Israeli diplomat: "Every appearance by an official Israeli representative in Scotland is like a visit to enemy territory"

Does Scotland manage to be anti-Israel without being anti-Semitic?
Anshel Pfeffer in Glasgow
Haaretz   2 November 2012

...How prevalent is anti-Semitism in Scotland? In a country where the official census records only 6,580 Jews - though the real number is probably somewhere around 10,000 - it is hard to gauge the scale of racism against the community, especially since no one I spoke to there seems to have ever personally experienced anti-Jewish bias...

There is a proud radical left-wing tradition in Scottish politics and public life...This previously included the anti-apartheid struggle and, in

...it seems that feeling among locals regarding Israel is much more negative than south of the border in England.(1) The BDS (boycott, divestment, sanctions ) movement calling for a ban on anything Israel-related is particularly prevalent in Glasgow. In the city center there are weekly demonstrations outside branches of the Waitrose and Marks & Spencer chains, calling upon shoppers to boycott them until they stop selling Israeli products.

In Edinburgh, pro-Palestinian campaigners have lobbied the city council not to hire French utility company Veolia, due to its work on the Jerusalem light rail system. And while similar boycott efforts also occur in England, there is a consensus that "it's worse in Scotland."

This was demonstrated very clearly in February 2011, when Israeli diplomat Ishmael Khaldi was invited to speak by the University of Edinburgh's Jewish society. As he began to speak, dozens of activists from the Scottish Palestine Solidarity Campaign (SPSC ) stormed in, pulled down the podium and prevented him from uttering a word. Khaldi, a Bedouin, was called a Nazi(3) by the protesters and, for over an hour, was not allowed to continue and eventually left without speaking...

The head of SPSC, Mick Napier, said..."We have a record of not tolerating any species of racism and anti-Semitism. We work very hard to distinguish between them and it is our opponents who seek to conflate the two issues. A national flag is a political symbol and an Israeli flag is provocation to people who see it as a symbol of a terrorist state." 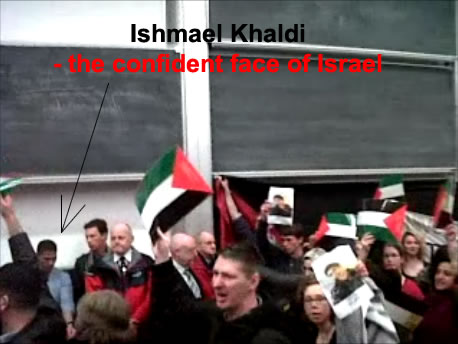 Scots with a political conscience are usually pro-Palestinian. Dundee's council voted to twin itself with Nablus as far back as 1980, and some members of the community remember anti-Israeli graffiti on the local synagogue around that time. In 2007 Glasgow was paired up with Bethlehem, but there are no similar relations with Israeli cities.

Anti-Israel motions and initiatives will usually be sponsored by a member of the largest party in the Scottish Parliament, the Scottish National Party. Unlike other major British parties, the SNP does not have a "Friends of Israel" association. "It's the left-wing tradition but also the fact that the Muslim community here is much larger than the Jewish one, and SNP politicians are pandering for votes," says one Jewish activist...

The SPSC is considered provocative(4) even by its English counterparts. Among the group's stunts is the annual event it holds to commemorate the Holocaust with Hamas supporters(5) speaking of Palestinian suffering. But SPSC head Napier insists: "We keep anti-Zionism and anti-Semitism strictly apart. Scots have always been very friendly to Jews."

Life isn't simple for Scottish Zionists, either. "We were always very strong Zionist left-wingers here," says Mervyn Lovat, a lecturer at Glasgow Business School, "but it's getting more and more difficult to be supportive of Israel, especially since two of my sons moved there. I just can't understand why they [Israel] do those things."

Says Nick Black, a member of the Glasgow Jewish Representative Council: "You have to support Israel, whatever it does, because if you criticize here in Scotland, there will be those who exploit what you say." 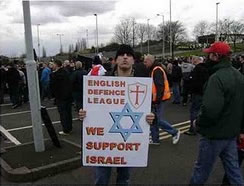 cted from a substantial article in Haaretz 2 November 2012

(1) There is no evidence for this.  On the contrary, popular opinion in every country in Europe is hostile to Israeli behaviour.This is consistent around the planet and over time.  There is nothing exceptional about Scottish public opinion - Dundee is much like Doncaster.

(2) The protest was organised by Students for Justice for Palestine, supported by Scottish PSC members.

(3) It was actually Khaldi's boss, Israeli Foreign Minister Avigdor Lieberman who was labelled a Nazi.  One defender of Israel at the protest disputed the 'Nazi' label and claimed that Lieberman was 'just a racist'.

(4) SPSC would dispute whether foursquare defence of human rights and opposition to ethic cleansing is in any way 'provocative'.

(5) Not 'stunts; -  we also host many types of speaker, including an Auschwitz survivor who was censored by the official Holocaust Memorial Day authorities