"...in May 2010 then-First Minister Alex Salmond rightly attacked the idea that Scottish Jews "should be judged or affected by the policies of Israel. The Jewish community is not liable for those policies”. It is therefore troubling that the Lord Advocate has now accepted the Zionist claim that the Israel State represents in some way Scottish Jews. Having officially endorsed this central tenet of Zionism, the Lord Advocate’s office cannot now offer justice to the victims of Zionism, the Scottish-Palestinian community, nor to political opponents of Zionism". 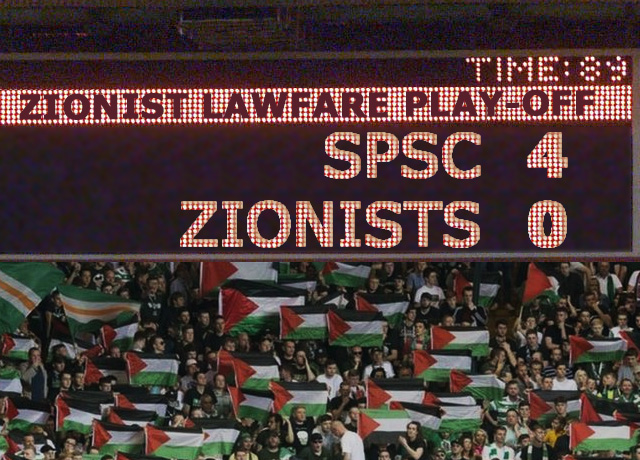 w Sheriff Court charges that SPSC members Jim Watson and I have faced for the last 25 months, including aggravated trespass and racial aggravation arising out of BDS campaigning in Braehead Shopping Centre were deserted due to the presiding Sheriff’s illness.

That now means that four vicious legal attacks over eight years on SPSC members have failed (with two feeble efforts outstanding ). Ally Coutts in Aberdeen is still charged with saying ‘Viva Palestina’ within earshot of an Israeli Dae Sea cosmetics stall that was selling goods made from materials pillaged from occupied Palestinian land. Four members who protested inside Barclays Argyle Street, Glasgow Branch against investments in arms companies face charges of aggravated tresspass that would seem to have little chance of succeeding.

It remains to be seen whether a senior legal official, called a Procurator Fiscal in Scotland, will raise fresh "racism" charges within the next two months but the fact is that Jim and I currently have no racism charges that require to be disclosed. No charges mean bail conditions fall.

Disturbingly, FoI (freedom of information) requests from SPSC to the Procurator Fiscal offices reveal an overly-cosy relationship between legal officers in Scotland and pro-Israel lobbyists. The Israeli Embassy successfully sought a meeting with Scotland’s most senior legal official, the Lord Advocate, and legal experts of the Apartheid State to discuss “Jewish relationships in Scotland” and the “Israeli and Scottish prosecutorial systems”.

It is not clear why the Lord Advocate would meet with the diplomats of a foreign state to discuss issues affecting a Scottish community nor how Scottish legal experts could learn from experts running an openly racist legal system.

It’s one thing for Polish, Chinese or Israeli diplomats to meet Scottish officials to discuss the Polish, Chinese or Israeli communities living in Scotland but in May 2010 then-First Minister Alex Salmond rightly attacked the idea that Scottish Jews "should be judged or affected by the policies of Israel. The Jewish community is not liable for those policies”. It is therefore troubling that the Lord Advocate has now accepted the partisan Zionist claim that the Israel State represents in some way Scottish Jews. Having officially endorsed this central tenet of Zionism, the Lord Advocate’s office cannot now offer justice to the victims of Zionism, the Scottish-Palestinian community, nor to political opponents of Zionism.

At stake is our right to campaign peacefully for boycott against the genocidal State of Israel, a right the Westminster Government has openly said it will try to revoke, building of previous efforts by PM Gordon Brown. The trials of SPSC members past, ongoing and future are our contribution to the worldwide campaign for BDS and the lavishly financed worldwide campaign against BDS being waged by the Israeli Government with, possibly, support from the Lord Advocate on behalf of the Scottish Government.