Scottish Government Facing Both Ways over IHRA, Bracadale and Apartheid 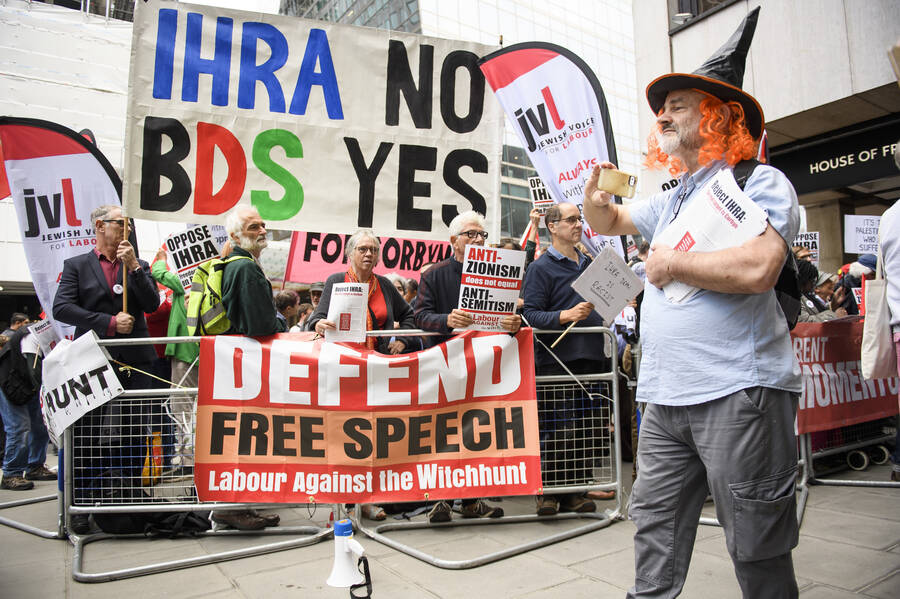 A major contradiction is being played out by the Scottish Government. It has adopted the IHRA definition whilst at the same time accepting the key recommendation in Lord Bracadale’s review regarding political entities (such as Israel or Zionism) in which he stated ‘…hate crime legislation should not extend to political entities as protected characteristics. I consider that such an approach would extend the concept of hate crime too far and dilute its impact. The freedom of speech to engage in political protest is vitally important.'"

The Scottish Government, like a number of local councils and other public bodies, has adopted the International Holocaust Remembrance Alliance (IHRA) definition of antisemitism. It did this in 2018 at a time when pro-Israel groups in the UK had Jeremy Corbyn on the ropes and were emboldened by this to push the definition as widely as possible. Most likely the Scottish Government succumbed to pressure from one of these groups here in Scotland, such as the Scottish Council for Jewish Communities (SCoJeC), although perhaps fear alone of the predictable backlash for failure to do so was sufficient.

What is the IHRA definition?
The IHRA definition consists of a wordy piece of text followed by eleven examples of how anti-semitism might manifest itself, with seven of the eleven examples relating to Israel. You might ask why a commonly understood definition would not suffice, ie prejudice, hostility or discrimination against Jewish people because they are Jewish. The IHRA definition though has an entirely political purpose which is to expand the range of what is deemed antisemitism in order to limit criticism of Israel and to silence the voices of Palestinians and international solidarity support. This represents an attack on freedom of expression which is protected under article 10 the European Convention on Human Rights (ECHR), and this so-called definition has been severely criticised by prominent legal voices. See here and here

Bracadale Report
In January 2017 Lord Bracadale, a retired Sottish judge, was tasked by the Scottish Government to review hate crime legislation in Scotland and his report was published in 2018.  Recommendations from this review were accommodated in what became the Hate Crime and Public Order (Scotland) Act 2021. This has led to a major contradiction being played out by the Scottish Government. It has adopted the IHRA definition whilst at the same time accepting the key recommendation in Lord Bracadale’s review regarding political entities (such as Israel or Zionism) in which he stated,

‘…  hate crime legislation should not extend to political entities as protected characteristics. I consider that such an approach would extend the concept of hate crime too far and dilute its impact. The freedom of speech to engage in political protest is vitally important. For these reasons I do not recommend extending the range of protected characteristics to include political entities.’

And regarding this point he highlighted an example involving Scottish Palestinian Solidarity Campaign,

‘It may be helpful to explore this issue through examples based on cases which have come before the court. In one case, members of the Scottish Palestine Solidarity Campaign shouted slogans during a concert at which the Jerusalem string quartet was performing. These included "they are Israeli army musicians"; "genocide in Gaza"; "end genocide in Gaza"; "boycott Israel". The accused were members of a political organisation which campaigns against Israeli occupation of the Palestinian Territories and advocates boycott. The content of their remarks was political in nature, including a call for a boycott. The evidence did not permit the inference that their comments were made because they presumed the musicians to be Israeli or Jewish.’

Apartheid
The practice of apartheid breaches international law. It is not a crime only associated with the South African experience and it is defined, for universal application, in the 1973 International Convention on the Suppression and Punishment of the Crime of Apartheid (the Apartheid Convention) and also under the Rome Statute of the International Criminal Court 2002 in which it is categorised as a ‘crime against humanity’.

Furthermore three major human rights reports over the last 18 months by Amnesty International, Human Rights Watch and B'tselem have provided extensive evidence that Israel is committing the crimes of apartheid and persecution against Palestinians in all areas that it rules over, ie the West Bank and East Jerusalem, Gaza and inside Israel as well where discriminatory laws, practices and policies have at times been overlooked because the focus has been on the experience of Palestinians in the areas Israel occupied in 1967. Looking at some elements of the IHRA definition we can see how its content lacks credibility and how recognition of Israel as an apartheid state strongly reinforces this view. For instance in the preamble to the examples of anti-semitism it states,

‘Manifestations might include the targeting of the state of Israel, conceived as a Jewish collectivity. However, criticism of Israel similar to that levelled against any other country cannot be regarded as antisemitic.’

Israel is an apartheid state, as was South Africa, and under international law it is a duty to take action to end such a situation. International bodies and citizens targeted South Africa with wide-ranging boycotts, divestments and sanctions and these actions contributed to the defeat of apartheid there. Furthermore, the notion that the level of criticism of one state cannot exceed criticism of another is absurd. States are criticised for what they do and the more egregious the conduct the more criticism is deserved. No doubt this type of example is not designed for general use, for instance to moderate criticism of Russia or Iran to ‘normal’ levels. We might also question how this bizarre calculation is administered, how accumulated levels of criticism directed at states are measured and who is arbiter of what is acceptable.

And the seventh of the listed examples states,

‘Denying the Jewish people their right to self-determination, e.g., by claiming that the existence of a State of Israel is a racist endeavour.’

It is perverse to suggest that calling an apartheid state a ‘racist endeavour’ is itself racist. Zionism has been a project of colonisation for over one hundred years with the objective of taking control of all land in Palestine and transferring (ethnically cleansing) the Palestinian population where possible. Israel was established in 1948 and the apartheid nature of this state is in fact the consequence of its failure to complete the elimination of all Palestinians. The Jewish population in Israel and the occupied territories is the result of large-scale immigration to Palestine from the late 19th century onwards.  There can be no right of self-determination that is achieved by denying this right to other people who had lived there for centuries.

And the eighth example states,

‘Applying double standards by requiring of it a behaviour not expected or demanded of any other democratic nation.’

An apartheid state is by definition not a democratic state. Israel is the world’s only apartheid state and its combination of discriminatory laws, practices and policies, which are enforced by extreme violence, have no equivalence anywhere else.

What should we conclude?
The IHRA definition is surely holed well below the waterline. It is not a legal instrument incorporated into any legislation, nor is it compatible with elements of domestic and international law or the ECHR. Yet it remains a dangerous tool and has already been used by public bodies to discipline and dismiss employees who have expressed criticism of Israel and Zionism, even when this occurred outwith working hours. The Bracadale recommendation that a political entity should not be a protected characteristic, which was accepted by the Scottish Government, together with the three major reports that identify Israel as an apartheid state, clearly combine to sink this Zionist inspired attack on freedom of expression. So unless the Scottish Government has now changed its position completely with regard to political entities and at the same time it rejects the findings of the apartheid reports, then it must deal with these contradictions by revoking its adoption of the IHRA definition. It is not at all likely however that this will happen without external pressure and increased publicity about how its current position is untenable.
Ian MacDonald
SPSC Edinburgh Branch
This email address is being protected from spambots. You need JavaScript enabled to view it.