I’m fed up talking about emergencies in Palestine 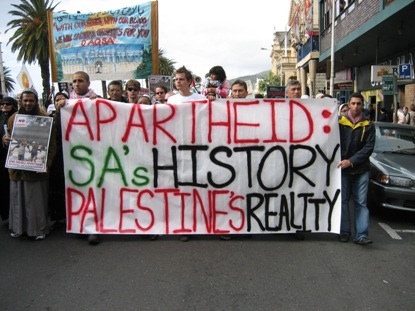 Below we reproduce an Edinburgh delegate's speech to the 2021 Aslef annual conference. The debate led to the 80 delegates (virtually unanimously with no votes against) passing what Aslef General Secretary Mick Whelan called "a motion in solidarity with the people of Palestine after recent attacks on them by the Israeli state. Whether it's the violence shown to Palestinians who simply want to gather at Damascus Gate, those facing expulsion from their homes in Sheikh Jarrah or the people of Gaza facing airstrikes that are killing hundreds of people including many children, Israel’s action are unacceptable, immoral and criminal...[only after] an end of the Israeli state's institutional racism towards Palestinians, the expansion of settlements, the siege of Gaza and occupation of the West Bank...will we see lasting peace and equality for Palestinians and Israelis...I urge all ASLEF members to support this struggle in whatever ways they can."
Mick Whelan 19 May 2021

"I’M FED up talking about emergencies in Palestine, after an emergency lasting more than 70 years. But, when the state of Israel has escalated its violence, Palestinians are calling on us to protest, to demonstrate our solidarity, and to take action. As they continue to resist the ongoing programme of ethnic cleansing.

"We must, of course, answer this call as generation after generation endures more suffering. Because, unfortunately, for decades much of the UK trade union movement was complicit – supportive of Zionism – and there are still elements of that today, but we can be proud in ASLEF to be unequivocal in our support for the victims of settler-colonialism, ethnic cleansing, discrimination, and apartheid.

"We need to change the narrative. You don’t get to drop an entire colony on top of an inhabited land, grind the inhabitants into the dirt for decades, and then claim self-defence every time they retaliate!

"The UN has stated that the violence is moving towards full-scale war. It isn’t. Full-scale war would require both sides to have the capability to wage a full-scale war. When one side in this conflict has one of the most advanced militaries in the world – indeed, is a nuclear power – while the other has a few home-made rockets, small arms, and stones to throw, shame on anyone who frames this crisis as some kind of equally matched conflict between warring nations."

‘There is an occupier, and an occupied’
"The narrative must change, and we should avoid the intentionally misleading narrative which is – at best – of ‘an insoluble and complex conflict’, with both sides responsible. It isn’t. It is, actually, very simple. There is an occupier, and an occupied. There are the ethnic cleaners, and the ethnically cleansed. There is discrimination, and the victims of that discrimination. Let us be clear – Zionism is racism.

"We talk a lot about equality, but there can be no equality in a state which, by its very nature, places one people above another. For more than 70 years, Israel has denied Palestinians their fundamental rights and has refused to comply with international law. This is only possible because of international support from a handful of governments, including our own, and facilitated by complicit corporations and other institutions. Israel’s occupation of Palestinian territories is illegal under international law so, by definition, Palestinian resistance to that occupation is legitimate.

"For over 70 years Palestinians have been resisting the brutal realities of this colonial project and what has become the world’s longest military occupation of modern times. It matters not whether that resistance is peaceful or violent. They are gunned down while protesting; bombed periodically; and denied basic human rights, including freedom of movement, and freedom from want or fear.

"People are asking what we can do – well, we can donate to Medical Aid for Palestinians to help with the immediate crisis, but, beyond that, the answer is boycott, divestment, and sanctions. Appeals for Israel to live up to its obligations under international law, and to our government to condemn Israel, are fine but, after 73 years, have proved to be ineffective.

"We must uphold the simple principle that Palestinians are entitled to the same rights as the rest of humanity. Israel is occupying – and colonising – land, discriminating against Palestinian citizens of Israel, and denying Palestinian refugees the right to return to their homes. The BDS campaign to pressure Israel to comply with international law is having an impact. Strategic action will make a difference – pressure on governments, institutions, universities, pension funds, and companies that are complicit. BDS is not dogma, but a strategy for effective solidarity – in a country as small, and trade-dependent, as Israel it could work.

‘A people that cannot return’
"‘When we take the diplomatic road, our people are dragged in a debate over our humanity,’ said the Palestinian writer Mariam Barghouti. ‘When we resist with arms, we are terrorists, and killed. When we resist through nonviolence, we are targeted and vilified. When we protest with our tongues, we are put in prison. When we rise up in protest we are sniped down and killed. When we are simply born Palestinian, we are destined to be a demographic threat, a people that cannot return home and, with all of this, what option are we left with? A silent death? Because god forbid oppressors get uncomfortable.’ We must ensure those oppressors have no opportunity to get comfortable."
Hussein Ezzedine,Aslef Edinburgh No 1 Branch secretary and also branch equality rep