These images are from the Algerian capital last Friday. The popular struggle against the corrupt old regime is building and the regime is retreating. Palestinian flags are always raised on the mass demonstrations in Algiers and across the country

Israel has powerful allies - atom bombs, and snipers licensed by the US and EU to massacre Palestinians. Trump has awarded a chunk of Syria to Israel. The US and EU arm the apartheid regime and award sweetheart economic deals. Israel is virtually a member of NATO. 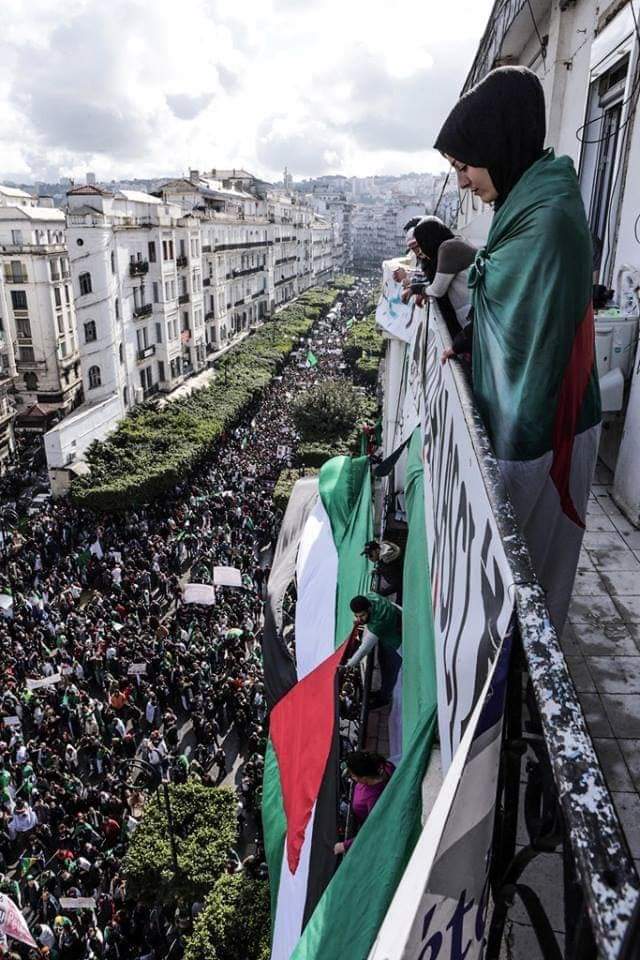 Israeli Minister Naftali Bennett boasted: ‘I’ve killed lots of Arabs in my life and there’s no problem with that’. His racist arrogance epitomises the racist regime that has educated hundreds of millions of Arabs who understand that they can never be free while the Palestinian people are caged by the Zionist State.

Arab people will not be kept under the thieving princes and emirs or the corrupt army regimes of Sisi and his like. The Algerian people are defeating their regime and in this struggle they are inspired, proud, exhilarated by the resistance of their Palestinian sisters and brothers.

The old regime in Algiers is retreating in the face of the mass movement, and this in turn carries a message of hope of eventual freedom back to the Palestinian people groaning under a genocidal regime. This racist state enjoys the protection of the US and EU, and behaves like a latter-day Crusader State. The streets of Algiers join Palestine in producing many latter-day worthy heirs of Saladin.

Mick Napier
26 March 2019
This email address is being protected from spambots. You need JavaScript enabled to view it.