June 26 2013 – As more than 150 Palestine solidarity and social justice organizations from across the world, we stand in solidarity with all of the French campaigners for Palestinian rights facing legal action and repression for participating in demonstrations calling for a boycott of Israel.

French campaigners have faced criminal charges for their solidarity activity since 2009. Despite a previous ruling that advocating boycott is not illegal and should be permitted as part of the right to freedom of speech, three activists were brought to trial earlier this month in Perpignan, seven more will attend court on June 27 in Alencon and further trials w 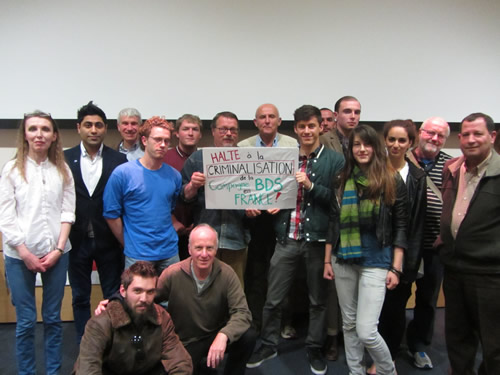 In all of these cases, campaigners have been charged with "incitement, provocation to discrimination, hatred or violence against a person or group of persons, due to their ethnicity, race, religion or nation" following their participation in actions at supermarkets calling for a boycott of Israeli goods.

This misuse of anti-discrimination law is part of a wider attack on solidarity with the Palestinian people. French pro-Israel organizations are plaintiffs in many of the cases against boycott activists and have successfully pressured the French government to support repression of solidarity activity. In 2010, then justice minister Michèle Alliot Marie ordered prosecutors to press charges against boycott, divestment and sanctions (BDS) activists. Police regularly demand the names and addresses of those present at protests calling for a boycott of Israel and Israeli intelligence agency Mossad was deployed to stop protests at a basketball match involving an Israeli team that took place in France.

Alarmed by the growth of solidarity with the Palestinian people and the BDS movement in particular, Israel and leading Israeli think tanks have made clear their desire to sabotage and disrupt solidarity activism. Senior Israeli foreign ministry official Amir Sagie recently admitted that the Israeli government has been "investing heavily" in legal warfare against BDS in France and other European countries.

To Bernard, Jeanne, Yamina, Alain, Chantal, Christine Francis, Jo, Nicole and Pierre, to all those facing criminal charges and the whole of the French movement: we stand with you.

While we cannot be with you as you demonstrate outside the court at the start of the next trial on June 27, we express our full support for your

efforts to build solidarity with the Palestinian people in the face of state repression. We cannot allow Israel to export its attacks on basic freedoms to Europe or anywhere else.

Inspired by the steadfastness of the Palestinian struggle and the resolve of the French BDS movement, we pledge to continue to work with the BDS movement in France to support their efforts to resist oppression and to continue to build the international movement for a boycott of Israel. 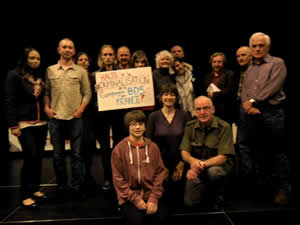 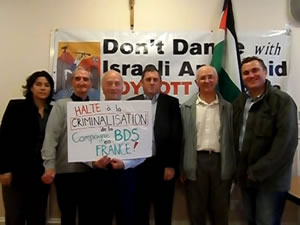 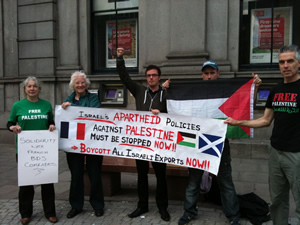