Show your support for BDS 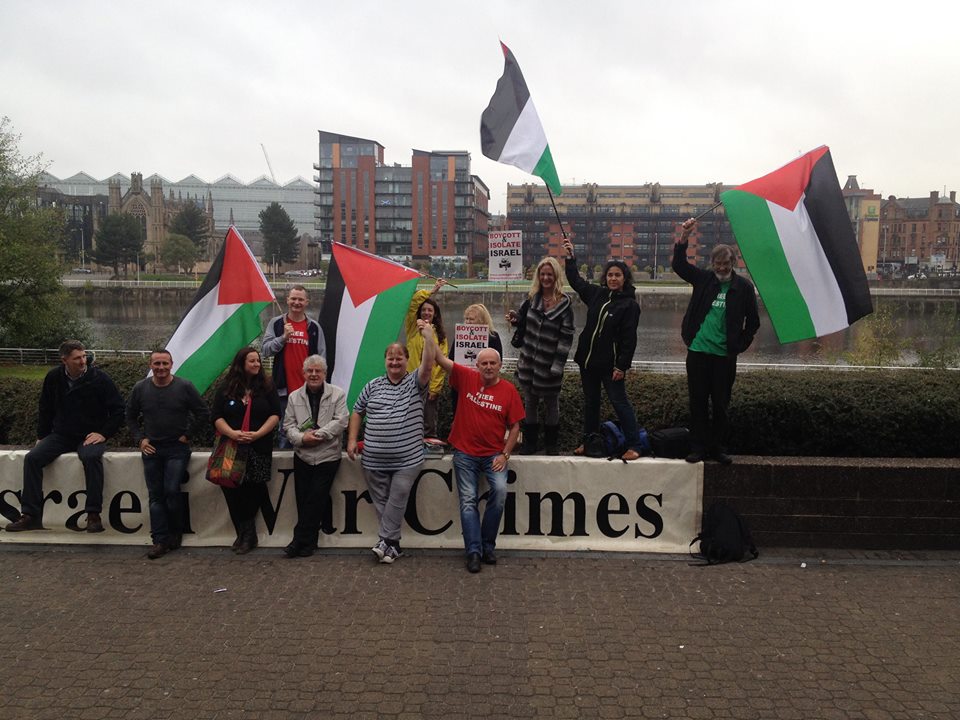 Mick Napier was arrested on Saturday (20th) night at this home for allegedly breaching his bail conditions. Following his arrest on 13 September, Mick along with another SPSC member were held in custody over the weekend before being released on police bail on Monday evening. A condition of the bail was that they should not go to within 500 meters of Braehead shopping centre until their court appearance scheduled for 9 October.

On the weekend when unionist thugs were allowed to rampage through Glasgow city centre, verbally abusing and assaulting other citizens, and only 5 arrests be made on the night, it beggars belief that the police would arrest someone in their own home at 10pm for allegedly going within 500 meters of a shop. The police did not divulge the source of the allegation.

Despite the previous week’s arrests SPSC members were out in force again on Saturday at Braehead. This week our protest was split into two separate groups, one inside and a group outside, Mick was not involved or present in either of these groups. Once again leafleting took place inside the shopping centre but this time there were no arrests. Similar protest in Edinburgh at the Ocean Terminal shopping centre carried on for 5 hours without even a police presence.

The actions of the police suggest a degree of victimisation. It is a mystery as to why we are allowed to leaflet at Braehead with no police intervention following previous events. Equally puzzling is that protests and leafleting inside the Edinburgh shopping centre are allowed to continue with much greater numbers and for a longer period, with police supporting the right to protest.

Mick will appear in Glasgow Sheriff Court on Monday 22 September. We ask supporters to meet outside the Court at 11am.

Two members of SPSC were arrested on Saturday 13 September whilst taking part in a peaceful protest against the sale of goods from stolen land. Under international law, an occupying power is forbidden from transferring its population onto occupied land and pillaging its natural resources. 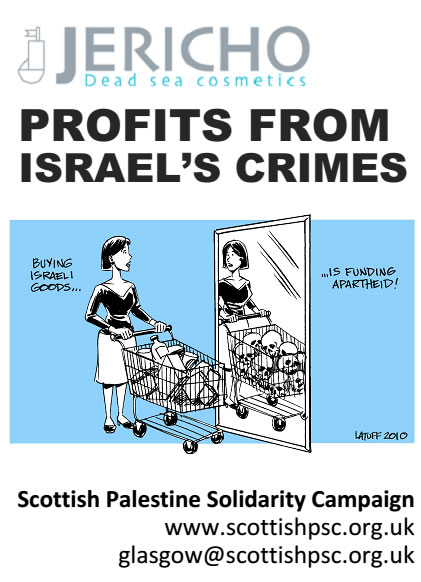 Jericho Dead Sea Cosmetics is one of a number of companies operating in small retail units selling goods containing Dead Sea minerals. Extensive research of the goods on sale reveals a deeply suspicious veil of secrecy on the part of these companies over the precise origin of the natural ingredients and the location of manufacture. A series of PO Box addresses and vague references to the “Israeli side of the Dead Sea” demonstrates a unwillingness which is designed to repudiate claims of these being stolen goods.

As part of the international BDS campaign, SPSC is actively campaigning for a boycott of Israeli Dead Sea products. The minerals used in the production of the cosmetics are taken from land which has been stolen from Palestinians, and to which access is denied.

“Since 1967, Israel has unlawfully appropriated vast portions of Palestinian land in the occupied Dead Sea area primarily to establish settlements and through these exerting a firm control over the region, including over its natural resources. Through the implementation of harsh restrictions on planning and movement, the Israeli authorities have severely hampered the ability of Palestinians to use and access their land and other natural resources in the region. The presence of settlers who directly utilise and profit from the Dead Sea wealth has severely exacerbated this situation and contributed to the over exploitation of the area, resulting in severe environmental damage.”

The significance of action against companies complicit with the the theft of Palestinian land has been highlighted most recently by the Scottish Government. All public bodies in Scotland, including government agencies and local councils, have been advised not to trade with companies that are active in settlements as they are illegal under international law.

“The Scottish Government strongly discourages trade with companies active in Israeli settlements which are recognised as illegal under international law.

The exploitation of assets in illegal settlements by any company is likely to constitute “grave professional misconduct” for the purposes of procurement legislation.

This government expects public sector contractors to maintain high standards of business and professional conduct. The policy note we have issued today underlines that expectation and advises purchasers to seek assurances that any Israeli-based company they consider entering into a contract with, is not in any way involved in illegal settlements.

Contracting authorities are also advised to seek assurances that any goods they are looking to procure which originate in Israel have not been produced in illegal settlements.”

Action against these outlets in Scotland escalated into formal boycott action following the Israeli attacks on Gaza in July and August. Stalls in St Enoch Centre and at the Silverburn Shopping Centre were closed down following protests and weekly protests are ongoing in Edinburgh.

The protests have been entirely peaceful despite the extreme provocation by Dead Sea stall staff promoting pro-Israel racist propaganda against Palestinians. In Edinburgh the police have been called on numerous occasions to answer demands from the stall operators and from the centre management that we be removed. Campaigners have refused requests to desist from handing out leaflets and refused requests to leave the centres.  Until yesterday, the police have also consistently confirmed that we have the right of access to shopping centres, describing them as a “public place”, and have the right to protest including the handing out of leaflets.

We have the right to pubic protest and as shopping centres are deemed to be public places there is no legal obstacle to the peaceful protest in which we are engaging. We believe the actions of Police Scotland and Braehead Shopping Centre Management to be ill judged and a denial of our human right to protest.