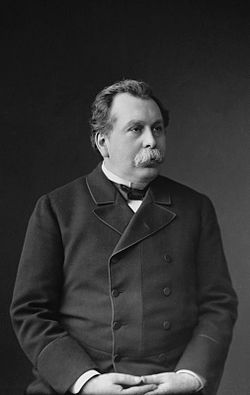 HERZL SEEKS SUPPORT OF  MASS MURDERER OF JEWS
On this day in 1903, Herzl arrived in St Petersburg to seek support for Zionism from Count Von Plehve, the Russian Minister of the Interior responsible for a notorious massacre of Jews in Kishinev. Herzl reported enthusiastically, “I have just come from Plehve. I have his positive, binding promise that in 15 years, at the maximum, he will effectuate for us a charter for Palestine. But this is tied to one condition: the Jewish revolutionaries shall cease their struggle against the Russian government”.

The founders of Zionism always opposed fighting the anti-Semites and regarded them as allies, because of a shared desire to remove the Jews from the countries in which they lived. Step by step, they assimilated the values of Jew-hatred and anti-Semitism, as the Zionist movement came to regard the anti-Semites themselves as their most reliable sponsors and protectors.

Herzl himself wrote of the Jews in the following fashion: “I achieved a freer attitude toward anti-Semitism, which I now began to understand historically and to pardon. Above all, I recognized the emptiness and futility of trying to ’combat’ anti-Semitism.”

The youth organization of the Zionists, Hashomer Hatzair (young Guard) published the following:

“A Jew is a caricature of a normal, natural human being, both physically and spiritually. As an individual in society he revolts and throws off the harness of social obligations, knows no order nor discipline...The Jewish people,” wrote Jabotinsky in the same vein, “is a very bad people; its neighbors hate it and rightly so...its only salvation lies in a general immigration to the land of Israel.”

Theodor Herzl approached Count Von Plehve, the author of the worst pogroms in Russia – the pogroms of Kishinev with the following proposition: “Help me to reach the land [Palestine] sooner and the revolt [against Czarist rule] will end.” Von Plehve agreed, and he undertook to finance the Zionist movement. He was later to complain to Herzl: “The Jews have been joining the revolutionary parties. We were sympathetic to your Zionist movement as long as it worked toward emigration. You don’t have to justify the movement to me. You are preaching to a convert.”  Herzl and Weizmann offered to help guarantee Czarist interests in Palestine and to rid Eastern Europe and Russia of those “noxious and subversive Anarcho-Bolshevik Jews”.

The same appeal was made by the Zionists to the Sultan of Turkey, the Kaiser in Germany, to French imperialism and to the British Raj.