The Lynching - during Edinburgh Fringe

Write a comment
·'Frankie wrote this after attending a performance of The Lynching in Whistable: 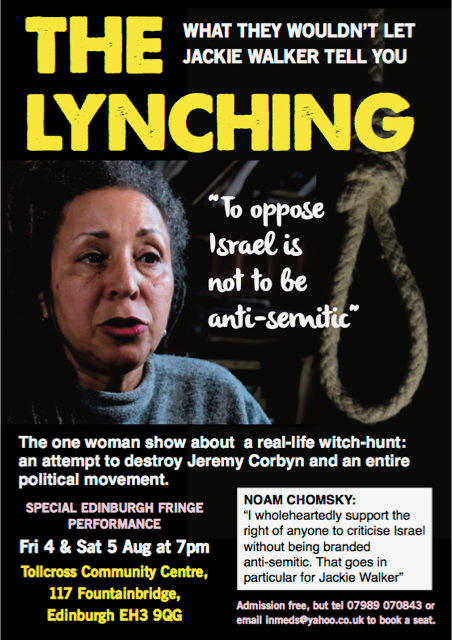 I was surprised to find that an event I attended at Whitstable Labour Club on Monday has been perceived as controversial by some in the local Labour Party, and even treated as being so problematic that it should not have happened. This seems to me so absurd it would be funny were the issues involved not so serious. Having seen Jackie Walker’s one-woman show twice and found it moving, interesting and important, as did others in the audience, I consider it a great shame that these critics didn’t take the opportunity to come along to engage in open discussion and find out the truth.

Clearly Jackie Walker has been the target of a sustained vicious smear campaign, threats and false accusations by an alliance of right-wing media, the Labour Party right and the pro-Israel lobby. This must have been as harrowing as it is insulting. Yet she continues to deal with it with dignity and honesty, answering all accusations flung at her, as her show makes clear.

Anyone who has not yet seen ‘The Lobby’, Al-Jazeera’s three-part investigation into the extent of Israel’s pernicious influence on and interference in British politics, and the lack of compunction with which organisations such as the Israeli embassy, the Labour Friends of Israel and the JLM deploy undemocratic methods against human rights defenders, should do so in order to understand the context in which this is happening. Despite this report’s vindication of Jackie, the campaign against her continues unabated. http://www.aljazeera.com/investigations/thelobby/

A Palestinian woman who attended Jackie’s show said during the Q & A session that the Palestinians greatly need support from progressive people outside Palestine in their struggle for human rights, the end to illegal occupation and apartheid and the torment they face daily. As international solidarity has grown, the truth of Palestinian dispossession known more widely, and the non-violent tactics of Boycott, Disinvestment and Sanctions take effect, so the backlash from the state of Israel has been ramped up.

For some people who joined the Labour Party recently it has been disappointing to witness the response of the local CLP to this smear campaign.

Attempts by concerned members to hold open debate on the issues or discuss the possibility of passing motions of solidarity were quashed by officers.

Thanet is our neighbouring constituency, in which lifelong anti-racist activists such as Jackie have fought tirelessly against UKIP and Farage. The lack of solidarity with her is shocking, leaving her defence to comrades nationally and international figures such as Noam Chomsky! It would be encouraging if Labour Party representatives shared the sense of shame and outrage many members feel over this.

If the right wing media and/or the Israel lobby wants to smear anyone, it will. It doesn’t matter how nice you are, how inoffensive or amenable you appear, how carefully you play the game, you will be lied about and falsely accused if it suits their purposes. As Chomsky made clear in the classic ‘Manufacturing Dissent’, the purpose of the media in a capitalist system is to obscure the workings of capitalism. Anyone on the left knows this. Anyone who remembers or knows about the McCarthy era should be extremely sceptical about witch-hunts, not be cowed or worried about guilt by association. Elected Labour representatives need to be able to withstand the way this nonsense is deployed. It would be a source of pride to many constituents if attempts to gag activists were challenged rather than colluded with, and an understanding of the need to uphold the basic socialist principle of solidarity was demonstrated. It is to be hoped that this will happen; it would be so much more positive if ways were found to support one another to resist campaigns of untruth which seek to divide us, rather than granting them credibility.
It would be good to feel confident in the hope that this could all be discussed in an informed, democratic and open way.

Yours sincerely, in the spirit of freedom of debate

Peter 8 days ago 10 June
https://www.facebook.com/stretfordhigh/posts/4101122909934164
Nicola Doward, Headmistress of Stretford High School ended her effort to steal the funds children had collected for the Palestinian victims of Israeli bombing and hand them over to an Israeli charity. She was taken aback by the furore.