The pro-Israel gang are working across the UK to support their one-day effort during the Edinburgh Fringe to openly promote the apartheid State of Israel as a beacon of tolerance. They are also trying to persuade Edinburgh City Council to cancel the booking for the conference on Settler Colonialism in Palestine on August 13th in Edinburgh.

CENSORSHIP
Stanley Grossman of Scottish Friends of Israel has written to Edinburgh City Council asking them to cancel the hire of Tollcross Community Centre for the Settler Colonialism in Palestine conference on Saturday August 13th. The dishonesty and stupidity of the pro-Israel gang in Scotland is never-ending, e.g. deceiving the First Minister of Scotland and having to pulp 6,000 books as a consequence. 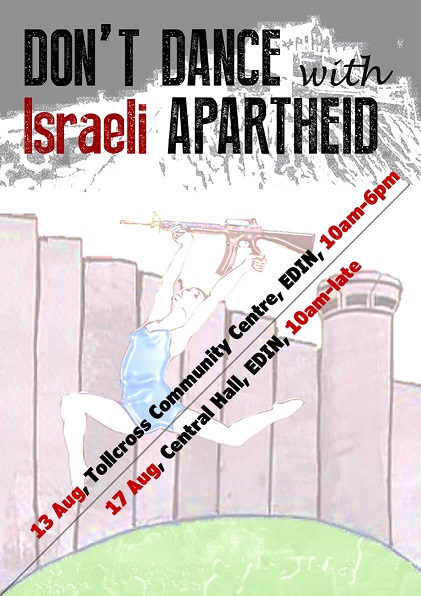 The conference they want to silence will hear from Ilan Pappé, Dr Ruba Salih of SOAS, and author Ben White. Omar Barghouti will open the event by video link from Ramallah.

ZIONISTS PULLING OUT THE STOPS
the pro-Israel thuggish element is mobilising UK-wide and beyond to defeat the BDS campaign and reverse the defeats they've suffered over "far too many years" in Edinburgh, which Mr. Simon Cobb, founder of Sussex Friends of Israel, calls "a hotbed" of BDS activism. For Mr Cobb and Co, it is "vitally important" to achieve on August 17th the "greatest success possible…[against a]…particularly odious and nasty arm of the anti-Zionist moveone partment, the Scottish Palestine Solidarity Campaign…where so many others have failed". (They don’t mention Hillary Rodham Clinton’s failed attempt to defeat a BDS campaign in Edinburgh.) Supporters of Israeli apartheid and ethnic cleansing are asked "to come to Edinburgh…make it a priority…to make this day a remarkable success…[in the]…most difficult of circumstances". Other thuggish pro-Israel elements may well show their faces.

STATE PROPAGANDA 'ART'
The organisers boast that the Shalom Festival is "officially recognized as part of the Fringe [where] modern day Israel will be celebrated". The scandal is that the Fringe is being used to publicise an event openly organised by an agent of the State of Israel to promote the interests of that State. One of the presentations will be of Krav maga, the martial arts used by the Israeli Army! Will an arms display be added in future 'Shalom' events? Doesn’t the Fringe have any red lines on agency and content? Write here to the Edinburgh Festival Fringe management to ask them to row back from this new policy.