"Hajo described from his own youth how dehumanisation of German society occurred in preparation for Auschwitz - different laws for Jews and Aryans, arrests without warrant, systematic indoctrination through propaganda - school books, comparison with insects, etc. He demonstrated how Israel was following the same course, the dehumanisation by Zionists in preparation for the repeated slaughters in Gaza." 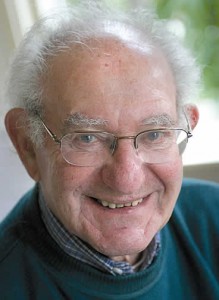 It is with great sadness that we received the news that Hajo Meyer died in his sleep two days ago (August 23, 2014). Hajo was 90 and, among other notable achievements in the field of science and music, served in the underground Dutch resistance to Nazi occupation during WWII. Hajo was captured and spent the last 10 months of that war in Auchwitz concentration camp until it was liberated by the the Red Army in January 1945.

What distinguished Hajo and some other Holocaust survivors was their insistance that 'Never again!' applied to everyone, and that the only proper homage to the masses killed by the Nazis and their allies was to defend all those subjected to racist dehumanisation similar to that which he as a young Jew had suffered under Nazi rule. Given the virulence of the dehumanisation process he described in detail being carried out by the Israeli State and its Zionist backers, he gave special attention to active solidarity with the Palestinian people.

Scottish Palestine Solidarity Campaign hosted Hajo during his Scottish speaking tour in 2010, together with Haider Eid from Gaza and Sara Kershnar of IJAN (International Jewish Anti-Zionist Network), during which he did not hesitate to compare Israel's dehumanisation of Palestinians and the bestial massacres of Palestinians in Gaza to the activities of the Nazis which he had experienced at first hand. Hajo's speaking tour on "The Misuse of the Holocaust for Political Purposes" generated huge publicity.

Hajo Meyer explained that his own personal conclusions based on what he saw during the ten months he spent in Aushwitz was that "only those who are themselves dehumanized can attempt to dehumanize others, I personally NEVER ever want to afflict suffering to anybody because I want to remain human."

Hajo described from his own youth how dehumanisation of German society occurred in preparation for Auschwitz - different laws for Jews and Aryans, arrests without warrant, systematic indoctrination through propaganda - school books, comparison with insects, etc. He demonstrated how Israel was following the same course, the dehumanisation by Zionists in preparation for the repeated slaughters in Gaza.

Shockingly, but unsurprisingly, the British Government banned all reference on the official Holocaust Memorial Day website and calendar to Hajo Meyer's talks on the subject of "Israeli mass killings in Palestine". In a written response to a letter from SPSC, the government said it deemed the content of the event "offensive" and that it was the trust's policy to bar anything "inappropriate."

"Holocaust Memorial Day Trust's policy is to prohibit from inclusion on its website any content that is deemed to be offensive," Andrew Stunell, Lib Dem MP and Minister for Communities and Local Government, said in a letter to SPSC .  Zionist CST chimed in with "It is offensive and perverse to use Holocaust Memorial Day as an excuse to attack Israel." So no chance to discuss mass killings of Palestinians in an event funded by the UK Government

. A letter to Scottish First Minister Alex Salmond asking him to support Hajo's right to be included in listings of Holocaust Memorial Day events drew a non-commital response.

In the spirit of Hajo Meyer's talks, I wrote on behalf of SPSC at the time that "We can work together to see that Nazi mass killings against Jews, Gypsies, Russians, Poles, Serbs, disabled people, homosexuals are remembered and lessons drawn that we must stop all mass killings, especially when our own government arms and supports the killers. We must remember the most revolting example of European state-directed racism to rededicate ourselves to opposing all state-directed racism, including the vicious form of apartheid existing in Israel today."

Hajo was small in physical stature but a giant-hearted individual, who went through the midnight of the century, the most hellish experience at the limit of human endurance, and came out with his humanity undimmed. He was endowed with huge energy as he approached 90, and some of us will treasure to memory of his time with us. We can be proud that he felt, and repeated more than once, that the solidarity he felt in Scotland with SPSC was the best he had experienced anywhere "except for Ireland". (Well, you can't win them all!)

While here in Scotland, Hajo extended his full solidarity to the five SPSC members who were then facing charges of "racially aggravated conduct" for disrupting an Israeli state-financed musical event in Edinburgh.

I called Hajo in his Dutch home last year to chat and to invite him to come to Scotland for a return visit; he thought about it but decided to stick to his decision to do no more speaking tours as he approached 90.

Our thoughts go out to Chris, his partner, in her bereavement.
Mick Napier
SPSC Secretary
West Calder
25 August 2014