"Walter Russell Mead, who warned Israel not to embrace Trump too strongly lest it is irrevocably stained in the eyes of American public opinion. Former U.S. Ambassador Martin Indyk was bleaker by far: For the first time in my life, he said, I am concerned about the future of the Jewish people, in America and in Israel. The Jewish people, he explained, have prospered and thrived within the established Western order that has existed since the end of World War II. Trump is coming to the White House just as that order is under threat, for a variety of reasons, and he may bring the entire structure crashing down."

Analysis: Israel’s Enthusiastic Embrace of President Trump - and Why It Might Be Dangerous
Chemi Shalev
Haaretz 26 Jan 2017

...American Jewish acquaintances at the Institute for National Security Studies conference in Tel Aviv this week...were astonished by the intensity of support for Donald Trump they encountered, in random conversations and in meetings with high officials. Israelis love Trump, they said, way more than Americans...

Israelis are more accustomed than other people to politicians whose limited vocabulary stands in inverse proportion to the intensity of the insults they hurl at rivals, which is par for the course on Israeli talk shows on television and in debates in Knesset committees. Trump’s obsession with the media, his hysterical gripes about not getting respect and his insane sensitivity to what he perceives as personal slights are all terra cognita for anyone who has lived with Netanyahu as prime minister for so long. The same is true of Trump’s incomprehensible combination of a l’état c’est moi, only-I-can-save-you attitude and his pathetic sense of eternal victimhood. The same mix was on vivid display in Netanyahu’s extraordinary speech in the Knesset this week about his own problems with the police, in which he said he did nothing wrong and that everyone, from the opposition through the media to the legal authorities, was conspiring against him.

Justice Minister Ayelet Shaked...identifies him with a defined worldview that got him elected, will accompany his presidency and will serve Israel’s best interests.

Israel, Shaked said, should be part of the global trend that includes Trump’s election, Britain’s Brexit, the rise of right-wing parties in Europe, the increasing restrictions on movement of refugees and more. “One of the common threads connecting these events is the return of nations to the roots of their national identity in contrast to elites that champion globalization and multiculturalism,” Shaked noted, admiringly. It’s but a natural reaction, she said, to Islamic terror and mass migration. “The nations of the world are choosing to defend themselves, their identity and their nationalism. We should do the same,” she asserted.

In an article in Foreign Policy, Harvard professor Stephen Walt, the renowned international relations neo-realist, had a much harder time piecing together a coherent worldview that can be ascribed to Trump: “America’s New President is not a Rational Player,” was its title:

“Trump and some of his advisors (most notably Stephen Bannon) may be operating from a broad, Huntingtonian 'clash of civilizations' framework that informs both their aversion to multiculturalism at home and their identification of friends and foes abroad. In this essentially cultural, borderline racialist worldview, the (mostly white) Judeo-Christian world is under siege from various 'other' forces, especially Muslims. From this perspective, the ideal allies are not liberals who prize tolerance, diversity, and an open society, but rather hard-core blood-and-soil nationalists who like walls, borders, strong leaders, the suppression or marginalization of anyone who’s different and the promotion of a narrow and fairly traditional set of cultural values.”

Shaked, her party Habayit Hayehudi (The Jewish Home) and most of Israel's right wing ruling coalition could easily feel at home...It might not be long; after all, before Trump decides to rescind the citizenship of Muslims in America either, on the pretext that they entered the country fraudulently.

My American Jewish friends, however, were less concerned with the fate of Israeli Arabs than that of American Jews. They were dumbfounded, they said, by the complete lack of response in Israel to the manifestations of anti-Semitism that increased dramatically after Trump announced his intention to run for the presidency in June 2015...[and] noted that Shaked’s sentence about “return to the roots of national identity in contrast to elites that support globalization and multiculturalism” sounds like the kind of drivel one might find in most anti-Semitic publications. They also noted that in praising the rise of right-wing parties in Europe, Shaked didn’t seem bothered by the fact that while some of them might like Israel, most of them hate Jews, brazenly or latently. 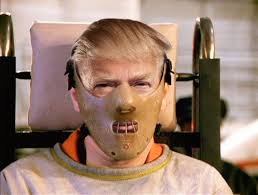 ...Israelis seem unmoved by, if not completely ignorant of, Trump’s erratic and problematic behavior. In the U.S., concerns about his emotional handicaps and incompetence to handle the presidency have not abated since his inauguration, but on the contrary. Trump’s first extensive interview with ABC News, broadcast on Wednesday night, did nothing to allay the suspicion that the American Commander in Chief lives in his own La La Land: He insisted on maintaining that his inauguration crowd was bigger, he repeated his absurd claim about millions of illegal votes, all of which, rather miraculously, were cast for Hillary Clinton. He compared Chicago to Afghanistan, insisted that Mexico pay for his wall – an issue that’s rapidly developing into a full blown bilateral crisis – and refused to retract his insane statement that the U.S. erred in not seizing Iraqi oil during the Iraq War, but may still get a second chance. In his first interview, Vanity Fair noted, the president “rejected reality.”

...Trump isn’t releasing any tax returns, although he promised, hasn’t resolved conflict of interest, although he pledged, and is under a heavy cloud of suspicion because of his ties and perhaps allegiance to the Kremlin. Barack Obama’s birth certificate wasn’t forged, Ted Cruz’s father wasn’t a part of JFK’s assassination, global warming is not a Chinese conspiracy and Trump does not head the greatest political movement in history. What difference does it make at this point, to quote someone else, when he’s the one sitting in the Oval Office and calling the shots?

You’re playing with fire, my frustrated interlocutors warned, clearly despondent by now. The same message was conveyed inside the INSS conference auditorium by noted political scientist and brilliant thinker Walter Russell Mead, who warned Israel not to embrace Trump too strongly lest it is irrevocably stained in the eyes of American public opinion. Former U.S. Ambassador Martin Indyk was bleaker by far: For the first time in my life, he said, I am concerned about the future of the Jewish people, in America and in Israel. The Jewish people, he explained, have prospered and thrived within the established Western order that has existed since the end of World War II. Trump is coming to the White House just as that order is under threat, for a variety of reasons, and he may bring the entire structure crashing down. But who cares if the Jewish people survive or don’t survive, I thought to myself, as long as Trump allows us to build a few more apartments in Beit El?