How can a degenerate group such as COFIS be endorsed by Nicola Sturgeon and a Scottish Labour Party leader? Support for the ongoing massacre of Palestinians - the shooting dead of 200 British citizens or Israeli Jews would qualify as a massacre - has not been enough for Scottish political leaders to distance themselves from COFIS (Confederation of Friends of Israel in Scotland), the group whose 'Peace Festival' they endorsed in summer 2016. Perhaps COFIS' active cooperation with the neo-Nazi BNP's past Treasurer, Max Dunbar, might persuade doubters that the pro-Israel campaign is toxic where their support for the latest racist mass murder of Palestinians failed to have them placed beyond the pale. 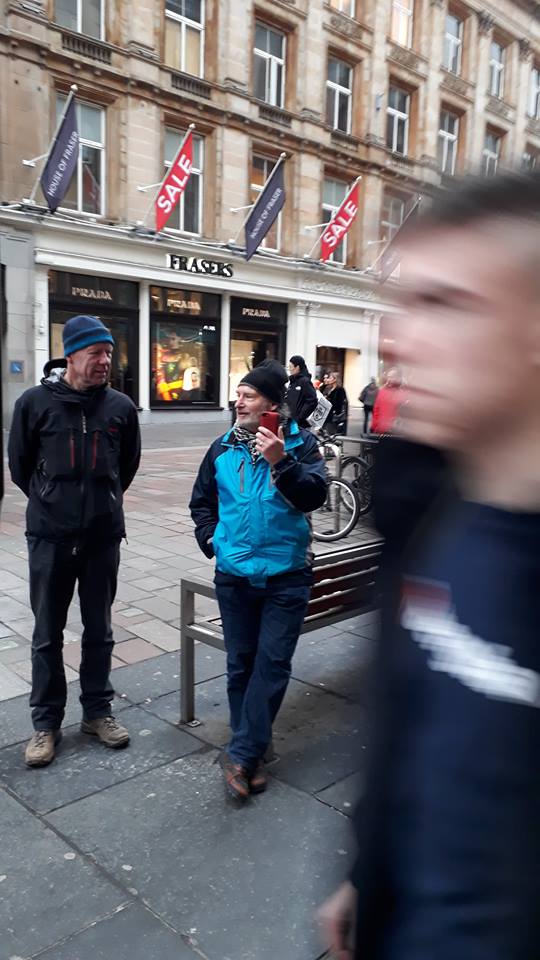 When I and another SPSC member, Jim Watson, were dragged through Glasgow Sheriff Court for three years on racism charges COFIS members attended many of the court hearings, sitting like hideous vultures on a branch waiting for a conviction. In vain; when the Sheriff threw out the racism charge as baseless, COFIS Leader Nigel Goodrich was so disappointed that he denied, and still denies, the published result.

One of those most assiduous in attending those innumerable appearances in Glasgow Sheriff Court was Mr Sammy Stein, a proud veteran of the Israeli Army despite that rabble of soldiery standing accused of war crimes and crimes against humanity. He so yearned for a 'racism' conviction against people who campaign for Palestinian freedom and human rights. Devoid of shame, defenders of the most racist society on earth wanted their opponents jailed for racism!

We now see the fellow working together with extreme anti-semites to harass and intimidate a street stall of the Scottish Palestine Solidarity Campaign. They were very clearly a double act yesterday on Buchanan Street, Glasgow, a street level version of Netanyahu's embrace of fascist and philo-Nazi groups and governments around the world, from Brazil to Hungary.

If my memory serves me right, the British Medical Association some years ago changed its designation of cigarette smoking and categorised the habit as an illness in itself rather than just a cause of many other illnesses. I wrote some time ago, and now think it was mistaken, to talk of Israel's embrace of the far right for that suggests that the Israeli settler colonial project is outside the realm of the extreme right and  making opportunistic alliances. Israel, on the contrary, is a natural component, an inspiration for the other factions, of the xenophobic, fascist and philo-Nazi right by virtue of its ongoing genocidal violence against mainly brown-skinned Palestinians.

Even the dullards of COFIS can smell the political sewage in the wind blowing from Tel Aviv; wee Sammy Stein just practised what the Tel Aviv regime preaches. Netanyahu has bonded with the Viktor Orbán Government in Hungary that is rehabilitating the WWII Nazi puppet, Admiral Horthy, who sent half a million Jews to the Nazi extermination camps. Glasgow Friends of Israel make common cause with neo-Nazi, Max Dunbar. In both cases the rationale is crystal clear; all that counts is that Orbán and Dunbar are strong supporters of Israel. Their naked anti-semitism is irrelevent. Conversely, however much Jeremy Corbyn and the rest of us oppose real anti-semitism consistently and on principle, the pro-Israel Gang doesn't care a whit because we oppose Israeli crimes or even the whole disastrous Zionist colonising project.

I read in November that petit bourgeois Steven Yaxley-Lennon, made over as working class "Tommy Robinson", was being taken on a tour of the US Congress and other venues where he hoped to net £1million in funds for his Islamophobic campaigning in the UK. The tour was being organised by an Israeli, Greg Roman*, ex advisor to a Minister in the Israeli Government; Yaxley-Lennon had visited Israel and gushed over the Israeli Army, getting photographed holding a firearm while standing on a tank. Another ex-BNP anti-semite who just loves Israel(i apartheid) and genocidal violence against brown-skinned people.

But does Nicola Sturgeon really know what she has endorsed? Does Stand Up to Racism (SUTR) know who or what they insist on allowing to join their anti-racism march yet again in March 2017? Can an organisation really be permitted to march "against racism" who talk of "euthanising" Palestinians?

COFIS posted, and many of its members endorsed, a report from one of their über-racist members in Jerusalem concerning "the murder of three Jews in Halamish and the euthanising of three rioters in Jerusalem." COFIS members, when they think they are among fellow-thinkers, use the language of "euthanising" Palestinians in exactly the same way the BNP's Yaxley-Lennon and Max Dunbar once discussed with their comrades how to deal with inferior races and groups, including Jews.

COFIS support genocidal racism but it is small consolation that many of the Christian fundamentalists who support Israeli massacres of Palestinians are also barking mad, sometimes deranged in their lust for Israel to fulfill Biblical prophecy, not to mention seemingly pagan astrological calculations to allow Israel to facilitate the end of the world. We should have learned, however, to fear mass irrationality, for it can sometimes saturate an army.

Faced with the rise of the far right, some formations such as the SNP and Labour Party may choose not to challenge them, just as they have turned a deaf ear to Palestinian calls for solidarity. It is something else, however, to help incubate political Ebola, in any of its forms - including its genocidal Zionist element. COFIS should be, by any yardstick, beyond the pale for the SNP and the Labour Party. Send them there and keep them there.

Mick Napier
West Calder
20 January 2019
This email address is being protected from spambots. You need JavaScript enabled to view it.