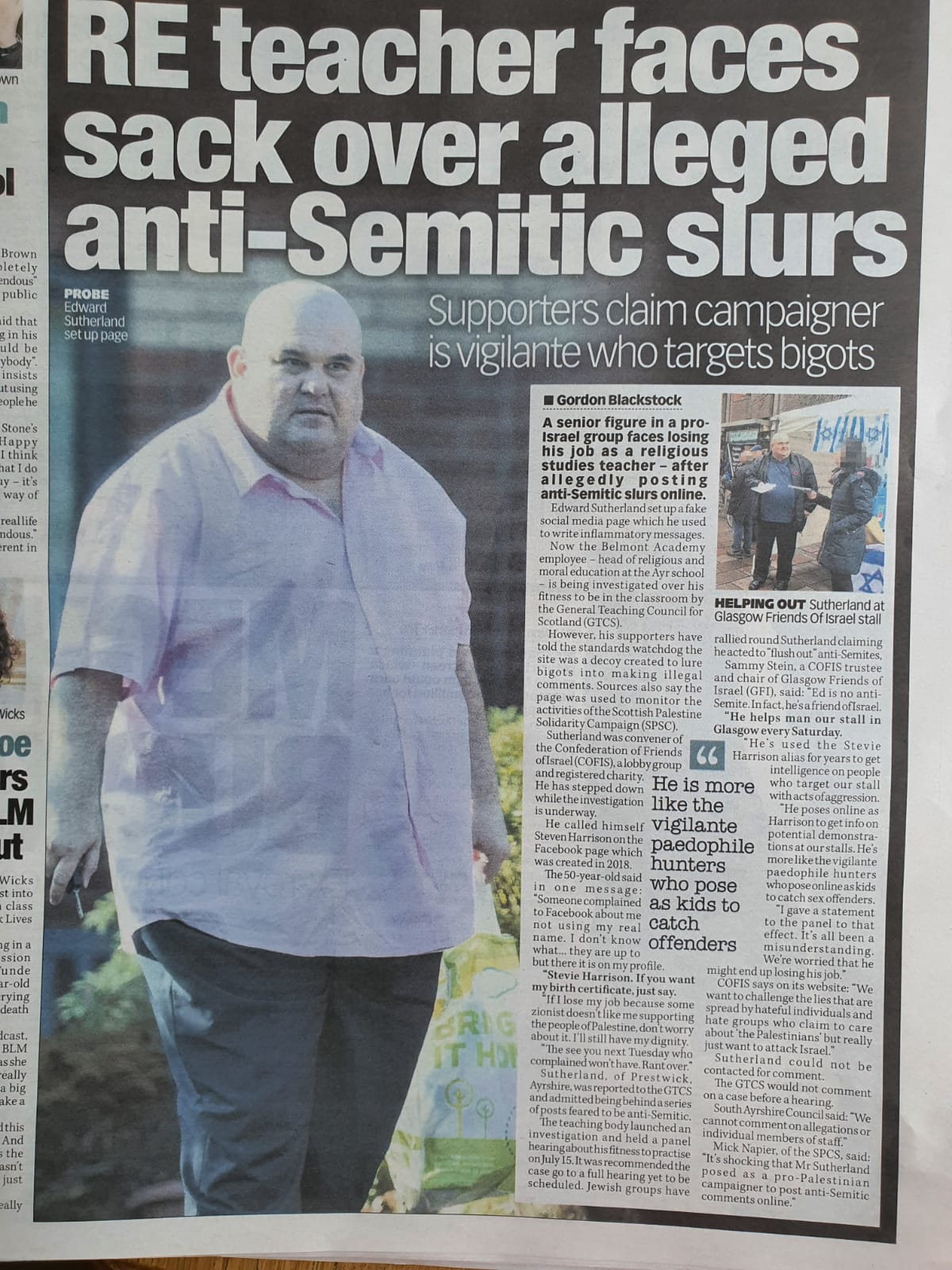 "senior figure in a pro-Israel group faces losing his job as a religious studies teacher" after he "set up a fake social media page which he used to write inflammatory messages. Sutherland was convener of the Confederation of Friends of Israel (COFIS), a lobby group and registered charity [who] called himself Steven Harrison on the Facebook page which was created in 2018."

The paper reveals that COFIS Convenor Sutherland "admitted being behind a series of posts feared to be anti-Semitic" after he was reported to the General Teaching Council Scotland for the subterfuge.

Sammy Stein,  a trustee of COFIS, which campaigns in support of Israeli crimes and chair of Glasgow Friends of Israel claimed: “Ed is no anti-Semite. In fact, he’s a friend of Israel," despite the fact that innumerable jew-haters are strongly supportive of the State of Israel

The group which Sutherland and Stein lead has an appalling record of posting racist slurs: admins posted to welcome the "euthanising" of Palestinians; members called for a young Muslim lawyer supporting Palestine to be strangled with her own scarf; one group of members  welcomed the 2019 massacre of Muslims in the New 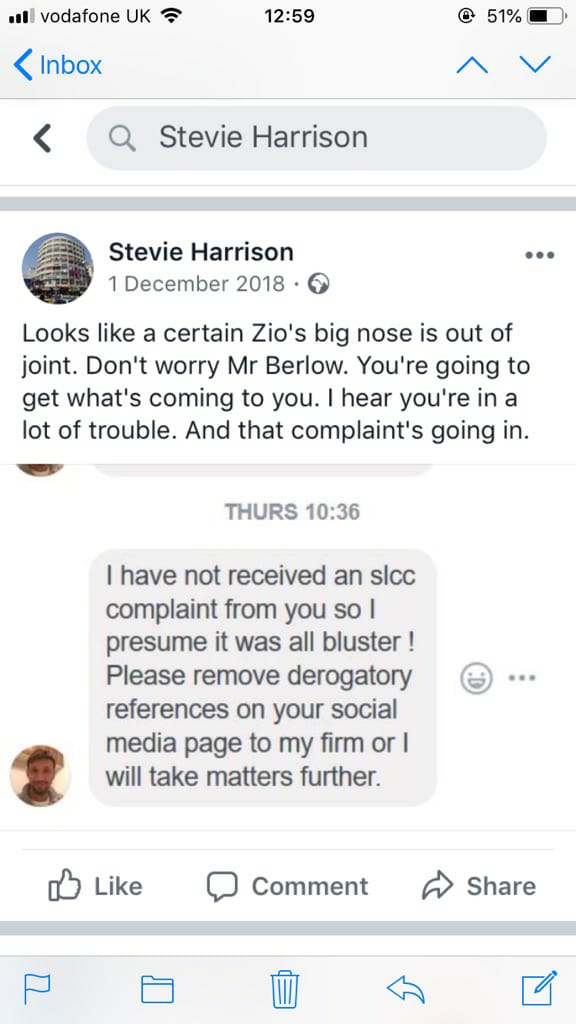 Zealand mosque as payback for "what Muslims have done".

Caught out yet again, the Friends of Israel claim their fake Facebook page was "used to monitor the activities of the Scottish Palestine Solidarity Campaign (SPSC)", a bizarre claim since all our posts are public and the witch hunters from the Embassy, including a blogger called Collier, have trawled through every word of every SPSC public utterance over twenty years without finding a scintilla of anti-semitic material on SPSC platforms or from anyone speaking for the campaign.

This did not stop a hack for the Murdoch press in Scotland, Alex Massie, safe behind Murdoch's billions that makes litigation hyper-expensive, peddling Collier's ludicrous attack piece in the Scottish Sunday Times. The dishonest Massie calculates such pieces will endear him to his fanatically pro-Israel boss or Murdoch's local satraps.

Sutherland was only the second Convenor of COFIS; his predecessor in the leadership post, group founder Nigel Goodrich, also left hurriedly after being outed in a scandal.

Christian fundamentalist Goodrich was revealed to be a member of a secret right wing Facebook group called Jewish Defence Forces, which included members jailed for violent assault, others who advocated the rape of Palestinian women, and sundry fascists. The Jewish Defence Forces Facebook group tells members their "Rule One" is, “This group is about ‘Palestine and Palestinians which doesn’t [sic] exist”

imed after the disclosure that COFIS had “dissociated ourselves from anything to do with Nigel. Full stop, everything and anything to do with Nigel.”  Stein's claim, however, should be taken with a very large pinch of salt; in addition to his group's record outlined above, Stein himself works openly with other extreme-right activists to harrass Palestine avocates. With such a record, he may well rank even lower than his Christian fundamentalist comrades.

The smear operation run by Sutherland for COFIS is linked to similar smearing activities in Scotland by SCoJeC (Scottish Council of Jewish Communities). As part of this coordination, SCOJeC provided a speaker for an August 2015 “political training day” organised by the “Embassy of Israel’s Scottish office”, a strategy session on how to smear advocates of Palestinian freedom as supposed anti-semites.

The revelations of SCoJeC's earlier dirty tricks should be read together with today's report of Edward Sutherland's posting of anti-semitic materials. SCoJeC dishonestly tried to dupe then-First Minister of Scotland into un-knowingly promoting allegations of antisemitism against SPSC. SCoJeC were caught out after they furtively inserted defamatory materials into a pamphlet after Alex Salmond had provided a preface for a version that had been scrutinised earlier and cleared by government lawyers. On that occasion, SCoJeC had to pulp all 6,000 copies of their publication.

Stein now defends Sutherland and tells the Sunday Mail, “Ed is no anti-Semite. In fact, he’s a friend of Israel." What does Edward Sutherland have in common with Donald Trump, Jair Bolsonaro,  and Stephen Yaxely-Lennon (aka Tommy Robinson) and many others? Each has a record of promoting anti-semitism and is strongly pro-Israel.

It is a disgrace that COFIS, an organisation with such an extensive record of publishing racist materials, should enjoy charitable status in Scotland and that one of their events in defence of Israeli war crimes was endorsed by the SNP. Scottish Labour and Scottish LibDem leaders.

OSCR, the Scottish body charged with overseeing charities, should revoke COFIS' charitable status immediately without waiting for the judgement of the GTCS tribunal as to whether Edward Sutherland is a fit person to teach moral education to Scottish children.

Mick Napier
16 August 2020
This email address is being protected from spambots. You need JavaScript enabled to view it.