These paranoids have nuclear weapons, courtesy of the West


The Pope and the cardinals of the Vatican help organize tours of Auschwitz for Hezbollah members to teach them how to wipe out Jews, according to a booklet being distributed to Israel Defense Forces soldiers. Officials encouraging the booklet's distribution include senior officers, such as Lt. Col. Tamir Shalom, the commander of the Nahshon Battalion of the Kfir Brigade.  The booklet was published by the Union of Orthodox Jewish Congregations of America, in cooperation with the chief rabbi of Safed, Rabbi Shmuel Eliahu, and has been distributed for the past few months.
The booklet, titled "On Either Side of the Border," purports to be the testimony of "a Hezbollah officer who spied for Israel." 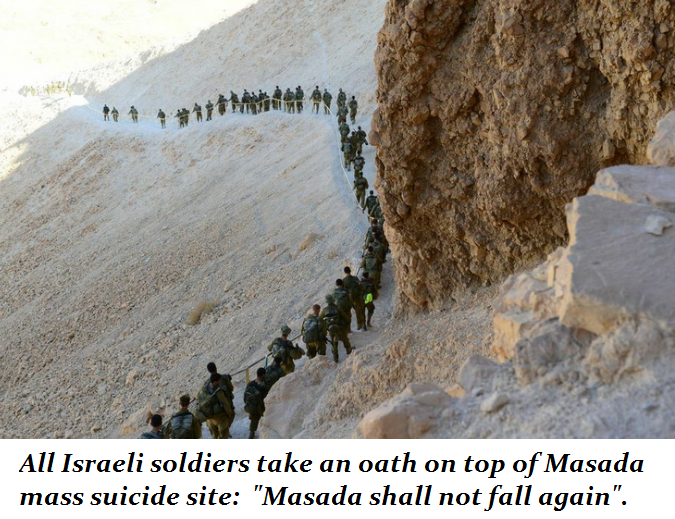 "The book is distributed regularly and everyone reads it and believes it," said one soldier. "It's filled with made-up details but is presented as a true story. A whole company of soldiers, adults, told me: 'Read this and you'll understand who the Arabs are.'"

The copy obtained by Haaretz included a Pesach greeting from Shalom, "in the name of the Nahshon Brigade."

The story is narrated by a man named Avi, who says he changed his name from Ibrahim after he left Hezbollah and converted to Judaism. Avi says he was once close to Hezbollah leader Sheikh Hassan Nasrallah, and describes Hezbollah's purported close relationships with the Vatican and European leaders.

The IDF Spokesman's Office said in a statement: "The book was received as a donation and distributed in good faith to the soldiers. After we were alerted to the sensitivity of its content, distribution was immediately halted."

According to the book, Nasrallah was invited to join a delegation to tour France, Poland and Italy, including the Vatican. Nasrallah could not refuse an invitation from the Vatican, Avi explained: "We knew [the Pope] identified with Hezbollah's struggle."

The book describes the alleged visit of Hezbollah officials to Auschwitz, led by the Vatican: "We came to the camps. We saw the trains, the platforms, the piles of eyeglasses and clothes ... We came to learn ... Our escort spoke as he was taught. We quickly explained to him: Every real Arab, deep inside, is kind of a fan of the Nazis."

The booklet also describes how European politicians and journalists ostensibly work against Israel.

"Our escort introduced us to important figures who identify with our causes. Rich people, people with authority ... They allocate big budgets to all sorts of Israeli organizations that erode the standing of the IDF ... We have a special budget for encouraging politicians and journalists who serve our purposes. Every opinion piece that conforms to our position is rewarded generously."

...David Menahemov, an aide to Eliahu, claims the book is not fiction. "Avi is a real person and everything in the book is absolutely true," insists Menahemov. "It's a totally true story, I know the guy personaly. He's an Arab, who even though he converted still acts like an Arab. We helped him to write and to translate it. We changed a few details to protect him and his family."