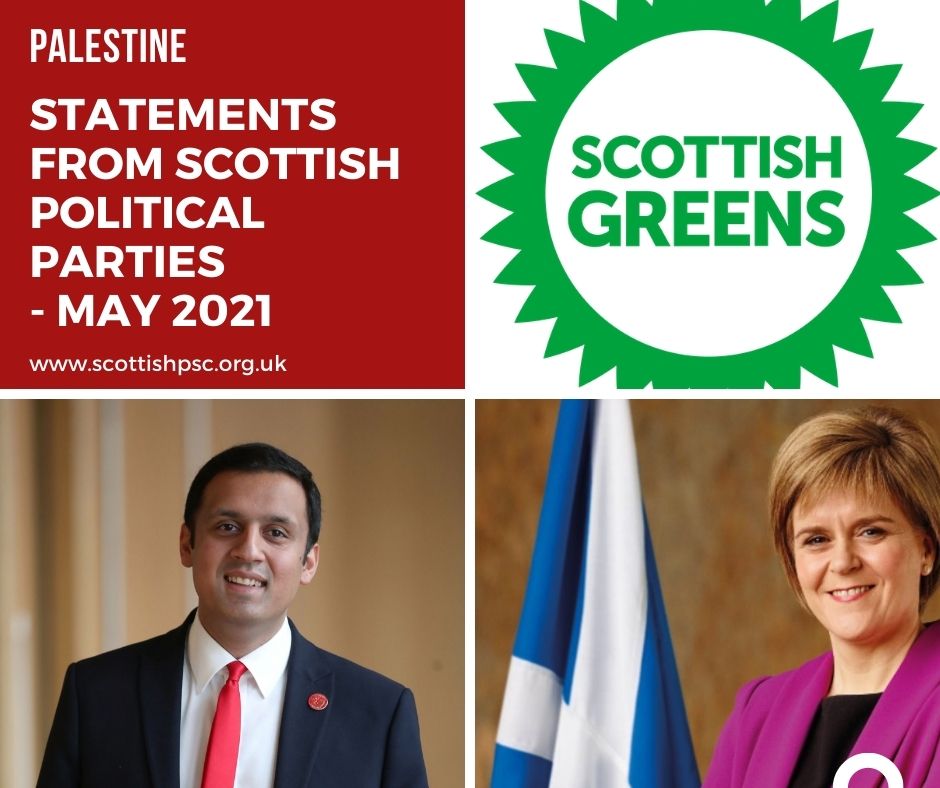 Statements from Scottish political parties, May 2021:

The Scottish Green Party strongly condemns the shocking violence perpetrated by Israeli forces at the Al Aqsa Mosque in occupied Jerusalem.  While attackinga  place of worship would be abhorrent at any time, to do so repeadtedly during the Muslim holy month of Ramadan is just one more reprehensible low for the Israeli state.

Furthermore, the ethnic cleansing of Palestinian families in the Sheikh Jarrah neighbourhood of East Jerusalem by violent settlers assisted by the Israeli security forces is completely unacceptable.  The international community must condemn this and put pressure on the Israeli state to cease these actions.

We reiterate our party's support for the Boycott, Divestment and Sanctions campaign to try and force the Israeli government to consider the consequences of their actions every time they oppress and brutalise the Palestinian people.

We would call on both the Scottish and UK governments as well as all other political parties to do the same.

As the First Minister of Scotland can I state unequivocally my condemnation of the unacceptable use of force by the Israeli Government against the people of Palestine that we have a recently witnessed.

Scotland prides itself as a beacon of Human Rights, we expect to not only uphold Human Rights domestically but the Government I lead will also call out human rights abuses wherever we see them.

It is a huge honour and privilege for me to represent the most diverse constituency in Scotland. I am lucky to have a vibrant Muslim community in Glasgow Southside and have had the pleasure of visiting many Mosques not just in my constituency but right across Scotland. I know just how sacred a place our Mosques are, and just how important the month of Ramadan is for Muslims across the world.

Attacking a place of worship is reprehensible at any time, to attack worshippers at the Mosque of Al Aqsa during Ramadan is utterly indefensible and I condemn it in the strongest possible terms.

With Foreign Affairs reserved to the UK Government I call on them to unreservedly condemn the unacceptable use of force we are witnessing. The UK Government and International community must not remain silent, any violation of international law must be investigated by the UN.

Be assured, the Scottish Government I lead will continue to stand up for human rights for those in Palestine and right across the world.

Good evening and asalam u alaikum.

The scenes from Masjid Al Aqsa over the last few days have been devasting.  The extreme force deployed by Israeli police, firing rubber coated bullets and stun grenades towards worshippers, displays a distressing disregard for the sanctity of the holy site and human life.

Their actions violated the mosque and have left hundreds injured, but they also violated international law.  There is no justification for such action or brutality at any time, but it is particularly reprehensible during the holy month of Ramadan.

These actions by the Israeli security forces are sadly not a one off but an escalation of violence towards those who have been protesting the forced evictions planned in East Jerusalem.  The violent actions are utterly reprehensible and unjustified.

Forced evictions in the Sheikh Jarrah and Silwan neighbourhoods would violate international law and cannot be allowed to proceed.
There must be international condemnation. We stand shoulder to shoulder with the Palestinian people today.

I join with those who are calling for an immediate cessation of violence and for these evictions to be stopped.  Israel must respect and uphold its human rights obligation; no nation is exempt from international law.  Governments across the United Kingdom must be united in our condemnation of this behaviour, as must the entire international community.

The Palestinian people continue to be oppressed by the siege of Gaza and the continued settlement growth in the West Bank. Now we see an attack on the holy site of Al Aqsa.  Anyone that believes in humanity, in justice, in fairness and in peace will condemn these actions.

But brothers and sisters, condemnation is not enough. Words are not enough.

If there is such a thing as the “international community” then there must be meaningful action to deliver freedom, justice and peace.