False Lothian & Borders Police claim #2:
L&BP claim Napier was "being pretty loud on the pavement shouting about the treatment of Palestinians".
The video evidence, however, shows this to be a police fabrication.

False Lothian & Borders Police claim #3:
L&BP claim “the officer involved acted in good faith during a difficult operational situation”.
The video evidence, however, shows a very relaxed group of officers prior to the sudden attack and handcuffing. 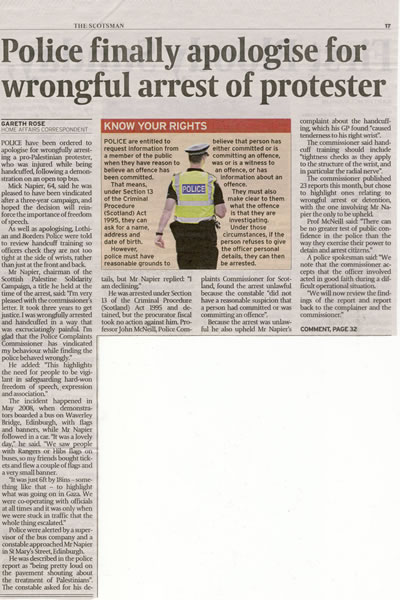 POLICE have been ordered to apologise for wrongfully arresting a pro-Palestinian protester, who was injured while being handcuffed, following a demonstration on an open top bus.
Mick Napier, 64, said he was pleased to have been vindicated after a three-year campaign, and hoped the decision will reinforce the importance of freedom of speech.

As well as apologising, Lothian and Borders Police were told to review handcuff training so officers check they are not too tight at the side of wrists, rather than just at the front and back.

Mr Napier, chairman of the Scottish Palestine Solidarity Campaign, a title he held at the time of the arrest, said: "I'm very pleased with the commissioner's letter. It took three years to get justice. I was wrongfully arrested and handcuffed in a way that was excruciatingly painful. I'm glad that the Police Complaints Commissioner has vindicated my behaviour while finding the police behaved wrongly."

He added: "This highlights the need for people to be vigilant in safeguarding hard-won freedom of speech, expression and association."

The incident happened in May 2008, when demonstrators boarded a bus on Waverley Bridge, Edinburgh, with flags and banners, while Mr Napier followed in a car. "It was a lovely day," he said. "We saw people with Rangers or Hibs flags on buses, so my friends bought tickets and flew a couple of flags and a very small banner.

"It was just 6ft by 18ins - something like that - to highlight what was going on in Gaza. We were co-operating with officials at all times and it was only when we were stuck in traffic that the whole thing escalated."

Police were alerted by a supervisor of the bus company and a constable approached Mr Napier in St Mary's Street, Edinburgh.

He was described in the police report as "being pretty loud on the pavement shouting about the treatment of Palestinians". The constable asked for his details, but Mr Napier replied: "I am declining."

He was arrested under Section 13 of the Criminal Procedure (Scotland) Act 1995 and detained, but the procurator fiscal took no action against him.

Professor John McNeill, Police Complaints Commissioner for Scotland, found the arrest unlawful because the constable "did not have a reasonable suspicion that a person had committed or was committing an offence".

Because the arrest was unlawful he also upheld Mr Napier's complaint about the handcuffing, which his GP found "caused tenderness to his right wrist".

The commissioner said handcuff training should include "tightness checks as they apply to the structure of the wrist, and in particular the radial nerve".

The commissioner published 23 reports this month, but chose to highlight ones relating to wrongful arrest or detention, with the one involving Mr Napier the only to be upheld.

Prof McNeill said: "There can be no greater test of public confidence in the police than the way they exercise their power to detain and arrest citizens."

A police spokesman said: ?"We note that the commissioner accepts that the officer involved acted in good faith during a difficult operational situation.

"We will now review the findings of the report and report back to the complainer and the commissioner."

Original article at The Scotsman 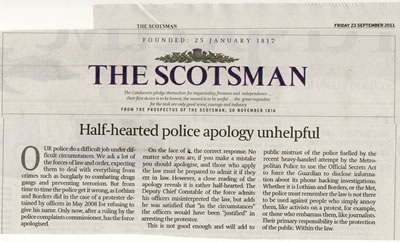 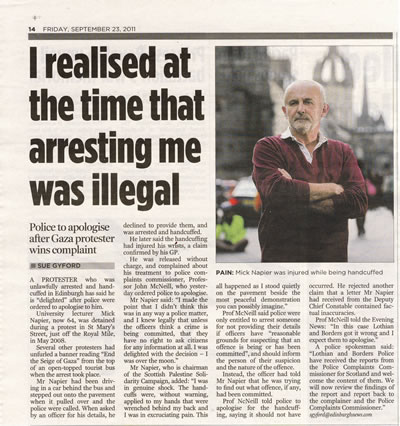