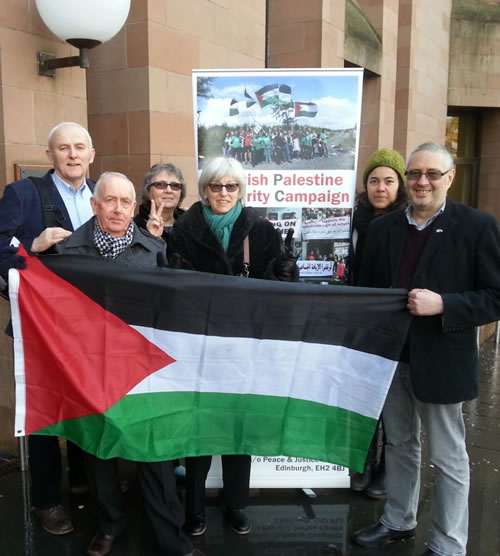 Challenges to the prosecution proved that the case had no basis in evidence leading the sheriff to halt the trial before a defence case was presented.

The case arose from a protest against the Jewish National Fund (JNF), an Israeli parastatal organisation that is involved in Israel’s settler colonisation of Palestinian territories and in the institutionalised apartheid and racism that discriminates against Palestinians citizens of Israel.  At the protest in June 2014, the last publicly organised fundraiser by the JNF in Scotland following years of protest by Scottish PSC, a JNF event steward and member of the Community Security Trust (CST) alleged assault by Mick Napier.  CST is a UK charity whose mandate is to record anti-Semitic incidents but is also involved in providing political support to the state of Israel.  Sheriff Watson upheld a no case to answer submission after Al Jazeera video footage demonstrated that no assault took place.

Scottish PSC Chair Sofiah MacLeod condemned the Crown’s decision to pursue the charge and expressed concern that “these charges appeared three months after the protest took place, following protests against Israel’s 2014 massacre of Palestinians in Gaza, protests in which Mick Napier was prominent as a Scottish PSC member.  There appears to be a pattern emerging of the Crown Office and Procurator Fiscal Service taking action against Palestine solidarity and BDS (boycott, divestment and sanctions) campaigners that amounts to harassment and an attempt to criminalise our solidarity with the Palestinian people.  We will be pursuing this matter with the Lord Advocate and Police Scotland.”

We need you – to join us in standing up for free speech, local democracy and to take forward the campaign for freedom and justice for Palestinians in the form of BDS.