Launch of Enduring Roots: A Century of Resistance to the JNF

Mon March 30 2015 saw the world-wide launch of the short film Enduring Roots: A Century of resistance to the JNF, released in an initial 14 languages with Greek, Finnish, Slovak and others in the pipeline. The Jewish National Fund, as the film explains, is “one of the most racist organisations in Israel”. Tony Blair and Gordon Brown are patrons of the UK section of this pillar of Israeli apartheid. The 39-minute film is a contribution by IJAN (International Jewish Anti-Zionist Network) to the fight against Israel’s ongoing violent, settler-colonial process of Judaization of all of Palestine.
(IJAN and SPSC are both partners in the Stop the JNF Campaign International)

Enduring Roots includes a report and analysis of the JNF involvement in Israel’s ethnic cleansing of the Bedouin Palestinians citizens of Israel, to make way for Jewish settlement.

The launch comes as the Israeli Embassy allocates to Scotland a full-time diplomat, Mr. Ishmael Khaldi, a Bedouin Palestinian who visited Scotland at least once before, while he was serving as an advisor to ex-nightclub bouncer and Israeli Foreign Minister, Avidor Lieberman. Lieberman is a violent thug who openly calls for the mass murder of Palestinian prisoners held in Israeli jails.

The appointment is a c 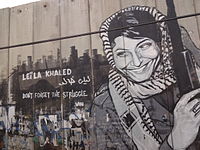 risis response to the Embassy’s sense that Scottish public opinion and civil society is increasingly angered at Israel’s treatment of the Palestinian people in Gaza, the West Bank and ’48-’68 Israel.

The Embassy hopes that Mr Khaldi will persuade some that their State is not based on Jewish supremacy, ethnic cleansing and genocide in Gaza. (The South African apartheid regime was also partly successful in co-opting some Blacks into accepting apartheid and others into fighting against the liberation struggle there.)

The Glasgow and Edinburgh film launches will also include a live talk from Amman, Jordan by Leila Khaled, iconic Palestinian figure, ex-fedayeen fighter and now an elected member of the Palestinian Legislative Council. Leila Khaled, like millions of Palestinians, is forced to live in exile.