The 51-Day War: Ruin and resistance in Gaza

The Israeli attack on Gaza was increasing in intensity a year ago.  Since the author is speaking at SPSC meetings across Scotland in August, I’ve just finished The 51 Day War: Ruin and Resistance in Gaza by Max Blumenthal and urge you to read it. Its 217 pages convey compelling and dramatic testimonies from Palestinians who last summer survived seven weeks of an Israeli killing spree, when over 40 people a day, overwhelmingly civilian non-combatants were sacrificed to maintain Israel’s ability to terrorise the entire region. 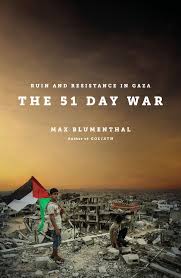 The killing and devastation was carried out using both indiscriminate and carefully targeted bombing and shelling. The author managed to enter Gaza during the war and the immediacy of his reports, his interviews with Palestinian survivors inside the killing zone, makes for compelling reading. In marked contrast to all mainstream UK media, the author contextualises the events he reports, providing a step by step run through the Israeli Government’s preparation for yet another war it wanted and planned for.

Israelis openly talk of “mowing the lawn” of Gaza, meaning periodic attacks and mass killings that weaken a resistance that they know they cannot extinguish. The high tonnage of Israel’s high explosives dropped on densely populated Shujaiya over two days in July, and the imprecision of some of the delivery mechanisms, led one US Defence Department official to observe to al Jazeera America that “The only possible reason for doing that is to kill a lot of people in as short a period of time as possible. It’s not mowing the lawn. It’s removing the topsoil.”

It’s a high-tech, overkill occupation. Israel uses its ‘Robocop’ remote-controlled machine guns along the walled perimeter of Gaza, together with Hermes 450 drones with Scottish components to isolate and maintain an intense surveillance system over the strip. Also key to the intelligence designed to find weaknesses that enable the Israelis to blackmail some into becoming collaborators, perhaps a need to access life-saving medical care for a loved one, is Israeli Army Unit 8200, whose graduates developed the military-grade Israeli ‘NICE’ surveillance system recently installed by Glasgow City Council.

Soldiers fired 3 million bullets over the 51 days and dropped more high explosives on Gazans than the US dropped on Hiroshima in 1945. Israel used 5,000lb bombs designed to penetrate underground nuclear installations to demolish some of Gaza’s high-rise residential buildings in an act of no military significance and only interpretable as an act of vandalism. It was the Dahiyah doctrine in action.

Israel field-tested sinister smaller munitions as well as huge bombs. More than one hospital director claims that a new type of wound they are seeing in their A&E is caused by Israel using DIME (Dense Inert Metal Explosives) weapons that cause tiny entry wounds and kill by extensively burning internal organs. Very often, though bullets were enough, as when Israeli soldiers stopped a group of families fleeing, asked if anyone spoke Hebrew and then shot dead the elderly man who stepped forward. This happened several times and no-one knows why. Knives were also used on a group of prisoners whom Israeli soldiers brought to a house in Khuza’a and despatched there.

The weapons did what they were supposed to do - kill large numbers of innocent civilians (as well as slaughtering the animals in Gaza’s zoo). The head of UNICEF’s filed operations in Gaza describes Israel’s use of “incredibly damaging weapons that tend to slice people…shredding people apart” as family members watch. The 2,200 dead, overwhelmingly non-combatants, included 16 local journalists whose deaths went unreported by their international colleagues. Israel also smashed up infrastructure that had no military significance other than having walls; indiscriminate shelling alternated with precisely targeted bombs and missiles from air, sea and land to destroy 18,000 homes and a third of all Gaza’s mosques. Wafa Hospital had three floors pulverised by tank shells and the tiny Kuwaiti Hospital, another of the 24 medical installations attacked, had to store children’s corpses in ice cream fridges commandeered from local shops.

A real strength of the book is the author’s coverage of Gaza’s resistance fighters, those “dead men on leave” who went up against the US-armed, EU-financed local military superpower. With severely limited options for any kind of armed resistance, Blumenthal describes how Gaza resistance fighters evolved a strategy and tactics to engage enemy soldiers after critically assimilating the lessons learned from that other Arab guerilla force, Hezbollah, who had humiliated the Israeli military in Lebanon in 2006. All Gaza’s fighters, Islamists and leftists from every political faction, even those whose “leaders” were sniping at each other, united operationally against the invaders, although the majority were from Hamas’ armed wing, the Al Qassam Brigades. Fighters killed Israeli soldiers, 66 officially but possibly many more, while five Israeli civilians died during the entire war.

Israel developed a healthy respect for Gaza tunnellers. As someone who was involved in the campaign against the US invasion and devastation of Vietnam in the ‘60s and ‘70s, I later visited the famous Cu Chi tunnels outside Ho Chi Minh City in Vietnam, which allowed the lightly-armed Vietnamese resistance to appear from nowhere, kill US soldiers and destroy hardware before disappearing as mysteriously as they had appeared. (A smiling guide at Cu Chi told us we were virtually standing on a tunnel entrance – identical to the one in the photo - and asked us to try to find it. All our efforts failed dismally.) Tunnels play a similar role for the Gaza resistance, enabling fighters to appear from nowhere and create mayhem among Israeli units. They allow the weaker, popularly based force to carry the battle to a much better equipped invader and sometimes to prevail.

The 2014 “mowing of the lawn” was supported by 95% of Israeli public opinion, with 45% wanting more ferocity from the Israeli army, navy and air force. Ex-nightclub bouncer and Israeli Minister Avigdor Lieberman has declared that “A fourth operation is inevitable”. In a chilling sign of how much of the Israeli electorate is galloping towards openly genocidal politics, Lieberman is insulted by members of Naftali Bennet’s rising Jewish Home Party, now in government, as a “leftist”.

Preparing the Israeli defence in advance, developing Golda Meir’s feigned sadness that she could not forgive the Palestinians for making her kill their children, Minister Bennet charges the Palestinians of today with “self-genocide”. An academic from Bar Ilan University mused on Israeli Radio that resistance might be deterred by raping the sisters and mothers of “terrorists”. The Transportation Minister, Katz, favours a thousand dead Palestinians to prevent one casualty in the occupation army.

It’s worth noting here that Katz’ notion of equivalence, as well as the practice of the Israeli Army, is even more savage that of the Nazi SS during WWII in another part of the Mediterranean. After Italian partisans killed 32 German SS police in Rome in 1944, Hitler initially ordered that 100 Italians be killed for every dead SS man. The SS high command, however, protested that this was totally unreasonable and pushed successully for a reprisal of 10 dead Italians for each SS killed. As a result 335 Italians were massacred by the SS on March 24th 1944 in the Ardeatine Caves.

During Operation Cast Lead in 2008/9, the Israelis operated to Hitler’s specification: just over 1,300 Palestinians killed for a total of 13 dead Israelis. The massacres in 2014 were 2,300 dead Palestinians for 71 dead Israelis, giving a ratio of approximately 33:1, still more than three times the ratio favoured by the SS in wartime Italy.

The barbarism of the Israelis in Gaza has parallels with virtually all European colonial ventures, of which Israel is just one. Walled in by Israel and the Egyptian and other Arab dictatorships and sheikhdoms, facing an enemy armed by the US and EU, the Palestinians are doomed to endless massacre...

…unless we can strengthen the developing world-wide movement of solidarity with Palestine, and work to boycott and isolate the regime of colonisation, apartheid and ethnic cleansing that is planning its next massacre against a heroic, defiant but virtually defenceless population.