On this day in 2010, Muhammad Hatib, a long-serving Palestinian police officer, stabbed and killed Sergeant Major Ihab Khatib, a Druze Arab non-commissioned logistics officer in the elite Kfir Brigade. Hatib told his interrogators subsequently “he was tired of living”, possibly hoping he would be killed as he carried out the attack. Israeli military sources reported that Hatib had waited for a military target on the side of the road beside Tapuah Junction, ignoring Israeli civilians nearby.

The Kfir Brigade are the main perpetrators of crimes against Palestinians.

Hafez Rajabi was marked for life by his encounter [ages 16] with the men of the Israeli army's Kfir Brigade...Sitting beneath the photograph of his late father, the slightly built 21-year-old in jeans and trainers points to the scar above his right eye where he was hit with the magazine 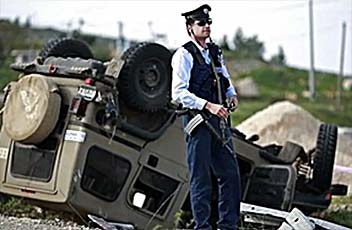 of a soldier's assault rifle after the patrol came for him at his grandmother's house. He says he was dragged 300m to another house by a unit commander who threatened to kill him...started to beat him again, and at one point held a gun to his head. "He was so angry," says Hafez. "I was certain that he was going to kill me."

The young man's story is corroborated by one of the soldiers...published today by the veterans' organisation Breaking the Silence..."We had a commander, never mind his name, who was a bit on the edge," the soldier, a first sergeant, testifies. "He beat the boy to a pulp, really knocked him around. He said: 'Just wait, now we're taking you.' Showed him all kinds of potholes on the way, asked him: 'Want to die? Want to die right here?' and the kid goes: 'No, no...' He was taken into a building under construction. The commander took a stick, broke it on him, boom boom. That commander had no mercy. Anyway the kid could no longer stand on his feet and was already crying. He couldn't take it any more. He cried. The commander shouted: 'Stand up!' Tried to make him stand, but from so much beating he just couldn't. The commander goes: 'Don't put on a show,' and kicks him some more."

Another Kfir Brigade soldier was caught on 2-minute video (right) carrying out a brutal unprovoked attack on Palestinian labourers. Off-duty Kfir Brigade soldier, Michael Gershkovitz was captured on a security camera and indicted a few months after the incident for “wounding and inflicting grievous bodily harm”. He was convicted on 7/7/13. The summary doesn’t say what the sentence was but that he confessed.