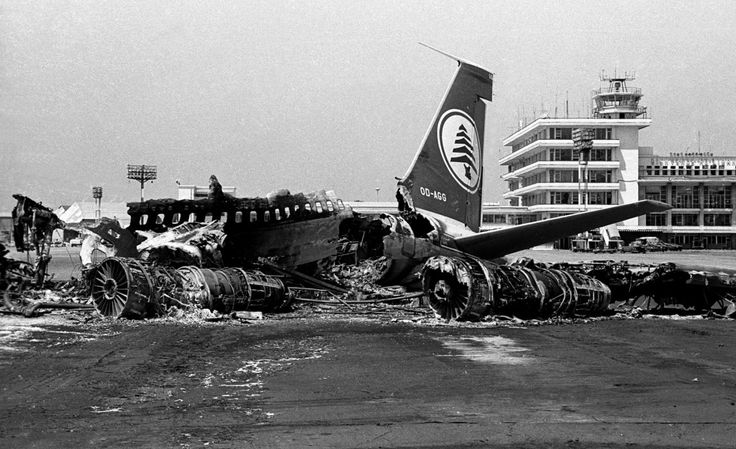 On this day in 1968, Israeli soldiers destroyed 14 passenger aircraft on the tarmac at Beirut Airport. This was the majority of the entire fleets of Middle East Airlines and Lebanese International Airways. Many insurance policies did not cover aircraft losses from acts of war’; as a result, Lebanese International Airways went bankrupt. The USA criticised Israel which had claimed the destruction was in response to a Palestinian guerrilla attack.

Israel claimed the attack was in response to an earlier attack on an Israeli aircraft on the ground in Athens by Palestinian guerillas.

After this attack, airlines from around the world assisted MEA and TMA by offering to lease them aircraft at great discounted rates and even some airlines leased them aircraft for free...Lebanese International Airways liquidated shortly after the commando attack. It's 150 employees and route authority were transfered to MEA.

On the same day as the Israeli attack on Beirut Airport, the US Government "lodged an immediate protest...in strongest terms...to make clear that we simply cannot have this kind of violence in the Near East". The Israeli diplomat was informed that, "if this case should be taken to the Security Council, the GOI will find the US strongly opposing this Israeli action. We will support condemnation".

When the Israeli Government asserted its right to carry out such attacks, the US Government representative insisted the Israeli attack was an "inexcusable retaliatory act striking at innocent people and facilities and also greatly impairing US interests". It would be be "most difficult to defend" Israel's actions.

Who carried the financial costs?