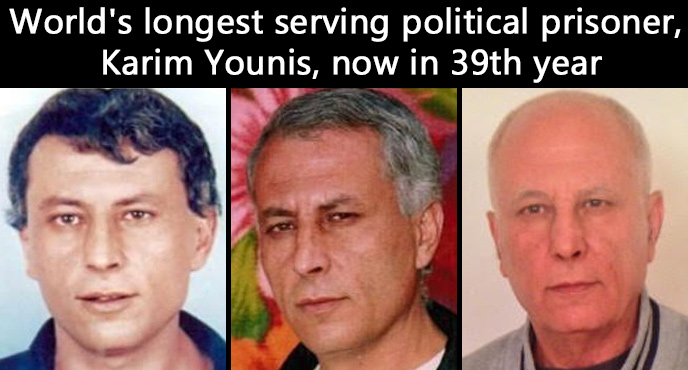 On 6th January 1983, university student Karim Younis, a Palestinian citizen of Israel, seized by Israeli authorities and condemned to 40 years in prison for allegedly carrying out a 1980 attack on an Israeli soldier in the occupied Golan Heights. Younis was a member of the Fatah resistance movement, is now in his 39th year of detention. Nelson Mandela, head of the military wing of the ANC, served 27 years. Karim has published two books, “The political reality in Israel” in 1990 and “The ideological conflict and the settlement” in 1993.

Karim is the longest-serving Palestinian prisoner in an Israeli jail, and is thought to be the longest serving political prisoner on the planet. He was arrested in 1983 for allegedly carrying out an attack on Israeli occupation forces in the Golan Heights, and sentenced to life imprisonment (later reduced to 40 years). He was to be included in a batch of Palestinian prisoners to be released as part of the 2013 peace negotiations mediated by John Kerry; however, Israel ultimately refused to release them, leading to the breakdown of negotiations.

War on Want report on Palestinian political prisoners
Israel holds thousands of Palestinians as political prisoners. Israel’s system of arrest and detention is an integral part of Israel’s apartheid system, under which Palestinians are governed under a separate set of laws than Israelis. It combines human rights abuses against individuals with a system of discrimination specifically designed to restrict and repress the Palestinian people and their struggle for freedom.

The legally-sanctioned torture of a Palestinian detainee during interrogation by officers from Shin Bet, Israel’s Security Agency, further exposes the complicity of Israel’s authorities, including its judiciary, in the systematic violation of the human right to be free from torture.

According to Israeli media reports and Samir’s lawyer, a “judicial body” granted Shin Bet special permission to “use exceptional ways to investigate” in his case, effectively sanctioning the use of methods amounting to torture during his interrogation.

“It is utterly outrageous that the use of torture during interrogations continues to be sanctioned by the Israeli authorities, from the Shin Bet, through the executive branch and all the way to the Supreme Court,” said Saleh Higazi, Amnesty International’s Deputy Middle East and North Africa Director.

“Under international treaties, which legally bind Israel, the use of torture cannot be justified under any circumstances. This case exposes Israel’s claims that its judiciary upholds human rights as a complete sham.”

Palestinian Centre for Human Rights condemned Israeli use of Palestinian prisoners as ‘bargaining chips’
PCHR is gravely concerned at the establishment of an Israeli ministerial committee aimed at intentionally worsening detention conditions for Palestinian security prisoners. PCHR has learned that these measures are intended to exert pressure on the Hamas movement...

A potential measures include reducing the monetary allowances transferred to prisoners by their families to supplement living and dietary conditions(1), restricting means of communication and news sources, reducing family visits and education possibilities, as well as preventing any physical contact between detainees and their families. It is believed that these measures aim to reduce detention conditions to perceived ‘minimal standards’. PCHR contest that prison conditions are currently below international standards, as determined by, inter alia, international human rights law and the United Nations Standard Minimum Rules for the Treatment of Prisoners. Worsened conditions may negatively impact on prisoner’s physical and psychological well-being.