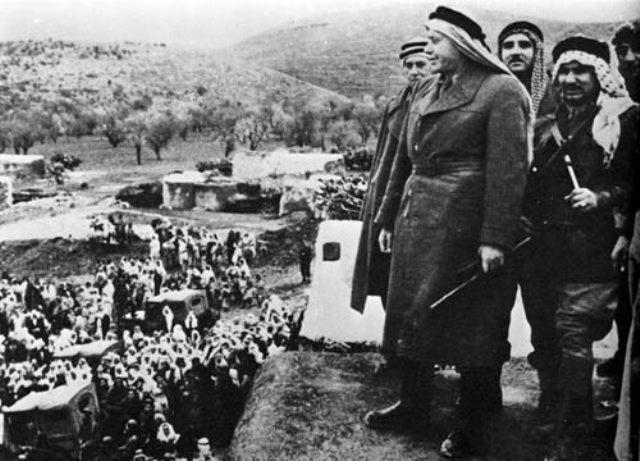 On January 8th 1948, the first contingent of the Arab Liberation Army volunteers arrived in Palestine from Syria, into the area designated by the UN for an Arab state after partition. This took place after Zionist ethnic cleansing was already underway with the creation of about 70,000 Palestinian refugees driven from their homes by Jewish militias. The British High Commissioner Alan Cunningham asked for the British Army to threaten Syria with military action to stop the ALA deployment.

With Zionist ethnic cleansing operations against Palestinian communities under way, "the High Commissioner, Alan Cunningham, opposed the deployment of Arab Legion troops into the territory and threatened the Arab states with RAF intervention if they grouped their forces around the border or crossed it". (Gelber, Palestine 1948, p115)

"Eager to test...British vigilance in the face of their actions, the Hagana’s High Command, as part of the Consultancy, decided to ransack a whole village and massacre a large number of its inhabitants. At the time the British authorities were still responsible for maintaining law and order and were very much present in Palestine. The village the High Command selected was Balad al-Shaykh, the burial place of Shaykh Izz al-Din al-Qassam, one of Palestine’s most revered and charismatic leaders of the 1930s, who was killed by the British in 1935. His grave is one of the few remains of this village, about ten kilometres east of Haifa, still extant today.
For the Zionist ethnic cleansing of December 1947 see The Ethnic Cleansing of Palestine, Ilan Pappe pp 55-6. The example of the massacre and ethnic cleansing of Balad Al Shaykh is on p 59

"A local commander, Haim Avinoam, was ordered to ‘encircle the village, kill the largest possible number of men, damage property, but refrain from attacking women and children.’  The attack took place on 31 December and lasted three hours. It left over sixty Palestinians dead, not all of them men. But note the distinction still made here between men and women: in their next meeting, the Consultancy decided that such a separation was an unnecessary complication for future operations. At the same time as the attack on Balad al-Shaykh, the Hagana units in Haifa tested the ground with a more drastic action: they went into one of the city’s Arab neigbourhoods, Wadi Rushmiyya, expelled its people and blew up its houses. This act could be regarded as the official beginning of the ethnic cleansing operation in urban Palestine. The British looked the other way while these atrocities were being committed."

From Palestine Remembered on Balad Al-Shaykh
"More than 60 villagers were massacred by the Haganah on the 31st of December 1947 (New Year's Eve Massacre) [in a] military assault by Jewish troops. Mostly the village has survived destruction. Many of the houses and shops are still standing and are occupied by Jewish settlers. The cemetery is visible and it's in a state of neglect. Late 1999, the cemetery and the grave of 'Izz al-Din al-Qassam were desecrated.

Partial ethnical cleansing took place soon after the New Year's Eve massacre and on 24 April 1948, the rest of the inhabitants were ethnically cleansed and bused out by British troops."

"According to the History of the Haganah, a force of 170 men from the Palmach were ordered to 'encircle the village, harm the largest possible number of men, damage property, and refrain from attacking women and children.' Nevertheless, there were also women and children among the 60 people left dead. Several dozen houses were also destroyed during the attack. The massacre was meant to be in retaliation for the killing of Jewish oil refinery workers the previous day, allegedly by Palestinian coworkers from the village, an action which had itself been provoked by a bombing by the Irgun at the gates of the Haifa oil refinery in which 6 Palestinian workers were killed and another 42 wounded - according to the Palestinian newspaper Filastin. The paper reported that a bomb was thrown from a speeding car while they were standing in an employment line outside the refinery. Ironically, the Haganah had labeled the attack 'irresponsible' [Benny Morris].

2-minute video: Zionism meant ethnic cleansing before 1948, before 1947, since its inception.