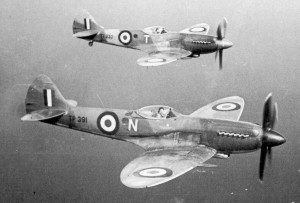 On this day in 1949, according to Hansard, “four RAF Spitfires...on reconnaissance inside the Egyptian Frontier, were attacked by Jewish fighters and the four Spitfires failed to return from the mission…” Israel suspected the British of sharing reconnaissance data with the Egyptian forces. Israeli historian Tom Segev says that Ezer Weizman, one of the pilots and a future President, went out to kill somebody out of "pure mischief" because it was the day of a UN-imposed cease-fire and he was missing out on the glory.

According to Tom Segev in 1949: The First Israelis:

"...the war with the Arab states ended with two air battles in which five British planes were shot down; one British pilot was killed and two were taken prisoner. Israel claimed that the British planes had penetrated its airspace and were shot down over its territory, but that was untrue. Ben-Gurion copied into his diary the cable he received from the south stating that Allon had ordered the remains of the planes towed out of Egyptian territory and scattered over Israeli territory “for obvious reasons.”
"...The attack on the British planes was essentially an act of mischief by a few trigger-happy pilots. Ezer Weizmann, who flew one of those planes, later wrote in his memoirs that he did it because he was “blue” about having missed out on the glory of that day. “Here the war was over,” he wrote, “here it was breathing its last breath . . . and I was left out of the celebration,” so out he went to seek his prey."

Before killing British pilots out of 'mischief', future-President Weizman joined a terrorist cell in London that was plotting to kill prominent UK figures.

Weizman had been trained by the RAF and served in parts of the Empire - Rhodesia, India and Egypt - during the second world war. In postwar London he joined an underground cell of Menachem Begin's Irgun group which plotted to assassinate General Evelyn Barker, British military commander in Palestine.

The CID uncovered the plot and identified the members of the cell: "The plot was nipped in the bud by Scotland Yard, who gently advised the young conspirator that it was time he went home." The British authorities gentle treatment of Weizman and his fellow would be assassins allowed him to shoot down RAF pilots three years later "for mischief".

London was busy in those post-war years with Zionist assassination plots against wartime Prime Minister Churchill and post-war Labour Foreign Secretary Ernest Bevin among others.

2-minute video: Queen and British political elite let Weizman and Israel know that all is forgiven

In 1997 Queen Elizabeth paid tribute to Weizman's role as a former Second World War RAF fighter pilot, avoiding any mention of his use of the skills learned during that time to shoot down British aircraft over Egypt. Her Majest also praised his quest for Middle East peace during a glittering state banquet at Buckingham Palace attended by leading members of Britain's Jewish Community and prominent figures from British political life. Unusually, none of the guests made reference to Weizman's time spent in London in 1945.

Weizman was forced out of office in 2000 after seven years as President of Israel for accepting hundreds of thousands of pounds from two French businessmen.