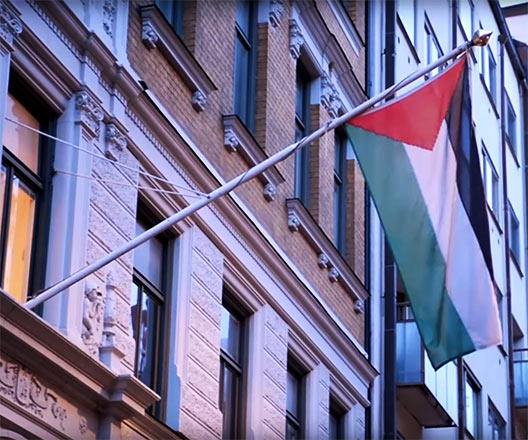 On January 10th, 2015, the first “Embassy of the State of Palestine” in Western Europe opened in Stockholm. Palestinian President Mahmoud Abbas and Swedish Foreign Minister Margot Wallstrom attended the inauguration ceremony. Israel summoned Sweden’s ambassador to protest. The US said it was “premature”. Seven EU members in Eastern Europe took the same step earlier, including three of the four members of the right-wing Visegrad Group, generally seen as Israel allies within the EU.

While recognizing the “State of Palestine” excites and pleases many who support the Palestinian cause, people should not get carried away with the aesthetics of “statehood” in what would amount to a bantustan.

Instead, they should focus on the negative consequences for the right of return and the rights of Palestinian citizens of Israel. The main purpose of the so-called two-state solution is not to restore Palestinian rights, but rather to preserve and recognize Israel’s so-called “right to exist as a Jewish state.”

Sweden led the way among European countries in opposing apartheid in South Africa. That included rejecting the regime’s bantustans which were designed to preserve apartheid by disguising it as “independence” for Blacks. It is also past time for Sweden and other countries to stop concealing their complicity with Israeli apartheid behind the so-called “two-state solution” and to openly support full rights and equality for all Palestinians throughout historic Palestine.

UK maintained its position not to support recognition of State of Palestine. Three of of the militantly pro-Israel Visegrad Group recognising the "State of Palestine" should raise questions as to the real meaning of such "recognition".

Israel is politically closest inside the EU to the right-wing Visegrad Group, generally seen as Islamophobic governments:
A year and a half after Prime Minister Benjamin Netanyahu participated in the summit meeting of the Visegrad nations – Hungary, Czech Republic, Poland and Slovakia – in Budapest, Israel was set to host the follow up meeting of the group on February 18 and 19 in Jerusalem. Hardly surprising since the Visegrad Group had "aligned themselves with Israeli viewpoints on issues such as migration, security, and threat perceptions, all of which are disputed in the EU".

The summit was later cancelled after Israel and Poland fell out over interpretations of the Nazi Holocaust, a dispute that has subsequently deepened. Netanyahu is keen to assert collective Polish national guilt (where Zionist ideology excludes Jews from the Polish nation). The right-wing Polish regime is equally keen to deny the hard core anti-semitism of the Polish nationalist right even before the Nazis marched in. It is equally determined to cover up the historic record of Polish workers - Jews and Gentiles - in combatting Polish anti-semitic parties:

Although there is a common misconception that anti-Semitism was endemic to all classes in Polish society, the evidence shows that anti-Semitism was primarily a middle-class and, to a much lesser extent, a peasant phenomenon. The bulk of the Polish working class followed the PPS, and they understood from the beginning that the Bund’s fight was their fight and their aid to the beleaguered Jews was, as in the retaliation against the Naras, vital. In 1936 the Zionist paper, Palestine Post, admitted reluctantly to its readers that whenever the Fascist student gangs would swarm out of their sanctuaries in the universities to start a pogrom:

"the non-Jewish Polish workers and students speedily come to the aid of the Jews. Recently the Polish Socialist Party [PPS] has arranged a number of huge propaganda meetings ... very stirring addresses were heard from non-Jewish Poles who seemed pathetically eager to disassociate themselves from the “Endek” rowdyism."