On this day in 2008, Lloyds TSB announced the withdrawal of banking facilities from Interpal, a UK-based charity supporting the Palestinians. A protest campaign spread from Scotland across the UK. Lloyds TSB then asked for a meeting with SPSC representatives in Glasgow where they said they “had no choice” since the US had designated Interpal as a terrorist organisation. The campaign continued to spread until the Bank of England engineered a solution whereby Interpal continued to have access to banking services.

In late 2008 Lloyds TSB announced the withdrawal of banking facilities from Interpal, a UK-based charity supporting the Palestinians under occupation. Zionists applauded, none objected. 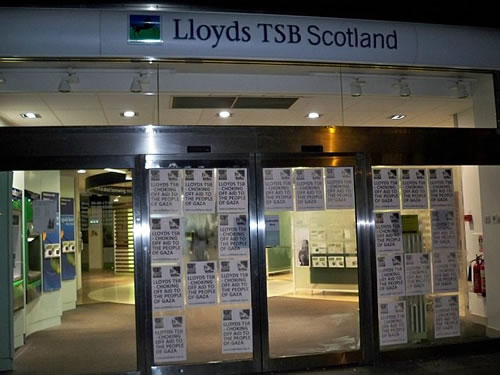 SPSC launched a campaign that spread from Scotland to Newcastle, Bristol and beyond. Lloyds TSB asked for a meeting with SPSC representatives in Glasgow, where they told us they “had no choice” due to US anti-terrorism legislation. We responded that our pledges to Palestinians meant we also “had no choice” but to continue and escalate the protests. The campaign continued to spread until a solution was reached involving the Bank of England whereby Interpal continued to have access to banking services."

Lloyds TSB wrote to Scottish PSC smearing Interpal after withdrawing banking facilities to the charity whose main work is to provide humanitarian aid to the people of Gaza. Lloyds claimed Interpal was linked with global terrorism.

Businessman hands back excellence award after bank froze Palestinian charity's accountsImraan Ladak, chairman of Kettering Town FC and 77th on the young person's Sunday Times Rich List, won an Asian Jewel award from Lloyds in 2007 for excellence in business. But after Lloyds' moved earlier this month to shut down Interpal's account, Ladak said:

"Lloyds TSB's plans can result only in escalating the horrific suffering of innocent children, supported by those with racially motivated agendas. I no longer trust that Lloyds TSB follows the equal opportunities and anti-racist principles the Asian Jewel awards are based upon."

Lloyds is one of the four clearing banks through which all UK banks must work. Last month it ordered the Islamic Bank of Britain to freeze Palestinian aid charity Interpal's account for an indefinite period, without any explanation.

Lloyds TSB was forced to close branches during protests...feeling the anger from ordinary people across the UK disgusted by Israeli massacres in Gaza and by Lloyds TSB complicity in the blockade and siege of Gaza. Protests spread from Edinburgh and Glasgow to places such as Brighton, Bristol, Bath, Newcastle.

Fresh 2020 threats to close down Interpal by closing its UK banking facilities
In the latest blow to Interpal, British bank HSBC has told its customers in the UK that it will no longer process standing-order donations to the charity from later this month, without offering any explanation why.

The threat to Interpal posed by such actions is serious enough that auditors noted in the charity's latest accounts that the withdrawal of card processing services by credit card companies in 2018 and the potential loss of access to banking facilities were “key material uncertainties that may affect [Interpal's] ability to continue as a going concern”.

Yet on the ground in Gaza, Interpal is considered one of the main organisations helping to address the needs of a two-million strong population within which more than half live in poverty and a majority are dependent on humanitarian assistance.

Interpal, which celebrated 25 years of operations in 2020, provides social welfare, health services, educational and employment opportunities for many people in Gaza, as well as contributing to vital infrastructure projects.

mick 23 hours ago 9 June
Jan 2022The Israeli veterans of the 1948 battle at Tantura village finally come clean about the mass killing of Arabs ...
Alan B 3 days ago 12 September
The UK Labour Party has hired a former Israeli Unit 8200 spy to help manage its social media, The Electronic ...
Declan B 8 days ago 10 January
Monday 10 January 2021 Elbit Systems UK announced that it had sold Ferranti Technologies’ Power and Control business (Ferranti P&C), ...
Mick Napier 16 days ago 31 July
More than 130,000 children, aged between three and 14, were sent to Commonwealth countries, working class children sent into slavery ...
Tommy T 17 days ago 29 January
JTA — At least 90,000 descendants of Sephardic Jews have become citizens of Portugal or Spain since 2015, when those ...