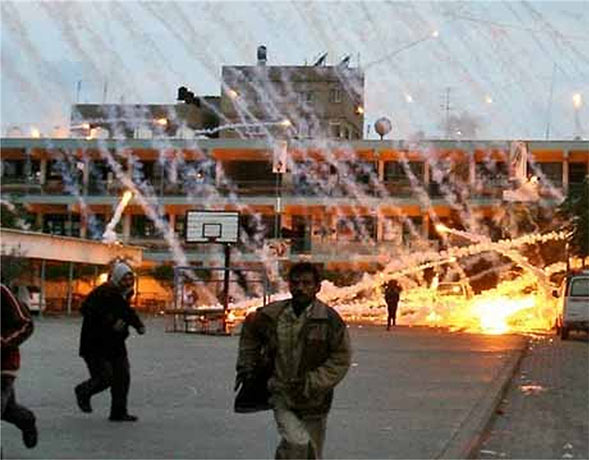 On 15 January 2009, Israel followed repeated warnings from UN staff with artillery fire with white phosphorus shells into a UN compound in Gaza. According to Human Rights Watch, Israel's military fired white phosphorus over crowded built-up areas of Gaza repeatedly and indiscriminately, killing and injuring civilians and committing war crimes. Initially dismissing the claims as “baseless”, the Israelis then accepted the report and lightly censured two officers for “exceeding their authority”.

Israel accused of indiscriminate phosphorus use in Gaza

“The Israeli military fired white phosphorus repeatedly over densely populated areas, even when its troops weren't in the area. Civilians needlessly suffered and died." After Human Rights Watch called on the UN secretary-general, Ban Ki-moon, to launch an international commission of inquiry, the Israeli military at first denied using the weapon, then insisted that “the IDF's use of smoke shells was in accordance with international law. These shells were used…in accord with international humanitarian law. The claim that smoke shells were used indiscriminately, or to threaten the civilian population, is baseless."

The Guardian found one such shell still smoking several days after it was fired, outside the home of the Abu Halima family in Atatra. One white phosphorous shell hit the house directly, killing a father and four of his children. His wife was severely burnt.

Human Rights Watch found 24 spent white phosphorus shells in Gaza, all from the same batch made in a US ammunition factory in 1989 by Thiokol Aerospace. Other shells were photographed during the war with markings showing they were made in the Pine Bluff Arsenal, also in America, in 1991.

HRW said it found no evidence that Hamas fighters used Palestinian civilians as human shields - a key Israeli claim - in the area at the time of the attacks it researched. Witnesses described how a white phosphorus shell hit a car in Tel al-Hawa, in south-eastern Gaza City, killing a bank manager, his wife and two of their children on 15 January.

On the same day, at about 7.30am, Israeli artillery shells began falling near the main compound of the UN Relief and Works Agency in Gaza City, where 700 civilians were sheltering. UN staff made repeated telephone calls to the Israeli military asking them to stop but, at about 10am, six shells hit the compound, three of which contained white phosphorus. The warehouse was hit, causing at least $10m of damage, and it continued to burn for 12 days.

Faced with mounting irrefutable evidence, Israel changed tack and, most unusually, acknowledged use of white-phosphorus shells in built up areas of Gaza. Two senior officers were reprimanded for failing to follow their own rules of engagement. Israel had always insisted that white phosphorous was not used to shell civilians in Gaza.

The officers will not face criminal prosecution. reported the BBC:

"That is something the Israeli political-military establishment is desperate to avoid. They fear it would be disastrous for morale and would damage the ability of Israel's army to fight the next war. However, Israel's problem is that if its own investigations appear to the outside world to be a whitewash, the UN is all the more likely to order a special tribunal at The Hague."

Israel repeatedly attacks UN facilities, e.g. Qana, Lebanon in 1996 and came back again for a repeat Qana massacre in 2006. A later, 2014 Gaza school attack was denounced as 'criminal act' by UN chief

Israel repeatedly shows its contempt for the UN, as it did on July 26 1982 in Beirut when shelling began precisely at 2:42 and 3:38pm, "a touch of humor with a slight hint", Israeli daily Davaar reported, noting that the timing, referring to UN Resolutions 242 and 338, "was not accidental". (Chomsky, Fateful Triangle, p.420)