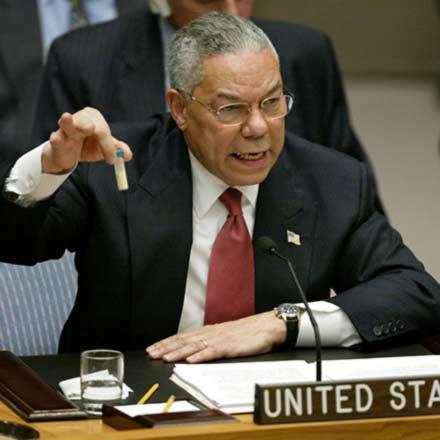 On 16 January 2006, hundreds protested US Secretary of State Colin Powell speaking for the Jewish National Fund at its annual Glasgow Hilton fund-raiser. The JNF openly discriminates against non-Jews and is a pillar of Israeli residential apartheid, controlling over 90% of the land surface of Israel and banning Palestinian citizens of Israel from buying or leasing any of that land. The Scottish JNF ended its public fundraisers at the Glasgow Hilton after the Israeli 2009 massacre of Operation Cast Lead. 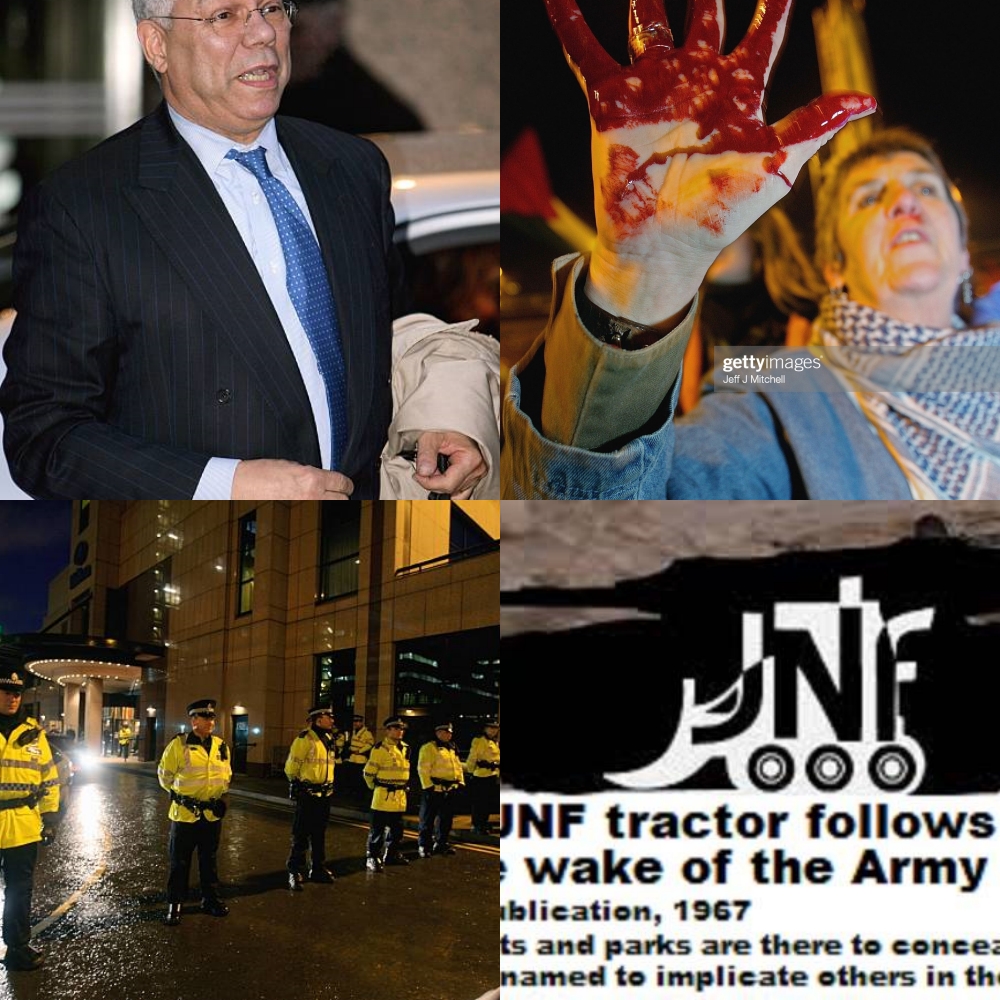 A protestor, with fake blood on her hand, stands outside the Hilton Hotel where former U.S. Secretary of State Colin Powell is speaking January 16,2006 in Glasgow, Scotland. Powell spoke at the Jewish National Fund charity event as a guest speaker.

Every Glasgow Hilton fundraiser had been met with vigorous protests since the 2001 event with Bill Clinton whose effigy was burned outside. The BBC reported the hundreds of Clinton protestors as "dozens" but went on:

"Mr Clinton said he would talk "a little about current events" during his speech at the £125-a-head  dinner. His insights included, the BBC reported: "I am quite confident that we are going to prevail in this conflict in Afghanistan..."

"Scottish Trades Unions Congress (STUC) General Secretary Bill Speirs said that although the JNF did support "agricultural projects" it remained involved in questionable activities. He said: "The difficulty is that they do much more than that and they are engaged in exercises that are extremely undermining to any possibility of a peace process."

"He said the JNF had built roads to connect Jewish settlements in disputed territories around Israel and said the group's website refers to "strong links" with Israeli defence forces.

The JNF’s role in the ethnic cleansing of Palestine and the maintenance of an apartheid residential system has always been supported by great violence against its victims. The murder of two Palestinian children by Israeli snipers, caught on camera few weeks ago, is an example. The link between the JNF and Israeli war crimes was highlighted by the visit of Tzipi Livni last month (May 2014) to address a JNF event in London. Livni was shielded from the possibility of arrest for war crimes by the UK Government’s grant to her of a temporary diplomatic status. The JNF is an important part of the Zionist matrix of organisations.

They are, nonetheless, worried. In the wake of their losing David Cameron and failing to get Miliband or Clegg as Honorary Patrons, a Westminster parliamentary motion condemning the JNF’s activities, EDM 1677, attracted an unprecedented 70 MPs’ endorsement (two MPs signed a related statement). Worryingly for the JNF, their counter-attack failed to dislodge a single one of the MPs who signed EDM 1677.

Determined opposition to the JNF can defeat this racist organisation. A vigorous protest greeted the JNF’s London hosting of Livni on Nakba Day, May 15th. In Scotland, where grassroots opposition has been ongoing over the last two decades, the determined protests that accompanied every public JNF event led to their cancelling their previously regular fundraisers, from glitzy Glasgow Hilton events with speakers like Bill Clinton and Colin Powell to pro-am golf tournaments sponsored by Lexus. A fundraiser for the racist JNF was held in the Glasgow Hilton in February 2015 but was only publicised after the event. 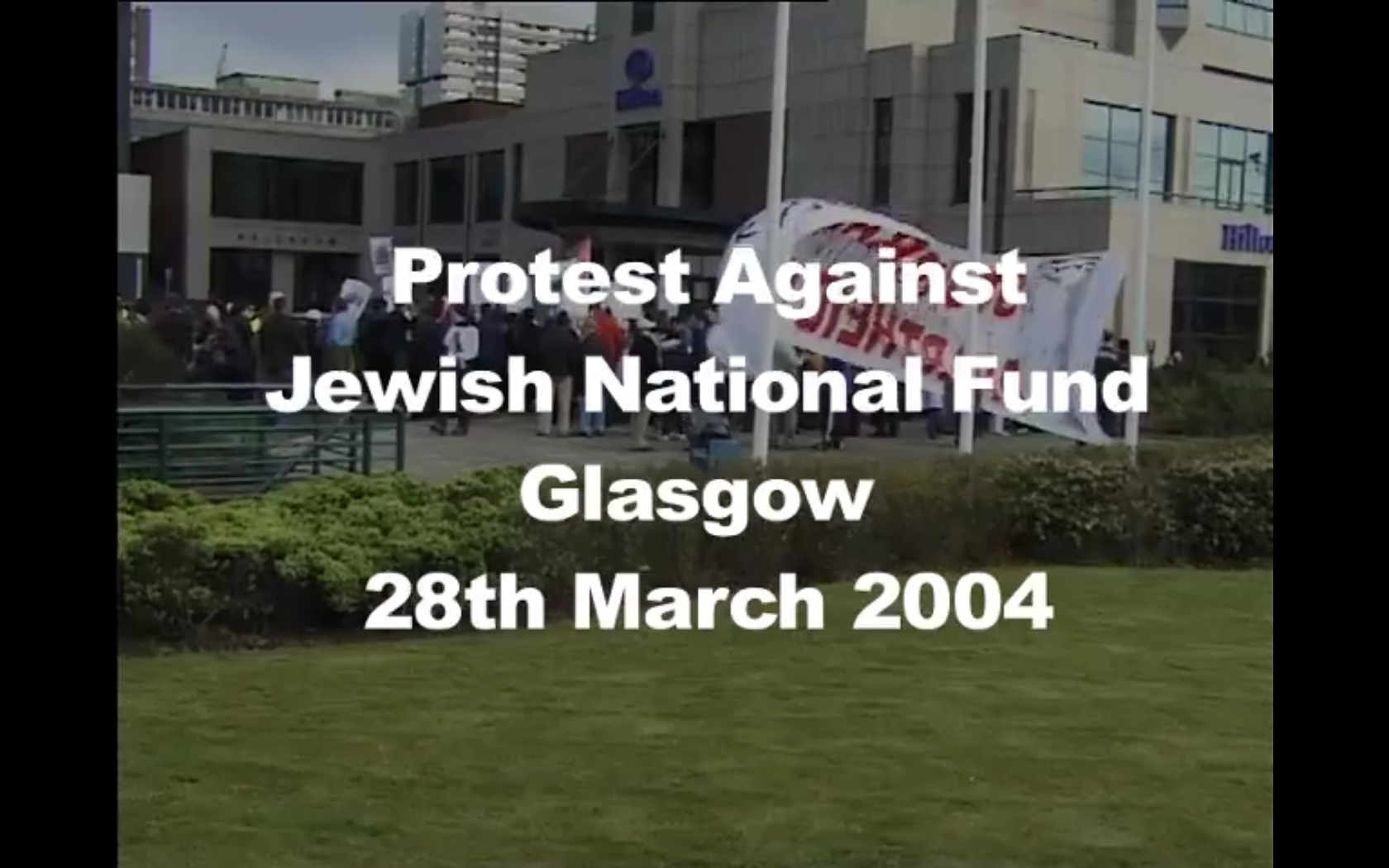