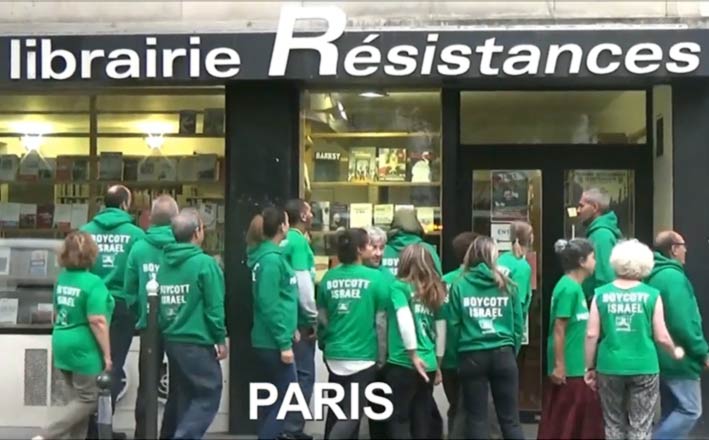 On January 17th 2016, French Prime Minister Manuel Valls said “French authorities must change their attitude” towards demonstrations that call for a boycott of Israeli products, which he accused of fostering a “nauseating climate”. He condemned a protest in Paris, staged by the Boycott, Divestment and Sanctions (BDS) movement against the Israeli colonisation of Palestinian land. Vals claimed “It is obvious we have shifted from criticism of Israel to anti-Zionism and from anti-Zionism to anti-Semitism.”

France’s prime minister has criticised boycotts of Israeli products, saying they fuel anti-Semitic sentiment. But critics say using France's strict laws against "inciting discrimination" to criminalise the boycotts violates free speech. Manuel Valls said “French authorities must change their attitude” towards demonstrations that call for a boycott of Israeli products, which he accused of fostering a “nauseating climate” in the country.

...and suffered a serious defeat when the European Court of Human Rights ruled for the democratic right to BDS

PARIS (Reuters) - The European Human Rights Court (EHCR) ruled on Thursday that a French criminal conviction against activists involved in a campaign to boycott products imported from Israel had no sufficient grounds and violated their freedom of expression...The EHCR said there was little scope in European conventions for restrictions on political speech and that its very nature was to be controversial and virulent as long as it did not cross the line and call for violence, hatred or intolerance.

Pressure is mounting on France to ban a far-right Jewish group, described as violent and extreme by critics, following its involvement in clashes at a pro-Palestinian protest in Paris and the jailing of two of its supporters over a bomb plot. The Jewish Defence League, an international organisation dedicated to protecting Jews from anti-Semitism by “whatever means necessary”, has a long history of controversy and alleged acts of terrorism and has been outlawed in both the US and Israel.

Two French Jewish Defence League supporters had been sentenced to prison in June for targeting the car of a Jewish man with a homemade bomb, prompting the victim’s lawyer to also demand the banning of the group... A bomb made from a plastic bottle exploded near a car belonging to Jonathan Moadab, co-founder of the blog "Cercle des Volontaires (Circle of Volunteers)", though it failed to cause any damage.

Earlier that year, Moadab’s blog had attacked the “French Zionist nebula” in one of its articles, AFP reported. Moadab also reported receiving anonymous phone calls threatening to “kill you, your mother, your father and your brothers". Moadab’s lawyer, Dominique Cochain, accused the LDJ of not wanting to hear “Jewish voices diverging from unconditional support for Israeli policy”.

Vanessa Paradis cancels Tel Aviv show in response to requests from BDS activists. The activists who called for the artist to boycott the Israeli performance were charged with racism offences.

Israeli American film maker Udi Aloni explained why he appeared as a defence witness in the trial in Paris of EuroPalestine's Olivia Zemor for her involvement in the appeal to Vanesa Paradis .