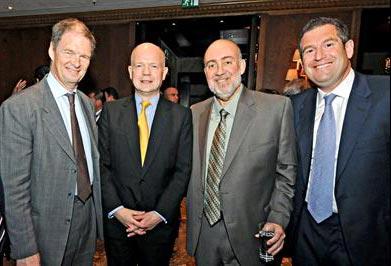 AMBASSADOR WARNS OF DANGER FROM POPULAR ANGER AT ISRAEL
On this day in 2011, Israeli Ambassador Prosor wrote that his earlier opinion that Britain “had become a hotbed of anti-Israeli sentiment” was outdated since “That position has deteriorated.“ Prosor compared Britain to a high-rise building where relations in the “luxurious penthouse suite” are excellent but every other floor is hostile. “Without repairs to the lower levels, there could be serious damage.” The Ambassador is right - an inflamed public opinion has the potential to produce a crisis in state-to-state relations.

"Anti-Israeli sentiment could threaten our close co-operation in fighting Islamic extremism...I am proud to represent a country that, like this one, is grounded in democratic values, tolerance and freedom of expression...Three years ago, I wrote in The Daily Telegraph that Britain had become a hotbed of anti-Israeli sentiment. That position has deteriorated. Attitudes once considered marginal or extreme have drifted dangerously close to the mainstream.

"On British campuses, a minority of aggressive, radicalised and even violent students have hijacked the discourse from the majority. Hard-line Arab and Muslim speakers are hosted with impunity. This country fought the Second World War for the right for ideas to be freely aired and debated. Today, some British campuses are breeding grounds for a mindset that seeks not to engage in debate, but to shut it down...

"Tomorrow's leaders are being educated in environments where visceral hatred of Israel is not the exception but the norm. NGOs such as Amnesty are happy to host speakers with dubious records of sympathy for militant groups. In Scotland, West Dunbartonshire Council recently ordered a ban on books by Israeli authors, putting the "dumb" into Dumbarton. A place that bans books is not far from one that burns them. [An Israeli hasbara invention - see Scottish Council firm against demented Zionist hysteria]

"A campaign is raging to drive a wedge between Israel and our natural allies. Extremists who despise democracy are abusing Britain's institutions to demonise Israel, the Middle East's only democracy, out of the accepted family of nations. Ironically, the abuse of British tolerance has made it the Western headquarters of the assault on Israel's legitimacy."In many ways, the friendship between Britain and Israel is in reasonable health. In strategic dialogue, counter-terrorism and co-ordinating a response to the Iranian nuclear threat, we are working together as never before. On a governmental level, relations remain warm. But bubbling below the surface, a toxic mix of delegitimisation and demonisation against the State of Israel risks undermining the relationship.

"Our co-operation has never been more important. In a world facing the threat of Islamist extremism, we are natural allies in the fight for democratic values. As citizens in the Arab world rise up for freedom, it is crucial we prevent democratic movements being hijacked and snuffed out by Islamist fanatics, as occurred in Iran in 179. "Britain has led the international community in the struggle against Iran's nuclear weapons programme. Nothing would cripple progress in the region more than a mullah regime with a nuclear bomb, providing an umbrella for terrorism while holding the world's energy supply hostage. It is essential we continue to work together to prevent that devastating scenario.

"If the current level of demonisation of Israel remains unchecked, however, our room for co-operation could be narrowed. Our relations are like a luxurious penthouse suite, all mod-cons and stunning views, perched on top of a dilapidated apartment block. The foundations are shaky, water floods the basement and rising damp stains the building. Without repairs to the lower levels, there could be serious damage...Full Israeli manifesto here