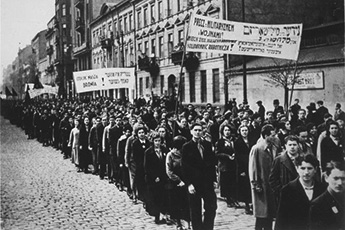 THE INSPIRATIONAL JEWISH MASS MOVEMENT - THE BUND
On 18 December 1938, in the local elections held in several Polish cities the anti-Zionist, socialist Bund won the elections for 17 of the 20 council seats that were allocated to Jews. Zionists achieved one seat. European Jews resisted the pull of Zionism until they were destroyed with tens of millions of others in the Nazi Holocaust. In the last Polish municipal elections in December 1938 and January 1939 before the start of the Second World War, the anti-Zionist Bund received the largest segment of the Jewish vote.

Israel suppresses the memory of this Jewish mass movement
It is only too understandable that institutional Zionism has stubbornly stifled the memory of this movement; that the schoolbooks of Israeli children are silent about the Bund and the commitment of Jewish fighters on the side of the Spanish republic; that in Israel, Yiddishland is buried in museums, and the Yiddish language in libraries; that the witnesses and actors who live in Israel are never called on to recount their struggles, but are even blamed for their history. In actual fact, the traces of this movement indicate sufficiently that the triumph of Zionism did not flow from the implacable ‘logic’ of history, some kind of ontological necessity, but was rather the product and avatar of the most irrational phase of our time.
Revolutionary Yiddishland: A History of Jewish Radicalism by Alain Brossat, Sylvie Klingber

The socialist tradition, including the Bund, condemned Zionism both for its solution to anti-Semitism and for its colonization of the Arabs. In 1910, the Jewish socialist Karl Kautsky defined Zionism as a "sport for philanthropists and men of letters" who wanted to make Palestine "a world ghetto for the isolation of the Jewish race." Later Kautsky expanded, "It is labor that gives people a right to the land in which it lives, thus Judaism can advance no claim on Palestine. On the basis of the right of labor and of democratic self-determination, today Palestine does not belong to the Jews of Vienna, London, or New York, who claim it for Judaism, but to the Arabs of the same country, the great majority of the population."

It is not hard to see why many Jews were hostile to Zionism. Zionism called for a retreat from the struggle against anti-Semitism. But the socialist movement argued that the fight against anti-Semitism was central to the revolutionary struggle against capitalism. Thus on the one side stood the revolutionaries who organized Jews and non-Jews together to fight the pogroms, lead strikes, and overthrow the Tsarist regime that perpetuated Jewish oppression. On the other side stood the Zionists who collaborated with the Tsar and his butchers, stood aside from the struggles for self-defense, and sabotaged work in the unions. It was the revolutionary workers movement – and not Zionism – that offered a genuine hope for liberation for European Jews.

Jews largely rejected Zionism when this political movement was started by a group of irreligious Eastern European Jews over a hundred years ago. Reasons for this rejection varied. Most prominent spiritual leaders saw in Zionism a radical departure from Jewish tradition and objected to the political appropriation by the Zionists of spiritual concepts such as “Jerusalem”, “Zion” or “Land of Israel”. Thus, Rabbi Isaac Breuer wrote in 1918: “Zionism is the most terrible enemy that has ever arisen to the Jewish nation…Zionism kills the nation and then elevates the corpse to the throne”. Another rabbi declared as early as 1905 that “Zionism is a purely nationalist-racist movement without the least commonality with religion”.
Jewish Rejection of Zionism by Yakov M Rabkin

Bund supporter Marek Edelman was deputy commander of the historic Warsaw ghetto uprising of the Jews against the Nazis in 1943: in his 80s in 2002, Edelman wrote a letter to Palestinian leaders. Though the letter criticised the suicide bombers, its tone infuriated the Israeli government and its press. He wrote in a spirit of solidarity from a fellow resistance fighter, as a former leader of a Jewish uprising not dissimilar in desperation to the Palestinian uprising in the occupied territories. He addressed his letter to "commanders of the Palestinian military, paramilitary and partisan operations - to all the soldiers of the Palestinian fighting organisations".

Di Shvue - The Vow
The anthem of the Yiddish Bund, performed by the Workmen's Circle chorus, as a tribute to its last and most valiant partisan. Marek Edelman (1919 - 2009) was the youngest leader of the Warsaw Ghetto Uprising and one of its few surviving leaders. He remained in Poland for the rest of his long life. In his last years he spoke out in solidarity with the Palestinians, seeing the parallels between the Warsaw Ghetto and the Gaza Strip all too clearly.

Brothers and sisters of work and need,
All who are scattered like far-flung seed -
Together! Together! The flag is high,
Straining with anger, red with blood,
So swear together to live or die!

Earth with its heaven hears.
Bear witness, bright stars,
To our vow of blood and tears.
We swear. We swear. We swear.
We swear to strive for freedom and right
Against the tyrant and his knave,
To best the forces of the night,
Or fall in battle, proud and brave.
So swear together to live or die!

We swear our stalwart hate persists,
Of those who rob and kill the poor:
The Tsar, the masters, capitalists.
Our vengeance will be swift and sure.
So swear together to live or die!

To wage the holy war we vow,
Until right triumphs over wrong.
No Midas, master, noble now -
The humble equal to the strong.
So swear together to live or die!

To the Bund, our hope and faith,
we swear Devotedly to set men free.
Its flag, bright scarlet, waves up there,
Sustaining us in loyalty.
So swear together to live or die!