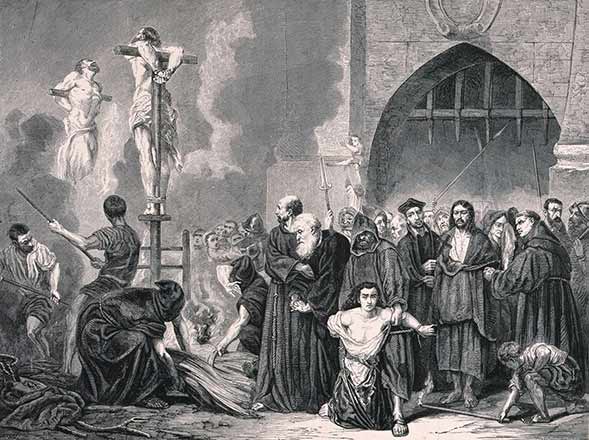 On this day in 2015, Portugal approved a law, shortly followed by Spain, offering citizenship to Sephardic Jews, descendants of those who once lived there. The Catholic Inquisition in the Christian kingdoms initially forced non-Christians to convert before expelling all Muslims and Jews from the Iberian Peninsula in 1492 and the years following. Muslims who can similarly show descent from those expelled in 1492 need not apply. Israel still denies entry to Palestinians it expelled in 1948, 1967 or subsequently.

'I'm a Palestinian refugee. I just became a Spanish citizen thanks to my Jewish roots'
My grandfather was a Palestinian refugee who fled Jaffa during the war of 1948 and arrived in Lebanon the same year. He married my grandmother, a Lebanese woman, and they had a number of children together, including my father. But Palestinian refugees and their families do not have the same rights as Lebanese citizens; they cannot own property or take certain jobs....until this year, I only had a travel document that states I am a Palestinian refugee from Lebanon.
Full story of Heba Nabil Iskandarani

BBC's human interest coverage feels no need to compare Jews "returning" to Iberia after more than four centuries with the refusal of a self-claimed 'Jewish State' in Israel-Palestine to allow the return of Palestinian refugees after seven decades.

The President of the Jewish community in Lisbon told the BBC: “I call it a law of return, allowing Jews to get back a passport that they normally would be holding if their ancestors had not been forced to leave. It’s the closing of a circle of reconciliation between the Jews and Portugal.”

The largest group of applicants for the Portuguese and Spanish passports are from Israel - 17% of Israelis have a second passport and 56% would like to acquire one. 27% of Israelis polled wanted a passport "because they were worried about the long term future of the State of Israel."

"More than 132,000 Jews have applied for Spanish citizenship since the government offered residence to relatives of those expelled during the Inquisition more than 500 years ago. Figures from Spain’s justice ministry show that by the end of August, one month before the September 30 deadline, 117 British Jews had applied for Spanish citizenship under the scheme introduced in 2015.

Meanwhile in Austria last month the parliament ratified a law extending citizenship to descendants of Nazi victims who fled during and after Hitler's Third Reich.

1-minute video: Israeli TV welcomes Spain "making amends" for cruel expulsion of Iberian Jews in 1492 but sees no need for Israel to make amends for the murderous expulsion of Palestinians from Palestine in 1948, 1967 and subsequently.

mick 23 hours ago 9 June
Jan 2022The Israeli veterans of the 1948 battle at Tantura village finally come clean about the mass killing of Arabs ...
Alan B 3 days ago 12 September
The UK Labour Party has hired a former Israeli Unit 8200 spy to help manage its social media, The Electronic ...
Declan B 8 days ago 10 January
Monday 10 January 2021 Elbit Systems UK announced that it had sold Ferranti Technologies’ Power and Control business (Ferranti P&C), ...
Mick Napier 16 days ago 31 July
More than 130,000 children, aged between three and 14, were sent to Commonwealth countries, working class children sent into slavery ...
Tommy T 17 days ago 29 January
JTA — At least 90,000 descendants of Sephardic Jews have become citizens of Portugal or Spain since 2015, when those ...