On this day in 1956, Israel Border Police slaughtered 48 Palestinian men, women and children returning from field work in the village of Kafr Qasm during a curfew they had not been told of. After news leaked out, the killers were convicted, sentenced to prison terms, pardoned and released within a year. The commander was fined ten cents. Samia Halaby reports a survivor in her book, Drawing the Kafr Qasem Massacre. "An Israeli officer told soldiers to line up the Palestinians, then said 'Harvest them!'"

The full story
The massacre took place on the eve of the Suez crisis — in which Israel invaded Egypt with the backing of France and Britain. It followed the announcement of a curfew by Israel in the middle of that day.

Although most Palestinians who were outside their villages were doing agricultural work in the fields and had no way of knowing about the curfew, Israeli border police were ordered by the military to shoot anyone who returned after 5pm. Many Israeli officers did not comply. Yet in Kafr Qassem, the order was carried out. Forty-eight men, women and children were slain — 23 of the victims were children between eight and 17 years old. One of those killed was a pregnant woman.

“You won’t find any mention of the massacre in any Israeli schoolbook sealed by the ministry of education,” Lina Badr, a 19-year-old from Kafr Qassem, said in an interview with The Electronic Intifada.

“So Arab schools around the country make sure to dedicate the week before the anniversary each year for educational events, school trips to the [Kafr Qassem massacre] museum, and distributing literature about the full story of what happened during the massacre.

“Plus, each year for over half a century we hold a huge demonstration on 29 October to make sure it is clear: there will be no forgetting.”
Read more

Message of Massacre Lives On for Palestinians by Jonathan Cook 30 Oct 2008
In a conflict that has produced more than its share of suffering and tragedy, the name of Kafr Qassem lives on in infamy more than half a century after Israeli police gunned down 47 Palestinian civilians, including women and children, in the village.

...Local media revisited the events, publishing testimonies from two former senior police officers who recalled the order from their commander to shoot all civilians breaking a last-minute curfew imposed on the village, which lies just inside Israel's borders.

The two men, who were stationed at villages close to Kafr Qassem, suggested that, had they not personally disobeyed the order when confronted with Palestinians returning from work, the death toll would have been far higher.

Taking part in the annual march was one of the few survivors of the massacre.  Saleh Khalil Issa is today 71, but back in 1956 he was an 18-year-old agricultural worker. He remembered returning to the village on his bicycle, along with a dozen other workers, just after 5pm on 29 October 1956. What he and the other villagers did not know was that earlier that day the Border Police, a special paramilitary unit that operates inside both Israel and the occupied territories, had agreed to set up checkpoints unannounced at the entrance to half a dozen Palestinian villages inside Israel...

According to Israeli historian Tom Segev, it later emerged that the decision to seal off the villages was one element of a contingency plan to expel the inhabitants to Jordan under cover of the war.  Mr. Arabi pointed out that the entrances to Kafr Qassem were shut on three sides, leaving open only an exit to the West Bank...

Israeli media reported at the time that the policemen involved "all received a 50 per cent increase in their salaries" and that they were treated in the courtroom "as heroes."

When a trial was held, the commander, Col Shadmi, was found guilty of making an "administrative error" and fined a penny.  Although his men received lengthy prison terms, they were pardoned and released after a short time. Several went on to distinguished careers in public service, including Lieutenant Gavriel Dahan, who carried out the executions in Kafr Qassem.  He was later appointed head of Arab affairs in the mixed town of Ramle.

Mr. Issa, who was called to testify, said: "The trial was a farce.  It was a game, to make it look as though they were dealing with the matter seriously."  He was later awarded 700 lire compensation, less than a year's wage...

Two surviving former Border Police officers who were part of a team charged with enforcing the curfew admitted that a Major Malinki had urged them to shoot civilians at the briefing. Nimrod Lampert, now aged 74 but then a 22-year-old lieutenant posted at Kafr Bara, recalled that Malinki thought "it would be desirable to have a few people killed in each village. . . .  It was also clear to me that Malinki's order was effectively to murder people in cold blood." When faced with villagers arriving after the 5pm curfew, Lampert ignored his instructions and told his men to spare them...

Lampert was not alone in refusing the order. Binyamin Kol, now 77, was 25 in 1956 and the senior officer assigned to the village of Jaljulya. A refugee from Nazi Germany, he had experienced Kristallnacht in 1938 when Nazi troops conducted a pogrom against the local Jewish population.  He was saved when a Nazi policeman warned him: "Run home fast, boy." Remembering that moment 18 years later as Arab workers arrived at his checkpoint, he said: "I fired in the air and shouted in Arabic -- 'Yallah, go home fast' -- just like the German policeman who warned me on Kristallnacht"...

Analyzing the transcripts of the trial, Mr. Segev has noted that the reason why many of the policemen followed a "manifestly unlawful" order was because of a general racism in Israeli society: "They hated Arabs."

The threat of expulsion continues to haunt the inhabitants of Kafr Qassem and its neighboring villages.  It is the main platform of Avigdor Lieberman, a politician who was appointed deputy prime minister at one point in Ehud Olmert's government.

Mr. Arabi observed that the massacre at Kafr Qassem had changed Palestinians' response to Israeli violence.  "In the 1948 war, many people fled when faced with the Israeli army, expecting to return after the fighting.  After Kafr Qassem, Palestinians learnt  that Israel did not play by the rules of war.  We learnt that sumud was our only defence.

'Yiska' Shadmi, the highest IDF officer tried for the Kafr Qasem massacre, admitted before his death that his trial was staged to protect military and political elites. Historian Adam Raz believes that behind the horrific 1956 event was a secret plan to transfer Israel's Arabs.

Samia Halaby is a renowned artist whose work is collected by the British Museum, the Guggenheim and other galleries around the world. Drawing the Kafr Qasem Massacre powerfully tells the story of this atrocious Israeli massacre of 49 Palestinian labourers. Based on interviews with survivors, Samia Halaby created a set of documentary drawings on the subject. The emotions of anger and fear leap from every page of this book, enabling the reader to bear witness to the terrible suffering endured by the inhabitants of this small Palestinian village.

One of the killers later told an Israeli paper: "We were like the Germans. They stopped trucks, took the Jews off and shot them. What we did is the same. We were obeying orders like a German soldier during the war, when he was ordered to slaughter Jews." The workers said shalom to the officer, who then asked them "Are you happy?" The workers answered "Yes". The police descended from their vehicles and ordered the workers to stand; the officer then gave orders to his men, saying: "Harvest them". (Testimony of survivor Abdullah Ismeer Bdier) 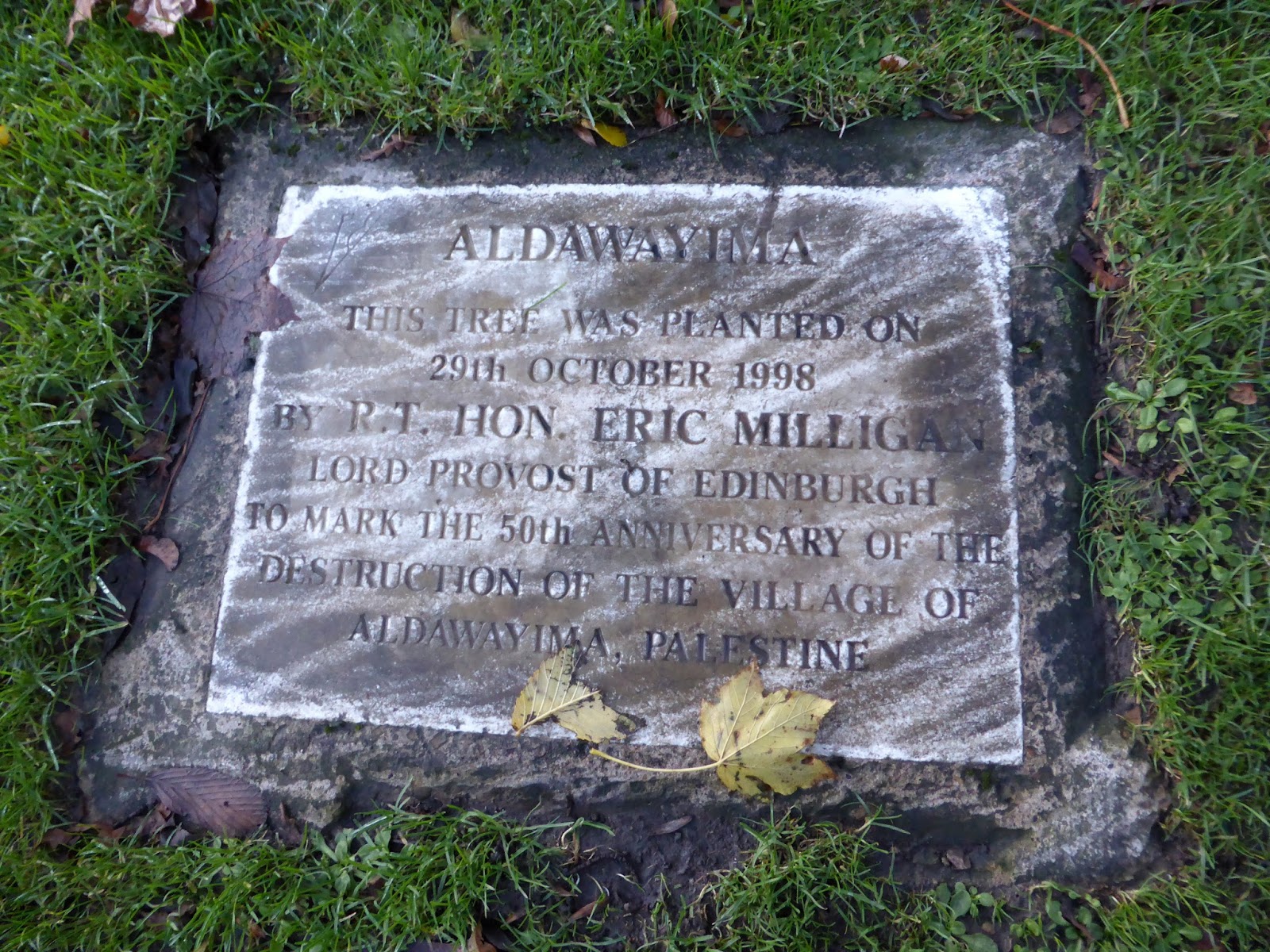 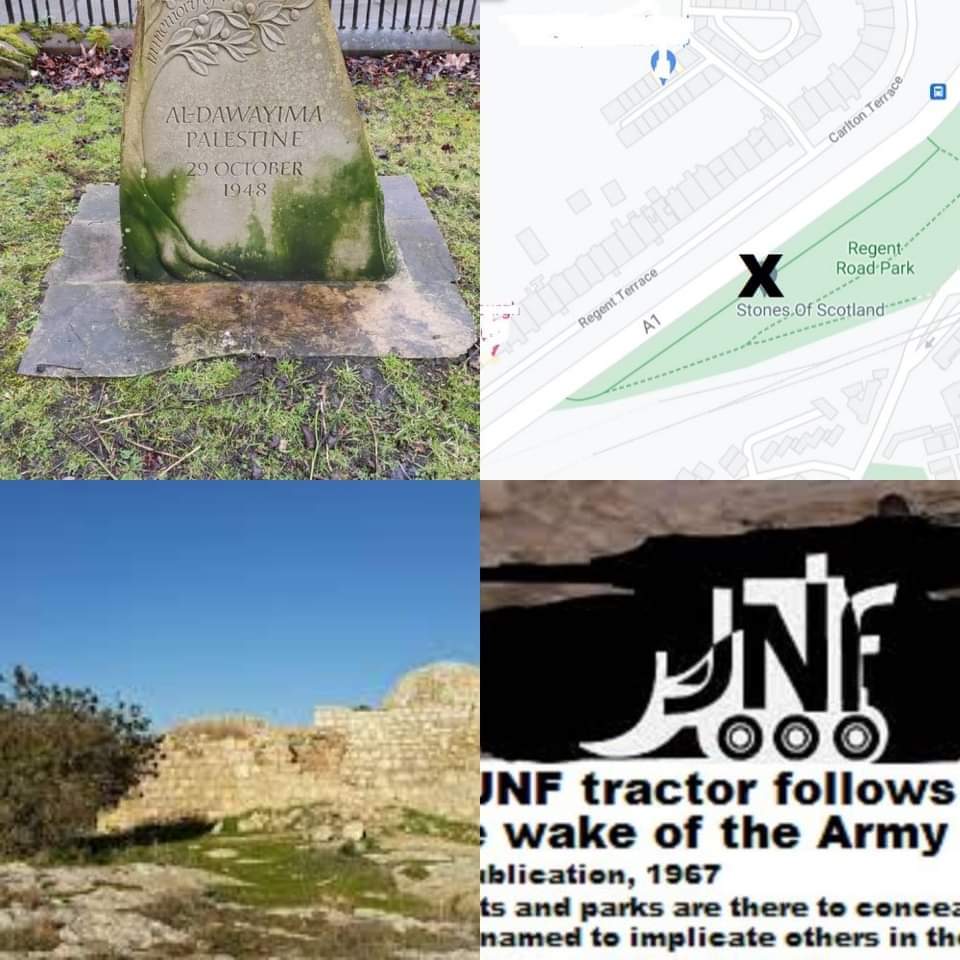 ...in 1948 Al-Dawaymeh a village near Hebron. Zionist troops carried out a huge massacre of men, women and children. Palestine Remembered cites over 100 victims but other sources suggests many times that number. Two commemorative plaques in the Scottish capital officially commemorate this atrocity, one near the Meadows and one on Regent Road