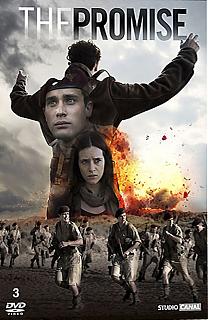 ZIONIST ONSLAUGHT ON TV DRAMA MASTERPIECE FAILS
On this day in 2011, pro-Israel columnist Howard Jacobson “could only laugh in derision at the ludicrous, brainwashed prejudices” of Peter Kosminsky’s 4-part series The Promise. The Israeli Embassy condemned the “worst example of anti-Israel propaganda” ever seen on television. Scores of malicious complaints to Ofcom from the usual suspects were unanimously rejected. The Promise generated numerous rave reviews on its first screening and won Best Drama of 2010/11 at the One World Media Awards.

"The Promise is probably the thing that in 30 years in television I am most proud of", said multiple award-winning director Peter Kosminsky. Peter Kosminsky and his team extensively researched for seven years.
Although the story it tells is fictional it is inspired by the testimony of many British soldiers, Israelis and Palestinians who recalled the Mandate period and life in Israel/Palestine today.

The team  researched the stories of over 70 former servicemen who had served in Palestine...Peter found most of the British soldiers he spoke to started with immense sympathy for the idea of a homeland for Jews but were much disillusioned by the end of their time in Palestine.

The Promise is an epic series that astonished with its forthright and honest treatment of Palestine both in the final years of the British mandate and now. As a bold and uncompromising piece of TV scheduling by Channel 4, it was outstanding.
It is an accurate and honest TV presentation of Israeli crimes past and present that outraged pro-Israel lobby groups. There was fresh intense pressure on television regulators in the UK and France to take action. France’s Canal + was forced to make concessions by running an announcement prior to each episode to state it is fiction.

What makes The Promise both a gripping drama and an exquisitely revealing story is the clever device of setting a naive young girl on a quest to retrace the footsteps of her dying grandfather, a British soldier in Mandate Palestine. As she delves into his diary of 1946-48, the story of the soldier’s misfortunes unfolds, and the girl loses her innocence as she is forced to brutally confront the reality of Israel past and present.

The pro-Israel Jewish Chronicle lamented the censorship effort by Israel lobby members had been unsuccessful.

Ofcom has rejected scores of complaints about the impartiality and inaccuracy of the TV series The Promise, and defended it as a "serious television drama, not presented as a historical re-creation". The broadcasting regulator received 44 complaints about the four-part drama, written and produced by Peter Kosminsky and aired earlier this year by Channel 4. But Ofcom concluded in a 10-page report that the series did not breach its code of conduct.

Viewers [the pro-Israel Brigade] complained that the drama, about British Mandate Palestine and its legacy, was antisemitic, used upsetting footage of concentration camps, incited racial hatred, was biased against Israel and presented historical inaccuracies.

But Ofcom said: "Just because some individual Jewish and Israeli characters were portrayed in a negative light does not mean the programme was, or was intended to be, antisemitic.

11-minute video: Kosminsky engaging at 9m25s in with audience and dealing with a few pompous pro-Israel trolls
https://youtu.be/l4UtQ6OabfU