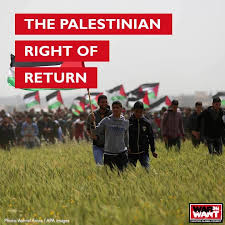 ISRAEL ADMITTED TO THE UN WITH KEY PROVISO
On this day in 1949, the UN General Assembly voted 37-12, with 9 abstentions, to admit Israel to the UN. Israel was admitted on condition that it accept the Right of Return of Palestinian refugees. The resolution admitting Israel requires Israel to comply with General Assembly Resolution 194, which states that “refugees wishing to return to their homes and live at peace with their neighbours should be permitted to do so at the earliest practicable date”. Israel agreed to comply with Resolution 194.

Israel’s admission as a member to the UN was made conditional on its implementation of resolution 194, which it has disregarded on the basis that, according to the Israeli government, compliance would undermine the Jewish character of Israel.

Eight months after a Jewish gang assassinated the United Nations Mediator in Palestine, Count Folke Bernadotte, Israel was admitted to the United Nations. Yitzhak Shamir, who would later be elected Prime Minister of Israel, ordered the assassination. Resolution 194 included the Security Council opinion that "Israel is a peace-loving State and is able and willing to carry out the obligations contained in the Charter".

As Israel acceded to conventions, its legal obligations towards Palestinian refugees under international law grew stronger.  The International Convention on Civil and Political Rights (ICCPR) affirms that “no one shall be arbitrarily deprived of their right to enter his own country” (Article 12), the International Convention on the Elimination of All Forms of Racial Discriminations (CERD) requires State parties to “to prohibit and to eliminate racial discrimination…and guarantee the rights of everyone…in particular [to] the right to leave any country, including one’s own and to return to one’s country ”(Article 5).  Furthermore, Article 1D of the Refugee Convention applies solely to Palestinian refugees and designates special protection and assistance from two separate international agencies: United Nations Conciliation Commission on Palestine (UNCCP) and UNRWA, with an agreed-upon durable solution embodied in Resolution 194.

It is illegal as a matter of international law to deny refugees of a particular race, color, national or ethnic origin the right to return to their homes. Yet,  subsequent Israeli laws barred Palestinian refugees from returning to their homes in what is now Israel and the occupied Palestinian territories (Law of Return), sanctioned mass denationalization laws targeting Palestinian refugees (Nationality Law), and confiscated Palestinian private property and land-holdings (Absentee Property Law and Land Acquisition Law).  While the Right of Return remains the primary remedy, Palestinian refugees are entitled to reparations of their homes and properties based on the UN Principles and Guidelines, ICCPR Article 2, and other instruments. Reparations entail  restitution (including right to return), compensation, rehabilitation, satisfaction of victims, and guarantee of non-repetition.

Despite the continuing inaction of the international community, the Right of Return remains an inalienable and binding universal right, which applies equally to the Palestinian people, and should not be contingent on politics. It is an individual and a collective right intrinsically linked to the exercise of the right to self-determination of all 13 million Palestinians world-wide, and it is one which is currently not being respected. Until it is, the Palestinian people must be protected from further displacement and expulsion.