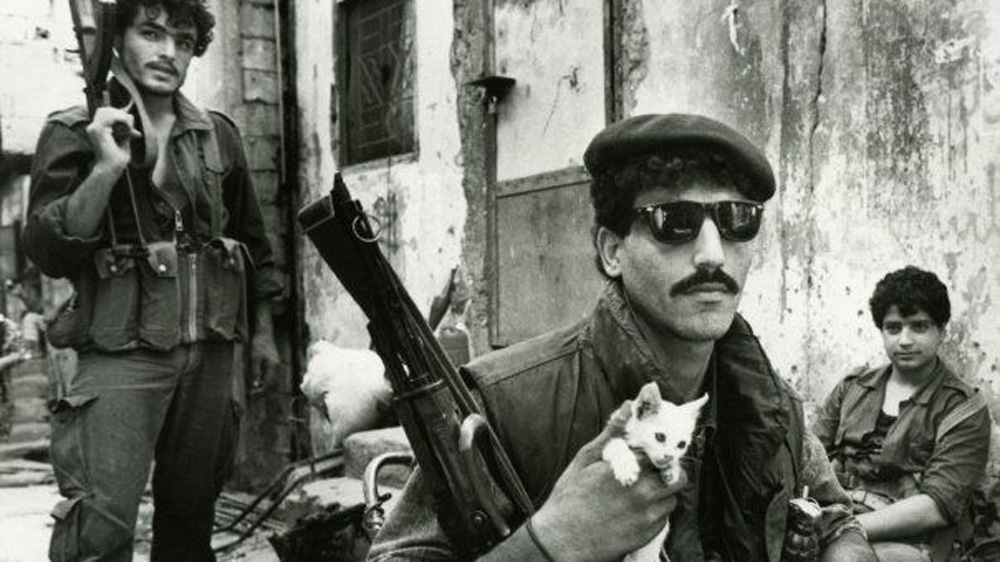 On this day in 1985, three years after Israel's allies carried out the massacre in Sabra and Shatilla, the Lebanese Amal Movement attacked Palestinian militias to wrest control of the refugee camps of Sabra and Shatila and Burj el-Barajneh in Beirut. The Amal Movement was heavily backed by Syria and indirectly supported by Israel. Virtually all the houses in the Palestinian refugee camps were reduced to rubble. The Palestinians were greatly outnumbered. Fighting continued intermittently. In April 1987 Amal finally lifted the siege and handed over its positions to the Syrian Army.

Red Cross workers finally are able to go into the sprawling refugee camp of Burj al-Barajneh to carry out the dead and wounded Palestinians following a month of heavy shelling from surrounding Amal militia and Lebanese army troops. Privation and suffering here and in the nearby camps of Sabra and Shatila have been extreme. “For every bucket of water,” says a survivor, Fatima Makkieh, “there were two buckets of blood.” ‘Abd ul-Latif Daib, another survivor, cries, “All there is above our heads now is fear.” In Burj al-Barajneh and nearby Shatila, Palestinian fighters still hold out, but the smaller camp of Sabra has been completely overrun and demolished.

Elie Hobeika, the 27-year-old Israeli-trained Phalangist commander who directed the Sabra/Shatila massacre of September 1982, is now president of the executive committee of the rightwing Lebanese Forces militia, superceding chief-of-staff Samir Geagea. In March, Geagea’s troops fiercely shelled Palestinian camps and Muslim neighborhoods in Sidon and then withdrew. This, and the vengeful rampage of Palestinians and Lebanese into Christian villages in April, displaced tens of thousands, with hundreds of casualties on all sides. As Israeli troops withdraw to their “security zone” on the Lebanese side of the border, the communal homogenization of southern Lebanon seems practically irreversible. Where Geagea had scorned any Lebanese entente under Syrian tutelage, Hobeika proclaimed it time to “return to the Arab fold” and dismissed his alliance with Israel as “a passing cloud.”

Amal has said it is determined to stop the guerrillas from re-establishing their structure in Lebanon; the network was destroyed by the Israeli invasion in 1982. The militia has said it fears that Israel will retaliate against Shiites in southern Lebanon if the Palestinians re-establish a significant military presence in the country...

A total of 30,000 [mainly Palestinians] live in the three camps. The defenders are believed to number about 1,000, including teen-age boys and girls.

At a news conference Thursday in the Jordanian capital of Amman, Yasir Arafat, the PLO chairman, said the Amal leader, Nabih Berri, had struck a secret deal with Israel whereby the Shiite militia would obstruct Palestinian and Lebanese guerrilla activity against Israel from southern Lebanon."

There were many atrocities by the Syrian-backed Amal militia, and cold-blooded killings of Palestinian captives. The quality of the Palestinian resistance was captured in the remark reported by the UK Sunday Times of one weary Amal fighter trying to occupy the camps: “Everytime we relax, a guy jumps out of a drain, throws a grenade and disappears.”

On this day in 2021, police called for fire service support to remove Palestine Action protestors from the roof of the Elbit-owned UAV Tactical Systems factory in Leicester. However, Union Officials immediately reminded Senior Managers that "as firefighters, we are, and remain, a proud humanitarian service and our role does not involve law enforcement." Once the safety of those involved had been confirmed, Fire Brigades Union members withdrew from the incident. Leicestershire Brigade Chair, Graham Vaux added that “the Fire Brigades Union stand in support of Palestinian solidarity and the right to protest.”