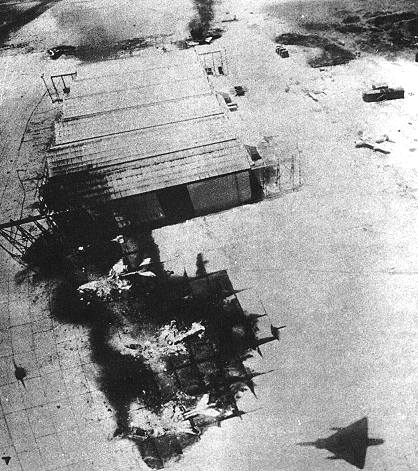 On this day in 1967, Israel finalised preparations for a surprise attack on Egypt, Jordan and Syria. Menachem Begin, a member of the government at the time and later Prime Minister, told a newspaper: "In June l967, we had a choice. The Egyptian Army concentrations in the Sinai approaches do not prove that Nasser was really about to attack us. We must be honest with ourselves. We decided to attack him." Israel used the victory to expel around 300,000 Palestinians from their homes, over 100,000 for the second time.

Fifty years ago, between June 5 and June 10, 1967, Israel invaded and occupied East Jerusalem, the West Bank, the Gaza Strip, and the Golan Heights. The Six-Day War, as it would later be dubbed, saw the Jewish David inflict a humiliating defeat on the Arab Goliath, personified perhaps by Gamal Abdel Nasser’s Egypt.“The existence of the Israeli state hung by a thread,” the country’s prime minister, Levi Eshkol, claimed two days after the war was over, “but the hopes of the Arab leaders to annihilate Israel were dashed.” Genocide, went the argument, had been prevented; another Holocaust of the Jews averted.There is, however, a problem with this argument: It is complete fiction, a self-serving fantasy constructed after the event to justify a war of aggression and conquest. Don’t take my word for it: “The thesis according to which the danger of genocide hung over us in June 1967, and according to which Israel was fighting for her very physical survival, was nothing but a bluff which was born and bred after the war,” declared Gen. Matituahu Peled, chief of logistical command during the war and one of 12 members of Israel’s General Staff. (March 1972)

1967 - another wave of ethnic cleansing
By the end of the war, Israel had expelled another 300,000 Palestinians from their homes, including 130,000 who were displaced...after the 1948 war. Thousands of Palestinian refugees tried to cross the border searching for relatives, attempting to return to their homes and to recover their lost possessions. Between 1949 to 1956, it is estimated that Israeli forces shot dead between 2,000 to 5,000 people who tried to cross.

“Perhaps if we don’t give them enough water..."
Israeli Prime Minister Eshkol and his cabinet later floated a covert ethnic cleansing policy by “working on the establishment of a unit or office that will engage in encouraging Arab emigration.” The prime minister added:
“We should deal with this issue quietly, calmly and covertly, and we should work on finding a way from them to emigrate to other countries and not just over the Jordan [River]...Perhaps if we don’t give them enough water they won’t have a choice, because the orchards will yellow and wither...Perhaps we can expect another war and then this problem will be solved. But that’s a type of ‘luxury,’ an unexpected solution.”