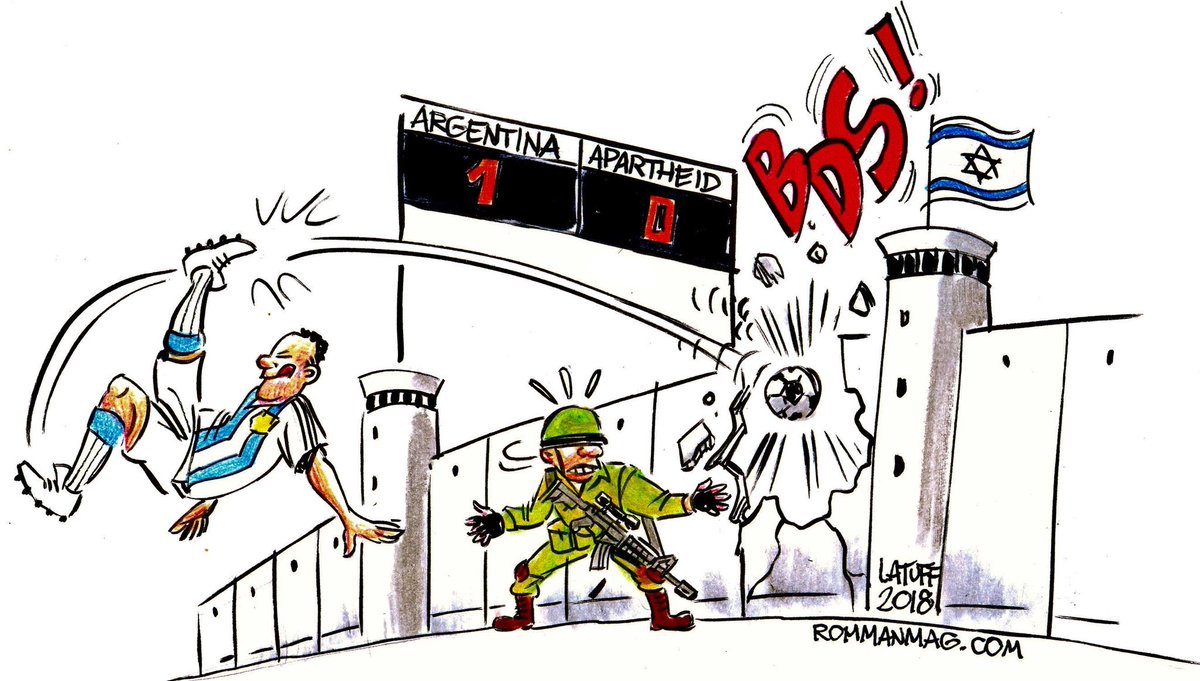 y in 2018, Israeli fans were “stunned” when the Argentine national football team cancelled their game with Israel due four days later. The game had been highly anticipated in Israel with tickets selling out in 20 minutes. Netanyahu pleaded in vain with Buenos Aires, then blamed unspecified “terrorism” from “anti-Semitic elements” for forcing the cancellation. Palestinians were elated. The team’s decision followed an international campaign across South America to urge Argentina not to go to Israel.

"Beyond the disappointment of tens of thousands of Israeli soccer fans...Israelis want to portray their country as a thriving democracy like any other — violence on the border and the occupation notwithstanding — and a full member of the family of nations. And they appreciate when other countries treat them that way...signs of normalization are manna for Israelis,

Argentina cancels Israel soccer friendly following Palestinian pressure
The game, Argentina’s final warm up match before the World Cup in Russia, which begins next week, was highly anticipated in Israel with tickets selling out in 20 minutes. It wasn't "Palestinian pressure" that scored this BDS goal but pressure from across civil society across Argentina and South America.

The Israeli Government put out a story about terrorism and threats of violence, for which the Times of Israel sees evidence in BDS protestors in Barcelona waving blood-stained shirts ouitside the players' hotel! "Protesters outside the team’s practice facility in Barcelona also waved Argentine soccer jerseys covered in fake blood — leaving it up to observers to decide whether the blood was meant to symbolize Palestinians who died or soccer players who might." Culture and Sport Minister Miri Regev — the driving force behind staging the game in Jerusalem — accused “terror groups and BDS” of being behind the cancellation: "The true story here is the threats on Messi’s life."

Underlining the power of boycott as seen from Israeli ruling circles, "Prime Minister Benjamin Netanyahu called Argentinian President Mauricio Macri to urge him to intercede with the Argentinian authorities to try and forestall the cancellation."  To no avail.

Netanyahu's claim that “anti-Semitic elements” forced the cancellation is an invention; in fact Israel's Long History of Cooperation With Ruthless, anti-Semitic Dictators in Argentina and across South America  is well documented.

Anti-semitic Argentine butchers worked closely with Israel. Videla reserved special treatment for Jews, and among those kidnapped and the 30,000 murdered there were approximately 1,300 Jews, significantly higher than their share of the population. They also received special treatment in terms of torture...This antisemitic ruler secured the fervent cooperation of the Israeli government. In late 1977 the Ambassador to Buenos Aires, Ram Nirgad, declared that "since the military junta came to power there has been an improvement in the relations between Israel and Argentina". Following the US arms embargo, 30 per cent Israeli arms exports in those days went to Argentina, to the tune of $2 billion. In June 1981 there were 118 Argentine officers in Israel. A letter sent by the Israeli Embassy said that there is "no country in the world in which so many Argentine officers were staying simultaneously for the purposes of weapons procurement, training, etc.''

SPSC's Mick Napier interviews an activist from BDS Argentina on the campaign that succeeded in getting that game cancelled.

David Comedi of IJAN (International Jewish Anti-Zionist Network) tells how Palestinians changed his views when he emigrated to Israel, how he moved to non-Zionism and then active anti-Zionism. He gives a blow by blow how the significant BDS victory was achieved through hard work, smarts, luck and international coordination via the Palestinian BNC to other BDS campaigns elsewhere.  And how a small number of supporters in Barcelona played a key role!