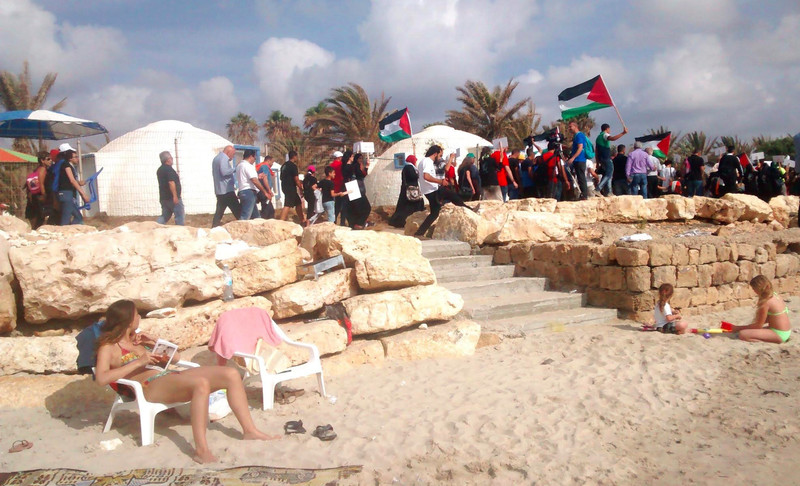 IS IN ORDER"
On this day in 1948, Israeli Army files for the Alexandroni Brigade recorded the aftermath of their massacre of villagers in the Palestinian village of Tantoura (pop. 1,500) : "We have tended to the mass grave, and everything is in order” (IDF Files 57/4663/1949)  About 35 kilometers south of Haifa, Tantoura is one of the 64 Palestinian coastal villages on the road between Tel Aviv and Haifa, of which only two remain today, spared because men from these villages had traditionally worked in the nearby Jewish settlements, which pressed to have them spared so they could continue to benefit from the cheap labour.

“All of the men of Tantura [in Israel] were taken to the cemetery of the village, and they put them in lines, and they ordered them to begin digging, and every line that finished digging just was shot and fell down to the holes. Which I guess reminds at least a few of you, something that had to do with Germans, three years after the end of 2nd World War.”
Teddy Katz, lecture, Olean, NY, April 14th 2005.

As late as April 2020, pro-Israel groups were still denying that any post-battle executions had taken place at Tantoura.

...the single worst massacre committed by the Israeli army during the 1948 war that established a Jewish state on the ruins of the Palestinians’ homeland.

For Palestinians, Tantura, the name of a coastal village south of Haifa that was once home to 1,700 inhabitants, has become a byword for the darkest episodes of the Nakba (Arabic for catastrophe), the ethnic cleansing of 1948.

For Israelis, the site is referred to by a different name — Dor, known as a popular beach resort belonging to two neighboring kibbutzim, Dor and Nahsholim, an hour’s drive north of Tel Aviv.

In May, some 300 activists met in the resort’s car park in an attempt to end the long-enforced silence about Tantura in Israelis’ collective memory. Precisely 67 years after the massacre, they staged the first-ever commemoration at the site.

11-minute video: Teddy Katz, a Haifa University graduate student, interviewed over 100 people - Arabs and Jews - for his masters thesis about what happened at Tantura, one of the 553 coastal Palestinian villages destroyed in 1948 by the new Israeli state. According to the eyewitnesses and participants Katz interviewed, some 270-280 villagers were slaughtered in a massacre orchestrated by the Alexandroni Brigade. Once Katz story prematurely went public, to the chagrin of Katz, Haifa University tried to disassociate itself from their graduate student and his thesis, although it had previously approved it and recommended for honors. nt was “just using the fight to isolate progressive Zionists” like himself and push the Jewish support base for Israel in the US further to the right. He worried that the financing of campus anti-BDS campaigns by such hard-right billionaires makes it more difficult to defend Israel.

Leading Jewish mega-donors have summoned pro-Israel activists for a closed-door meeting in Las Vegas to establish, and fund, successful strategies for countering the wave of anti-Israel activity on college campuses. The meeting, taking place this weekend, will be hosted by casino billionaire Sheldon Adelson and was organized by several other top Jewish funders, including Hollywood entertainment mogul Haim Saban, Israeli-born real-estate developer Adam Milstein and Canadian businesswoman Heather Reisman...The planned Vegas summit marks a shift in approach on the issue of anti-Israel activity on college campuses, whose growth in recent years has captured a top spot on the Jewish communal agenda,

Adelson's lavish funds are financing...a campaign against pro-Palestine groups on US college campuses and has funded a group that has publicly accused individual students of supporting terrorism and promoting “Jew Hatred”.

The multimillion-dollar effort, which has launched at six campuses in California, is targeting the boycott, divestment and sanctions (BDS) movement that has become increasingly popular among American university students protesting the Israeli government.

At the University of California, Los Angeles (UCLA), recent posters named 16 students and professors, saying they “have allied themselves with Palestinian terrorists to perpetuate BDS and Jew Hatred on this campus”. It further claimed BDS was a “Hamas-inspired genocidal campaign to destroy Israel”.

One pro-Israel US advocate recognises that the BDS movement

"has made considerable strides at the grassroots level, with civil society, on campuses, labor unions and churches. As a 2016 Pew Research survey indicates, American millennials, including Jews, are far less sympathetic towards Israel than their older counterparts. In certain progressive, and some liberal spaces, Israel is becoming a pariah state."

It’s kindergarten-obvious that the casino billionaire’s new anti-BDS crusade will not only fail but will quite possibly prove counterproductive. Everyone who understands the boycott, divestment and sanctions movement knows that its recruits are progressives, and that what tips them toward BDS is despair that there seems no other way to end Israel’s immoral, undemocratic control of the West Bank and Gaza Strip...

Adelson, one of the most famous anti-progressives in America, and a man determined to ensure that Israeli control of the West Bank and Gaza never ends. To lead the anti-BDS summit he convened last weekend, Adelson recruited Rabbi Shmuley Boteach, a former Republican candidate for Congress...

Boteach invited right-wing organizations opposed to the two-state solution like Christians United for Israel and the Zionist Organization of America, along with the David Horowitz Freedom Center, which recently declared that U.S. President Barack Obama “has gone back and forth between Christianity and Islam like a philanderer in a bar” and accused the Black Lives Matter movement, which was sparked by the 2012 shooting death of African American teenager Trayvon Martin, of being “one of the most destructive, hateful, racist movements in living memory.”