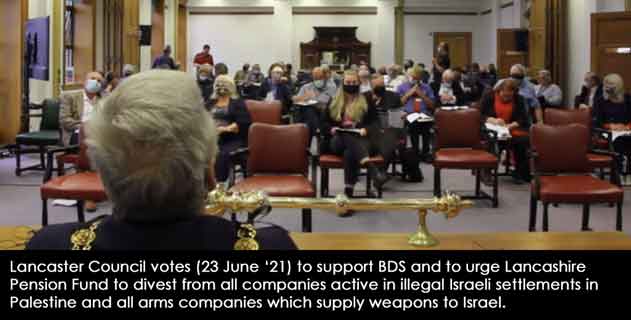 SCOTTISH PENSION FUND DIVESTMENT
27 JUNE On this day in 2018, the £2.3 billion Falkirk Pension Fund Committee and Board ratified a decision to divest £6m in funds from Israeli Bank Hapoalim, which facilitates Israeli war crimes. In a letter to Time to Divest, Stirling Council Leader Cecil Meiklejohn said she hoped the divestment would “reassure you as to the integrity of the Council”. Tayside Pension Fund ended their investments in Bank Hapoalim six months later, and in 2021 Lothian Pension Fund dumped holdings in the Israeli bank.

SPSC not only welcomes the decision by Falkirk Pension Fund to divest from Israeli Bank Hapoalim, but also the rationale for reaching that decision. The Scottish pension fund, which manages £2.3 billion in the pension funds for Falkirk, Stirling and Clackmannanshire Councils, sold off its £6m holding in Bank Hapoalim following an assessment by the Fund Manager that concluded the political and reputational risks associated with Israeli Bank Hapoalim were significant.

The Fund management had earlier “challenged the Bank on several occasions regarding their activities in the Occupied Territories and their approach to human rights” and reported that Bank Hapoalim “admits that it provides mortgages to customers in the occupied territories” despite, as Falkirk Pension Fund notes, “business activity in the occupied territories is generally considered a breach of international law”.

"Johnson wants to pass a law banning local councils from joining the Boycott, Divestment and Sanctions (BDS) campaign against Israel, the UK’s special envoy for post-Holocaust issues has announced. Eric Pickles said the movement was “antisemitic and should be treated as such” during a speech at the International Institute for Strategic Dialogue’s conference in Jerusalem on Sunday".

But it won't be easy
The European Human Rights Court (EHCR) ruled that a French criminal conviction against activists involved in a campaign to boycott products imported from Israel had no sufficient grounds and violated their freedom of expression.

Proposing the motion, Councillor O’Dwyer-Henry said: “(Israel’s) human rights abuses and breaches of international law are egregious and undeniable, by voting for this motion we can play our small part in a global movement of BDS in opposition to the daily death and destruction unleashed on Palestine. “By voting for this motion we will be sending a message to the government, which is planning on introducing new laws banning councils from exercising our democratic rights to support BDS.”

3-minute video: repression of US pro-Palestine activists on campuses
https://youtu.be/EIni_3TYg-A