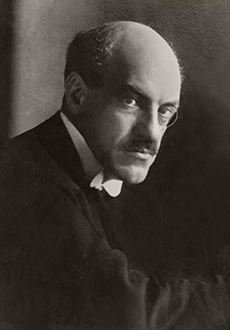 On this day in 1917, Sir Edwin Montagu, the sole Jewish member of the cabinet, opposed the Balfour Declaration as anti-semitic. He denounced “the mischievous political creed of Zionism [and asserted] that there is not a Jewish nation”. He believed Zionism “forces a nationality upon people who have nothing in common” apart from a shared religion and that this meant Jewish supremacy in Palestine rather than “equality with the inhabitants of that country who profess other religious beliefs”.

Root and branch denunciation of the inherent anti-semitism and oppressiveness of Zionism from this aristocratic Englishman.  Here are extracts from
"Memorandum of Edwin Montagu on the Anti-Semitism of the Present (British) Government
Submitted to the British Cabinet, August, 1917

"...I wish to place on record my view that the policy of His Majesty’s Government is anti-Semitic and in result will prove a rallying ground for Anti-Semites in every country in the world...I do feel that as the one Jewish Minister in the Government I may be allowed by my colleagues an opportunity of expressing views which may be peculiar to myself, but which I hold very strongly...

"Zionism has always seemed to me to be a mischievous political creed, untenable by any patriotic citizen of the United Kingdom. If a Jewish Englishman sets his eyes on the Mount of Olives and longs for the day when he will shake British soil from his shoes and go back to agricultural pursuits in Palestine, he has always seemed to me to have acknowledged aims inconsistent with British citizenship and to have admitted that he is unfit for a share in public life in Great Britain, or to be treated as an Englishman. I have always understood that those who indulged in this creed were largely animated by the restrictions upon and refusal of liberty to Jews in Russia. But at the very time when these Jews have been acknowledged as Jewish Russians and given all liberties, it seems to be inconceivable that Zionism should be officially recognised by the British Government, and that Mr. Balfour should be authorized to say that Palestine was to be reconstituted as the “national home of the Jewish people”.

I do not know what this involves, but I assume that it means that Mahommedans and Christians are to make way for the Jews and that the Jews should be put in all positions of preference and should be peculiarly associated with Palestine in the same way that England is with the English or France with the French, that Turks and other Mahommedans in Palestine will be regarded as foreigners, just in the same way as Jews will hereafter be treated as foreigners in every country but Palestine. Perhaps also citizenship must be granted only as a result of a religious test.

I lay down with emphasis four principles:

I assert that there is not a Jewish nation. The members of my family, for instance, who have been in this country for generations, have no sort or kind of community of view or of desire with any Jewish family in any other country beyond the fact that they profess to a greater or less degree the same religion. It is no more true to say that a Jewish Englishman and a Jewish Moor are of the same nation than it is to say that a Christian Englishman and a Christian Frenchman are of the same nation: of the same race, perhaps, traced back through the centuries – through centuries of the history of a peculiarly adaptable race. The Prime Minister and M. Briand are, I suppose, related through the ages, one as a Welshman and the other as a Breton, but they certainly do not belong to the same nation.

When the Jews are told that Palestine is their national home, every country will immediately desire to get rid of its Jewish citizens, and you will find a population in Palestine driving out its present inhabitants, taking all the best in the country, drawn from all quarters of the globe, speaking every language on the face of the earth, and incapable of communicating with one another except by means of an interpreter. I have always understood that this was the consequence of the building of the Tower of Babel, if ever it was built, and I certainly do not dissent from the view, commonly held, as I have always understood, by the Jews before Zionism was invented, that to bring the Jews back to form a nation in the country from which they were dispersed would require Divine leadership.

I have never heard it suggested, even by their most fervent admirers, that either Mr. Balfour or Lord Rothschild would prove to be the Messiah.

I claim that the lives that British Jews have led, that the aims that they have had before them, that the part that they have played in our public life and our public institutions, have entitled them to be regarded, not as British Jews, but as Jewish Britons. I would willingly disfranchise every Zionist. I would be almost tempted to proscribe the Zionist organisation as illegal and against the national interest. But I would ask of a British Government sufficient tolerance to refuse a conclusion which makes aliens and foreigners by implication, if not at once by law, of all their Jewish fellow-citizens.

I deny that Palestine is to-day associated with the Jews or properly to be regarded as a fit place for them to live in. The Ten Commandments were delivered to the Jews on Sinai. It is quite true that Palestine plays a large part in Jewish history, but so it does in modern Mahommendan history, and, after the time of the Jews, surely it plays a larger part than any other country in Christian history.

The Temple may have been in Palestine, but so was the Sermon on the Mount and the Crucifixion. I would not deny to Jews in Palestine equal rights to colonisation with those who profess other religions, but a religious test of citizenship seems to me to be the only admitted by those who take a bigoted and narrow view of one particular epoch of the history of Palestine, and claim for the Jews a position to which they are not entitled. If my memory serves me right, there are three times as many Jews in the world as could possible get into Palestine if you drove out all the population that remains there now. So that only one-third will get back at the most, and what will happen to the remainder?

I can easily understand the editors of the Morning Post and of the New Witness being Zionists, and I am not in the least surprised that the non-Jews of England may welcome this policy. I have always recognised the unpopularity, much greater than some people think, of my community. We have obtained a far greater share of this country’s goods and opportunities than we are numerically entitled to. We reach on the whole maturity earlier, and therefore with people of our own age we compete unfairly. Many of us have been exclusive in our friendships and intolerant in our attitude, and I can easily understand that many a non-Jew in England wants to get rid of us.

But just as there is no community of thought and mode of life among Christian Englishmen, so there is not among Jewish Englishmen. More and more we are educated in public schools and at the Universities, and take our part in the politics, in the Army, in the Civil Service, of our country. And I am glad to think that the prejudices against inter-marriage are breaking down. But when the Jew has a national home, surely it follows that the impetus to deprive us of the rights of British citizenship must be enormously increased.

Palestine will become the world’s Ghetto. Why should the Russian give the Jew equal rights? His national home is Palestine. Why does Lord Rothschild attach so much importance to the difference between British and foreign Jews? All Jews will be foreign Jews, inhabitants of the great country of Palestine. I do not know how the fortunate third will be chosen, but the Jew will have the choice, whatever country he belongs to, whatever country he loves, whatever country he regards himself as an integral part of, between going to live with people who are foreigners to him, but to whom his Christian fellow-countrymen have told him he shall belong, and of remaining as an unwelcome guest in the country that he thought he belonged to.

I am not surprised that the Government should take this step after the formation of a Jewish Regiment, and I am waiting to learn that my brother, who has been wounded in the Naval Division, or my nephew, who is in the Grenadier Guards, will be forced by public opinion or by Army regulations to become an officer in a regiment which will mainly be composed of people who will not understand the only language which he speaks – English.

I can well understand that when it was decided, and quite rightly, to force foreign Jews in this country to serve in the Army, it was difficult to put them in British regiments because of the language difficulty, but that was because they were foreigners, and not because they were Jews, and a Foreign Legion would seem to me to have been the right thing to establish. A Jewish Legion makes the position of Jews in other regiments more difficult and forces a nationality upon people who have nothing in common.

I feel that the Government are asked to be the instrument for carrying out the wishes of a Zionist organisation largely run, as my information goes, at any rate in the past, by men of enemy descent or birth, and by this means have dealt a severe blow to the liberties, position and opportunities of service of their Jewish fellow-countrymen...

11-minute interview with Israeli author Shlomo Sand. Full of insights but SPSC would disagree with his views - at 9 minutes in - on the Palestinian right of return. Two of Shlomo Sand's books - The Invention of the Jewish People and the later The Invention of the Land of Israel - were months on the best sellers list in Israel. He spoke at SPSC meetings in 2010.

Luke L 6 months ago 10 April
Also on April 10 (1948) albert Einstein wrote:https://lettersofnote.com/2010/03/04/when-a-real-and-final-catastrophe-should-befall-us/
Lofty 6 months ago 17 November
On 17 November Zionist fake 'anti-racist' orhganisation Hope not Hate issued a statement with Community, the only trade union to ...
Peter 6 months ago 10 June
https://www.facebook.com/stretfordhigh/posts/4101122909934164Nicola Doward, Headmistress of Stretford High School ended her effort to steal the funds children had collected for the Palestinian ...
Peter 6 months ago 4 May
On 4 May 2016 Maj Gen Yair Golan told a Holocaust memorial event in Israel: “Because if there is anything ...
Tom 6 months ago 3 November
Blue Flag is a biennial exercise that this year took place at Ovda Air Force Base, southern Israel, and saw ...