On this day in 2010, British-born journalist Jonathan Cook, based in Nazareth and married to a Palestinian explained why his previously frequent articles in the British main stream media had become rare: “As I began to gain a deeper understanding of the issues, and as I became a better reporter (according to everything I had been taught about the standards of “good professional journalism”), the less interest the mainstream media showed in my work”. Cook described how the Guardian moved to a complete ban on his articles.

"These disillusioning experiences came in the early stages of the second intifada, the Palestinian uprising that began in late 2000. At the time I was often writing for Britain’s Guardian newspaper, first as a staff member based in the foreign department at its head office in London and then later as a freelance journalist in Nazareth. The Guardian has earnt an international reputation – including in Israel – as the Western newspaper most savagely critical of Israel’s actions. That may be true, but I quickly found that there were still very clear, and highly unusual, limitations on what could be written about Israel.

During my years at the Guardian, I had regularly travelled to the Middle East from where I dispatched a number of reports. Only when I offered articles about Israel itself or the Israeli-Palestinian conflict did I sense a reluctance, even a resistance, to publishing them. The standard of proof required to print anything critical of Israel, it became apparent to me, was far higher than with other countries.

Particularly problematic for the Guardian – as with other news media – was anything that questioned Israel’s claim to being a democracy or highlighted the contradictions between that claim and Israel’s Jewish self-definition. The Guardian’s most famous editor, C P Scott, who is still much revered at the paper, was an active and high-profile lobbyist for Jewish rights in what was then Palestine. He was also, as I was occasionally reminded by senior Guardian staff, instrumental in bringing about the Balfour Declaration – the British government’s commitment to the Zionist movement in 1917 to create a “national home” for the Jews in Palestine.

Thus, I was not entirely surprised that an account I submitted based on my investigations of an apparent shoot-to-kill policy by the Israeli police against its own Palestinian citizens at the start of the second intifada was sat on for months by the paper. Finally, after I made repeated queries, the features editor informed me that he could not run it because it was no longer “fresh”.
Read more

Television news is the main source of information on the Israel-Palestine conflict for about 80% of the population. Yet the quality of what they see and hear is so confused and partial that it is impossible to have a sensible public debate about the reasons for the conflict or how it might be resolved.

This is the conclusion of exhaustive research by the Glasgow University Media Group, which brought journalists, academics and ordinary viewers together to study the influence of news on public understanding. More than 800 people were interviewed and researchers examined around 200 news programmes. Senior journalists told researchers that they were instructed not to give explanations - the focus was to be on live action. As Paul Adams, the BBC defence correspondent, put it: "It's covered as if it's a very large blood feud and, unless there's a large amount of blood, it's not covered." George Alagiah stressed a belief in the BBC that the attention span of viewers is about 20 seconds.

Israeli snipers opened fire on the Gaza marchers. With nowhere to run, casualties and fatalities were certain. Those killed included women, children, elderly people, and journalists. As Amnesty International commented in a statement condemning the massacre:

Early medical reports from Gaza today indicate that dozens of people have been shot in the head or chest. Amnesty International last month documented research from the Gaza Strip that showed the Israeli military were killing and maiming demonstrators who pose no imminent threat to them. 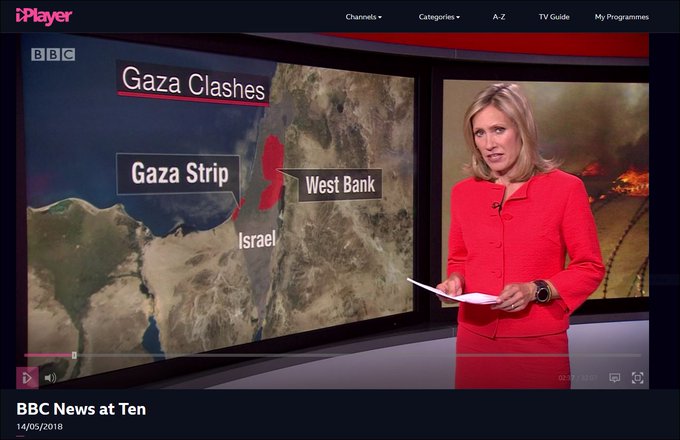 The BBC and other Western media outlets dutifully regurgitated Israeli propaganda. They wrote of “clashes” at the “border”. They made it sound as if Palestinians had invaded Israel, and that Israel was merely defending itself from the siege. No mention of the wall, or the decade-long Israeli blockade which has created a humanitarian crisis in Gaza. And no mention of international law. Because Israel is occupying Palestinian land illegally.

Israel does not have the right to ‘self-defence’ as the agitator and occupier. But the Palestinian people do have a right to armed resistance in response to illegal occupation.