On this day in 1908, the first issue of Al-Karmil, a bi-weekly Arabic-language newspaper, stated its purpose was to "oppose Zionist colonization". Founder Najib Nassar, a Palestinian Christian, warned of the dangers posed by Zionism to the Palestinian people. He spoke out against Turkish entry into WWI and had to go on the run for three years, living with Bedouin goat herders and narrowly escaping capture. In March 1939 the British jailed Najib’s wife, Sadhij, without trial as "a menace to public security".

Al-Karmil and another early Arab Palestinian newspaper, Filastin,  were "instrumental in shaping early Palestinian national consciousness and in stirring opposition to Zionism." Almost immediately after the publication of its first issue in December 1908, al-Karmil "became the primary vehicle of an extensive campaign against Zionist settlement in Palestine." Khalidi, Palestinian Identity: The Construction of Modern National Consciousness,

Through buying a few acres in Tiberias he became intimately acquainted with the methods of Zionist settlement and their effect on the peasants.

In 1905 he began a campaign aimed at exposing Zionism and its ambitions and published articles on the subject in the newspapers al-Muqattam in Cairo and Lisan al-hal in Beirut. Following the proclamation of the Ottoman constitution, Nassar sold all his property and bought a press in Beirut. In 1908 he founded in Haifa a newspaper, al-Karmel, which appeared twice weekly. Nassar persisted in calling attention to the Zionist menace that threatened the country.

As a result of a Zionist campaign against him, the Ottoman authorities closed down his newspaper in June 1909 for two months. In 1910, the Ministry of Justice in Istanbul ordered him to be put on trial when the Jewish community raised a case against him accusing him of “sectarian divisions and incitement.” However, the court found him innocent of that charge.

Nassar wrote a series of articles in al-Karmel, which were collected in October 1911 in a small volume called Zionism: Its History, Aims and Significance (in Arabic). He derived his information from an article on Zionism in the Jewish Encyclopedia.

In 1913 he called for the convening of a congress from which would issue a “national non-Zionist society” headquartered in Nablus and devoted to “preserving the country for its people through developing their agricultural, economic and scientific affairs and creating social harmony among them.”

In the summer of 1914 Nassar called on Palestinian youth to work independently of their traditional leaders and to be self-reliant in seeking to improve conditions in the country and to bring moral pressure to bear on Arab landowners not to allow their lands to be transferred to Jews.

He opposed the entry of Turkey into World War I on the side of Germany and was forced to go into hiding. He first sought to hide with the Fahum family in Nazareth and then with the tribe of Sardiyya in Transjordan where he worked as a shepherd for two and a half years. Finally, he decided to turn himself in and was taken to the Military Tribunal in Damascus.  He received a pardon before the war’s end in 1918 and returned to Palestine.

Nassar renewed his social and political activities in Haifa following the British occupation of Palestine. He reissued his newspaper al-Karmel and called in it for the establishment of an Arab Economic Renaissance Society. In early November 1918 he took part in founding a political party called The Arab Party, but this did not last long. Thereafter, Nassar joined the Muslim–Christian societies that began to be formed throughout the cities of Palestine.

In 1920 he called for the establishment of Arab information offices in Europe in order to expose the true aims and plans of Zionism and warned against selling land to Jewish settlers. He further called for national unity in Palestine. Along with a number of intellectuals and newspaper editors, he joined in establishing societies to combat Zionism inside and outside Palestine.

Throughout the years of the British Mandate, Nassar continued to attack Zionism in his newspaper. His wife, Sadhij, his lifelong companion, helped him in editing al-Karmel, and in 1938 she was arrested and held for one year, charged with supplying the rebellion with arms. The Mandate authorities suspended al-Karmel several times and then closed it down permanently in 1944, in accordance with the Emergency Regulations that were enacted in 1939 to deal with the upcoming World War II.

At the end of his life, Nassar suffered a great deal as he saw all his fears and warnings about Zionism and its ambitions and plans come true. He was spared from witnessing the fall of Haifa, a city he loved, as well as the fall of his village, Balad al-Shaykh, to the Zionist forces in April 1948; he died in Nazareth on 12 March 1948 and was buried in that city.

Nassar was a man of great foresight, perspicacity, and steadfastness in his views and principles. He was a pioneer of political journalism in Palestine and was rightly named its father figure. He was also among the very first who made a thorough study of Zionism and persisted in calling attention to the threat it posed. Nassar was proud of his Arab identity and adopted the pen name “Muflih al-Ghassani” with some of his writings. 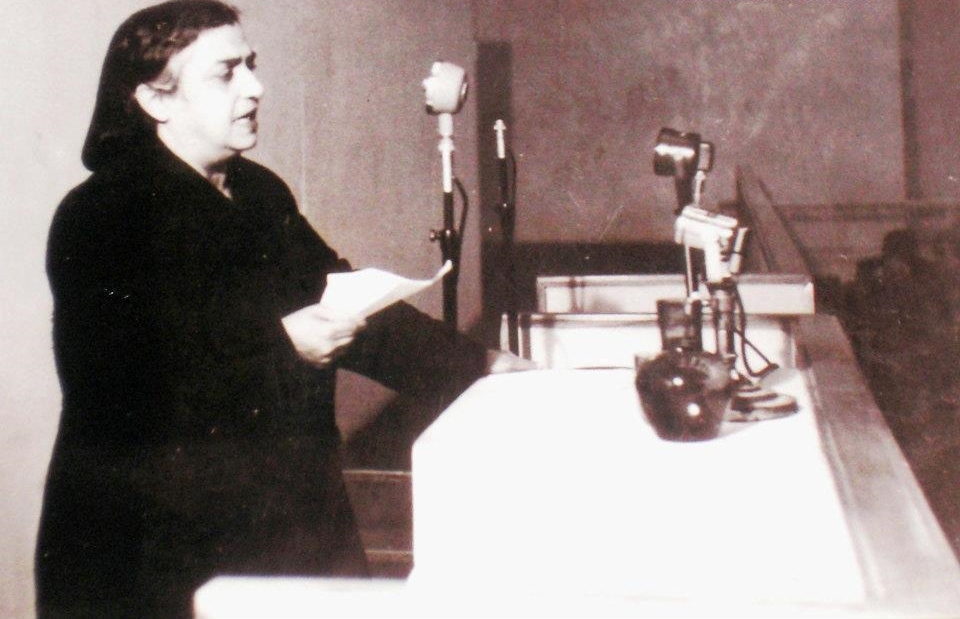 In 1938, Najib Nassar wrote his wife  - a “very dangerous woman” and a “prominent agitator” according to the British authorities - a letter in which he stated that if he did not make it into the pages of history because of his newspaper al-Karmel, he would surely make it because of her.

Sadhij Nassar was born in Haifa. In 1923 she started writing articles in the al-Karmel newspaper founded in Haifa in 1908 by her husband Najib Nassar. She later helped him edit and run that newspaper.

“The Women’s Section” dealt with social issues. Sadhij Nassar’s articles about women were distinguished by their libertarian spirit. She encouraged Palestinian mothers to raise their children on the basis of equality between boys and girls, called for educating the Palestinian woman and providing her with work opportunities, and attacked dominant social ills in society. She also encouraged Palestinian women to engage in political life and to contribute to resisting British and Zionist colonialism.

In addition, Nassar played a role in mobilizing and organizing Palestinian women. In 1930, she co-founded the Arab Women’s Union in Haifa, which played a prominent role in the General Strike of 1936. She also took part in the women’s demonstrations that accompanied that strike. Nassar was among the first to recognize the importance of organizing rural women and in getting them to join the national struggle. She worked hard to organize the women farmers of the Baysan district (among whom she lived for some time). Her efforts in this regard, however, proved unsuccessful.

Sadhij Nassar was a member of the Palestinian women’s delegation to the Eastern Women’s Congress for Palestine held in Cairo in the middle of October 1938. Nassar was elected secretary of the conference bureau. The conference called for an end to the British Mandate and the formation of a constitutional and sovereign state in Palestine, linked by treaty to Britain (as were Egypt and Iraq).

At the General Congress of Arab Women held at the Cairo Opera House in 1944 she delivered a speech at that conference urging the Arabs to work actively to save Palestine before it was too late.

Sadhij Nassar was the first Palestinian woman to be arrested by the British Mandate authorities because of her nationalist activities. The British arrested her in late 1938 and charged her with supplying arms to the Palestinian rebels, describing her as a “very dangerous woman” and a “prominent agitator.” She was held at the Bethlehem detention camp for eleven months. A wide local and international campaign was mounted to demand her release; her husband wrote her a letter in which he stated that if he did not make it into the pages of history because of his newspaper al-Karmel, he would surely make it because of her.

Following the Nakba of 1948, Sadhij Nassar sought refuge in Lebanon, where she published a series of articles in the newspaper al-Yawm about the tragedy of Palestine and the deterioration of conditions in it. After moving to Syria, she published her articles in Syrian newspapers such as al-Qabas.

She died in Damascus and was buried there.