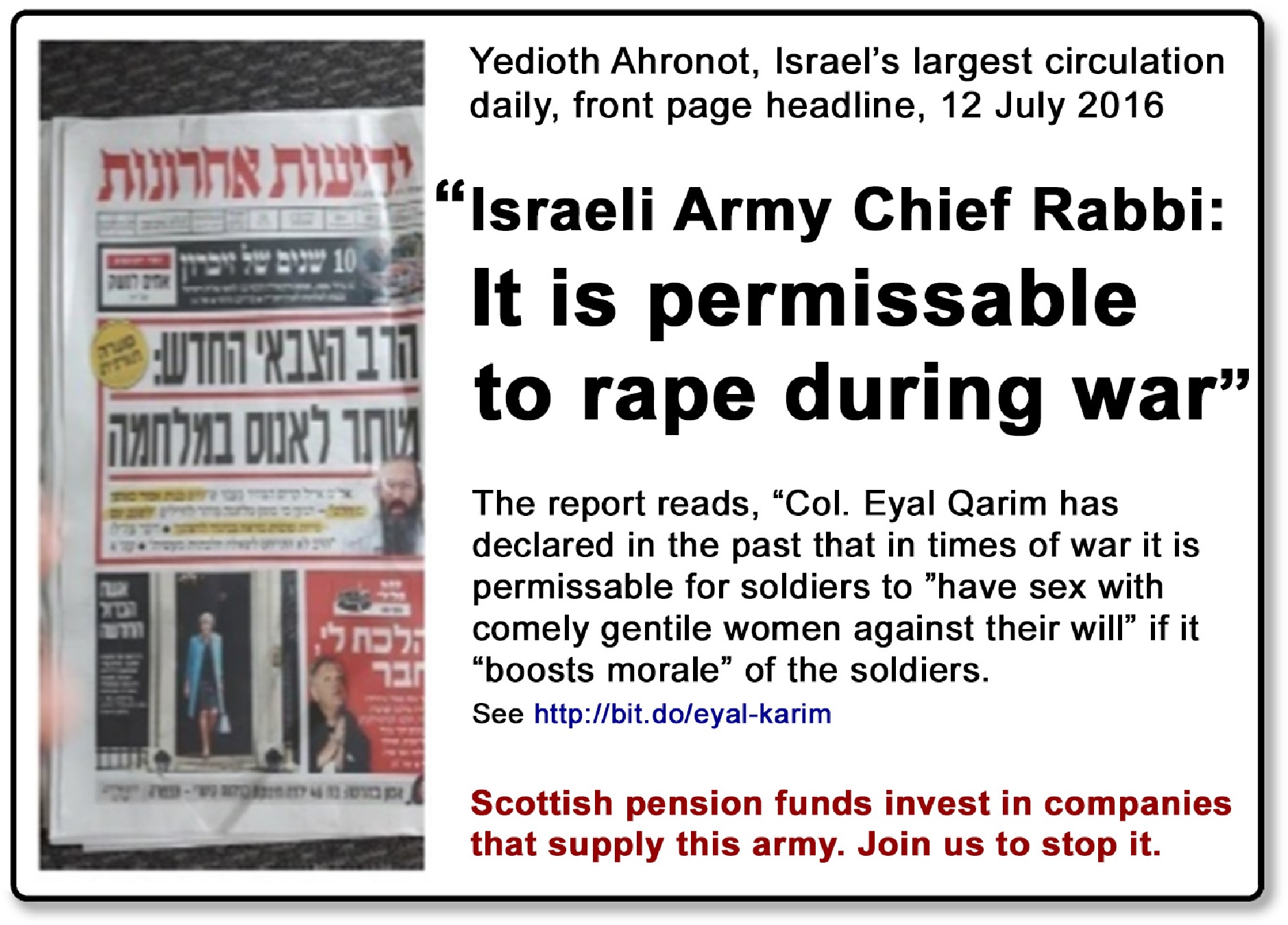 On this day in 2016, Eyal Karim was confirmed as the Israeli military chief spiritual guide. He had previously endorsed rape “during wartime out of consideration for the soldiers’ difficulties...And since our concern is the success of the collective in the war…[soldiers are] permitted to satisfy the evil urge”. The Israeli Army’s current chief spiritual guide also ruled that gay people should be treated as "ill or disabled" individuals, and that any Palestinian attacking the Army should not be treated as a human being, but as an "animal".

Israeli YNet news agency:
IDF's chief rabbi-to-be permits raping women in wartime
Col. Eyal Karim, the IDF's intended next chief rabbi, has previously provided misogynistic interpretations of Jewish law that consider female conscription 'utterly forbidden' and permits raping 'attracting Gentile women' as a way to keep up morale...when asked if soldiers were permitted to rape women during war. Karim replied that, as part of maintaining fitness for the army and the soldiers' morale during fighting, it is permitted to "breach" the walls of modesty and "satisfy the evil inclination by lying with attractive Gentile women against their will, out of consideration for the difficulties faced by the soldiers and for overall success....

"The head of the Knesset Committee on the Status of Women and Gender Equality, MK Aida Touma-Sliman (Joint Arab List), said, "Col. Karim's ruling on permitting raping non-Jewish women is similar to the fatwa of a murderous organization [ISIS] that's not so far from Israel's borders...

The Israeli Army Spokesperson's Office issued a reply: "Rabbi Karim has never written, said or even thought that an IDF soldier is permitted to sexually assault a woman in war — anyone who interprets his words otherwise is completely mistaken. Rabbi Karim's moral approach is attested by his years of military service in command, combat, and rabbinical positions in which he displayed complete loyalty to the values and spirit of the IDF."

The US Jewish Forward later ran an article
IDF Chief Rabbi Sorry for Remarks Justifying Wartime Rape
"Eyal Karim, the rabbi whose appointment as the chief chaplain of the Israeli army was suspended over his remarks on raping women, was sworn in to the position. Karim's appointment as the chief rabbi of the Israel Defense Forces follows a Supreme Court review of his suitability last month. The court found no reason to challenge the appointment. On Wednesday, Karim published a written statement reading: “I made a mistake when I gave a short answer to a complicated question. I was wrong because sometimes I was not precise with my words and some people found them offensive. I apologize...”

Miriam Naor, President of the Supreme Court, said in a statement last week that there was no reason to further delay Karim’s appointment."