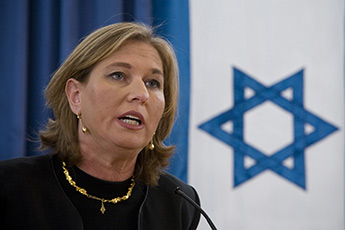 On this day in 2009, Israeli former Foreign Minister Tsipi Livni skipped a JNF meeting in London after Westminster Magistrates Court issued a warrant for her arrest for war crimes committed in Gaza earlier that year. Lawyers acting for some Palestinian victims had successfully sought the warrant. The Foreign Office under Labour’s David Miliband said, "The UK is determined to do all it can to promote peace in the Middle East and to be a strategic partner of Israel...We are looking urgently at the implications of this case."

Israel threatened to self-boycott
Israel hit back at Britain today over the arrest warrant issued for former foreign minister Tzipi Livni for alleged war crimes, warning that until the matter was resolved senior officials would not be visiting the UK...The row erupted at the weekend when Westminster magistrates court issued an unprecedented warrant for the arrest of Livni, now leader of the opposition Kadima party, who was foreign minister and a member of the war cabinet during the Gaza offensive earlier this year.

In 2005, a retired Israeli general, Doron Almog, returned to Israel after landing in London because he was tipped off that police planned to arrest him. The warrant for Almog – who allegedly oversaw the bombing of a Gaza building in which 14 people were killed – was later cancelled. Other Israeli leaders, including former military chief Moshe Yaalon and ex-Shin Bet security chief Avi Dichter, have cancelled trips to Britain in recent years for the same reason.

Livni is the proud daughter of a hard-line Irgun commander
“My family is part of the founding history of Israel,” she has said. Her father’s gravestone bears the inscription, “Here lies the head of operations of the Irgun” – The stone also bears a carved map of Greater Israel extending to the opposite side of the Jordan river.

Ms Livni is the daughter of Zionists classified as terrorists by the British authorities. Her father, Eitan, was the Irgun’s head of operations when it blew up the King David hotel in Jerusalem in 1946, killing 28 Britons, 41 Arabs, 17 Jews and five others.

Livni Senior's Irgun carried out numerous terrorist attacks on Palestinian civilians, including the infamous massacre of men, women and children in  Deir Yassin.

“Israel always valued its friendship with Britain. We share the same principles, the same interests, and in my opinion, we also share the same path – the right path – in order to deal with those challenges," said Livni.

5-minute video: Livni was scheduled to address a JNF event in London.    The Jewish National Fund is a racist UK charity supporting the ethnic cleansing of the Palestinian people.