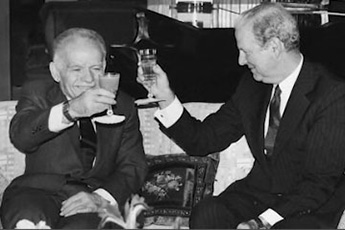 MAJOR VICTORY FOR ISRAEL TO CONCEAL ITS STATE RACISM
On this day in 1991, the UN rescinded Resolution 3379, entitled “Elimination of All forms of racial discrimination,” passed 16 years earlier that acknowledged that “Zionism is a form of racism and racial discrimination”. 3379 had been backed by 72 countries, the majority of the world’s population, with 35 opposed (and 32 abstentions). In a sign of how Israel had been stung by this 1975 defeat at the UN, Israel and the US demanded that it be revoked or they would refuse to participate in the Madrid Peace Conference.

Why is Israel so concerned with definitions - of itself, of its Zionist ideology, of its own identity, as a 'Jewish and democratic state'? Should not a country as militarily powerful as Israel be so comfortable with its own status and prowess, that is not bothered by the disparaging comments of an author, words of a diplomat or some marginal social media debate?

Yet, this is not the case. At the heart of Israel's very existence is a lurking sense of vulnerability, one that all the nuclear warheads and firepower cannot redeem.

Israel knows precisely what it is - a settler, colonial state - but rather than confronting its own demons, its past and equally grim present realities, it lashes out at those who dare point out that if Israel does not change, its future is likely to be horrifically bloody.

“Zionism is a form of racism and racial discrimination,” reads UN General Assembly Resolution 3379. The measure was adopted on Nov. 10, 1975, and the majority of the international community backed it.  Resolution 3379 made an indelible imprint on history.

in the same year the Assembly of the Heads of State and Government of the Organization of African Unity passed resolution 77, which ruled “that the racist regime in occupied Palestine and the racist regimes in Zimbabwe and South Africa have a common imperialist origin, forming a whole and having the same racist structure”

Also in the same year a Political Declaration and Strategy to Strengthen International Peace and Security and to Intensify Solidarity and Mutual Assistance among Non-Aligned Countries called Zionism a “racist and imperialist ideology.”

African hostility towards Zionism as an imperialist project was not just based on a general understanding but on the strategic alliance between apartheid South Africa and Israel: Moshe Sharett, the Israeli foreign minister, made his first visit to South Africa in 1950. In November 1984, when the UN had decided on sanctions against the apartheid regime, South African foreign minister Roelof Frederik “Pik” Botha visited Israel. Yitzhak Rabin was then Israel’s prime minister. Le Monde wrote of the “close ties between the two countries” and noted that Israel was the only country in the world to have relations with the puppet Bantustans, some of which were even twinned with Israeli West Bank settlements

Kerry added, “Why do we Americans care so much about the rights of others being respected? Because, in an interconnected world, injustice anywhere is a threat to justice everywhere. Times may change, but one thing we do know: America’s support for Israel’s dreaming and Israel’s security, that will never change.”

Kerry thanked Israeli UN Ambassador Danny Danon, who insists that God gave the land of historic Palestine to the Jewish people as an “everlasting possession”. He also told the Times of Israel that the “international community can say whatever they want, and we can do whatever we want.”

Netanyahu addressed the session with a video message. He claimed that Israel, which has for years led the world in violating UN Security Council resolutions, “continues to face systemic discrimination here at the UN.” In a January 2013 statement submitted to the UN Human Rights Council, the Russell Tribunal calculated Israel had defied a bare minimum of 87 Security Council resolutions.

4-minute video on Israeli racism towards Ethiopian Jews. Netanyahu: "There is no place for racism and discrimination in our society".