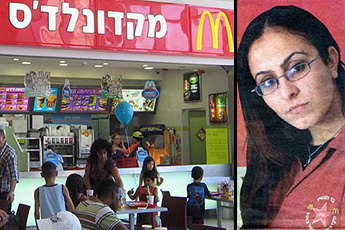 PALESTINIAN CITIZEN OF ISRAEL FIRED FOR SPEAKING ARABIC
On this day in 2003, Abeer Zinaty was sacked by McDonald’s for breaking a ban on speaking Arabic to another Arab employee in the workplace. Zinaty began work for the McDonald’s branch in Ramle, a mixed Arab and Jewish town between Tel Aviv and Jerusalem, in April 2001 and was awarded the title “Excellent Worker” in April 2003. As far as is known, Israel is the only country in the world where McDonald’s staff are ordered to talk only one language while on duty.

McBusted: McDonald’s manager admits that speaking Arabic led to firing
Abeer Zinaty's account flatly contradicts claims by McDonald’s head office in the United States that Zinaty’s dismissal had nothing to do with her speaking Arabic. McDonald’s managers, both in America and Israel, who separately responded to protests over Zinaty’s dismissal, offered starkly differing interpretations of the company’s policy on the speaking of Arabic in the workplace.

And the firm’s subsequent claims – in the face of mounting bad publicity – that Zinaty was fired instead for a poor work record are apparently not supported by evidence that McDonald’s ever initiated a disciplinary procedure against her or sent her letters of warning. They also fly in the face of the company’s decision six months earlier to award her “Excellent Worker 2003”.

Zinaty began work for the McDonald’s branch in Ramle, a mixed Arab and Jewish town close between Tel Aviv and Jerusalem, in April 2001 and was awarded the title “Excellent Worker” two years later, in April 2003.

She was fired months later, on December 21, when she was called in on her day off to see the branch manager, Hazem Natche, an Arab from East Jerusalem. “There had been some discussion that I was in line for promotion so when I got the call I was sure it was to offer me a more senior job in the company. I couldn’t believe it when he said I was being fired. He told me there were several problems with my work but that the main thing was that I was talking too much Arabic.”

McDonald’s has emphasised that Natche himself is an Arab, thereby implying that his decision was not racially motivated. However, Zinaty observes that Natche – who is the regional inspector supervising six branches in Israel – had instructed workers not to speak Arabic in front of customers and refused to speak any Arabic at work himself.

“One of the topics of conversation among the Arab workers was why he always spoke Hebrew, even in private in his office. The general view was that he had received orders from head office that Arabic should be banned on the premises.”

She added: “When he fired me – even though only the two of us were in the room – he spoke the whole time in Hebrew. It was crazy: an Arab telling another Arab that she was fired in Hebrew. I was confused and so scared to reply in Arabic that I left without saying anything to him.”

Despite the subsequent claims of the company that the sacking of Zinaty had nothing to do with her speaking Arabic, Natche himself contradicts that position. In a handwritten letter to a local Arab newspaper, sent on February 5 by McDonald’s PR company in Israel, Tikshoret Asakim, he justifies his decision on several grounds including that: “Abeer Zinaty spoke Arabic to her Arabic co-workers while she was on duty, even though Abeer knows that Hebrew is the language for interpersonal communications at work, in order that her colleagues whether new immigrants or Jews understand the orders sent to the kitchen.”

It has repeatedly stated in all correspondence that there is a ban in the workplace on Arabic, which is spoken as a first language by nearly 20 per cent of Israel’s population.

Julie Pottebaum, a spokeswoman for McDonald’s US head office, based in Illinois, told the Electronic Intifada on March 5 that Hebrew “is required to be spoken when on duty in order to best conduct business and best serve our customers”. This response was disturbing, given that such a policy appears to violate Israel’s Equal Opportunities in Employment Law, which outlaws discrimination on the basis of race or nationality. Arabic, along with Hebrew, is an official language of the state. [Since demoted by Israel's Nation State Law].

As far as is known, Israel is the only country in the world where McDonald’s staff are ordered to talk only one language while on duty.

Irina Shalmor, a spokeswoman for McDonald’s Israel, told Electronic Intifada on March 7 that Zinaty was causing trouble at the branch so that she would be made redundant and could claim unemployment benefit.

After examining Zinaty’s dismissal, the Knesset Committee on Labour, Welfare and Health issued a statement on February 23 admonishing McDonald’s for firing Zinaty, which it called an “inhumane and immoral” act, and demanding that she be reinstated in the Ramle branch.

Zinaty, however, is not hopeful that she will ever be reinstated. “McDonald’s is big and wealthy enough to ignore my problems,” she said. She added that she had heard that two other McDonald’s workers in Israel had been fired for speaking Arabic but, unlike her, they were too frightened to come forward. “These sackings are working. People really are too scared to talk Arabic at work in McDonald’s.”

The status of Arabic language downgraded in Israel
Arabic was an official language of the State of Israel for 70 years, two months, and five days. As of July 19, 2018, it is no longer. The status of Arabic as an official language, the first language of at least 20% of Israeli citizens, was abolished.
The Jewish Nation-State Law states, implicitly and explicitly, that Israel belongs not to all of its citizens, over 20 percent of whom are not Jewish. Instead, it declares that Israel belongs to the Jewish people, some half of whom are not Israeli citizens.