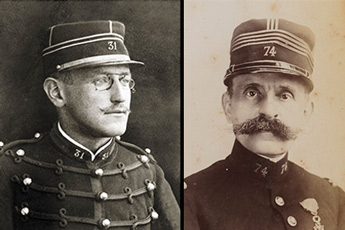 On this day in 1894, Captain Alfred Dreyfus was wrongly convicted of treason and exiled to Devil’s Island in French Guiana. A bitter struggle – broadly between left and liberal supporters of Dreyfus and right-wing, mainly Catholic opponents - was successful in exonerating Dreyfus. Herzl later claimed, strangely, that the Dreyfus affair was the key event in convincing him that Jews should not live in Europe, because anti-Semitism could and should not be resisted and that anti-Semites were justified in their hostility to Jews.

Alfred Dreyfus, a French artillery captain and a Jew, was falsely accused of spying for Germany, for which he spent over four years in solitary confinement on the remote and tropical Devil's Island. To this end, top French military officers forged documents, suppressed information, perverted the military tribunal system, and abused their subordinates. They were backed by right-wing and clerical anti-Dreyfusards, who mobilized anti-Semitic riots, spread nationalist propaganda, marshalled conservative obstruction - even planned a political assassination. Liberal and socialist Dreyfusards, sparked by Émile Zola's heroic polemic "J'Accuse," supported the innocent man with an ultimately successful press campaign to pressure government officials and civilian courts to intervene.

"I was turned into a Zionist by the Dreyfus case. For the Jews there is no other help and salvation than to return to their own nationhood and and settle in their own land and territory. That is what I wrote in my book The Jewish State in 1895 under the shattering impression of the first Dreyfus case."

With very few exceptions almost any recent book or article that alludes to Herzl's conversion to Zionism... ascribes a leading role to the Dreyfus Affair...Even though Herzl expressly stated in 1899 that the Dreyfus case had made him a Zionist, it was at best an appropriate myth, a dramatic foreshortening of the facts.

The French fight against the reactionary, right-wing, militarist and Catholic clericalists was successful. Dreyfus attracted the support of the great French author Emile Zola who penned his celebratedJ'accuse! in Dreyfus' defence. The victim of the conspiracy by anti-semitic forces was victorious and was finally reinstated to his military rank.

The Affaire Dreyfus at the end of the 19th Century in France could more easily be argued to support the need to fight the anti-semites, the possibility of success, than Herzl's later advice to ally with the anti-semites against the left, and to ally with European colonial powers to violate a people the Zionists sought to expel and replace, whether in Kenya, Madagascar or Palestine.

Herzl, wrote “I achieved a freer attitude toward anti-Semitism, which I now began to understand historically and to pardon. Above all, I recognized the emptiness and futility of trying to ’combat’ anti-Semitism.”

That conclusion has been an axion of Zionism since Herzl and guides the leaders of political Zionism till today in embracing Trump, rabid Christian Zionists, and anti-semitic, pro-Israel forces the world over. But the Affaire Dreyfus did not push Herzl at the time towards his Zionist conclusions - the impetus came from elsewhere, principally Vienna - and it points still to the falseness of the views that Herzl later promoted: "The anti-Semites will become our most dependable friends, the anti-Semitic countries our allies."