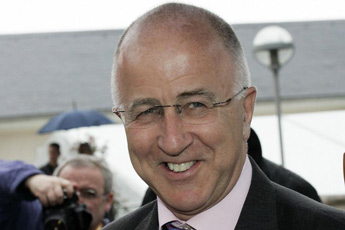 On this day in 2013, Labour Denis MacShane MP started six months' jail time for bogus expenses fraud. During a career of cheating and dishonesty, McShane was consistently pro-war and pro-Israel as a member of the extreme-right Henry Jackson Society. MacShane led the effort in Westminster to conflate criticism of Israel with supposed anti-Semitism. He was on the board of Just Journalism, a pro-Israeli group which presented itself as a neutral voice but shared an office with the Henry Jackson Society.

Former BBC journalist MacShane, born Josef Denis Matyjaszek, claimed for research and translation work supposedly done by an organisation called the European Policy Institute (EPI), a research body he had set up in 1992. In fact, the EPI had not done any work and the money went straight to MacShane.

The list of Henry Jackson Society patrons reads like a roll call of hawks: William Kristol of the rightwing Weekly Standard, the former Nato commander General Jack Sheehan and the ex-CIA director James Woolsey, among others. The supporters include a smattering of spooks, diplomats, Times journalists and grandees whom recent events have treated badly: David Trimble, Colonel Tim Collins, Irwin Stelzer (another Cameron fan) and the former head of MI6, Sir Richard Dearlove...pro-EU former minister for Europe, Denis MacShane, has signed up.

HJS member  MacShane jumped the gun in 2002 by attacking President Hugo Chávez of Venezuela as a 'ranting, populist demagogue' comparable to Mussolini during a failed military coup to depose the democratically elected president. Afterwards, MacShane had to claim publicly that the UK Government in fact deplored the coup attempt.

Six months earlier the crook had published a right-wing screed supporting the invasion and occupation of Afghanistan, under the name of fellow Labour MP Khalid Mahmood. The article was entitled, "The Five Myths Muslims Must Deny". A few days later however, it was revealed that the article had not in fact been written by Mahmood, but by MacShane.

MacShane was bouncing back by 2018 after doing his porridge, and used the pages of the Independent to boast that

"I published a book called Globalising Hatred: the New Antisemitism. It grew out of a House of Commons all-party committee inquiry into antisemitism I set up and chaired in 2005. It was around the same time concerns grew about the...right of Jewish people to have a tiny corner of the world in which they could live free of fear behind the agreed borders the state of Israel accepted in 1949."

In April 2013, a few months before he was charged under the Theft Act 1968, MacShane and his fellow Labour MP John Mann testified at a 20-day legal effort to smear the University and College Union as institutionally anti-semitic. The panel of three judges dismissed all the complaints against the union  as “palpably groundless”, “obviously hopeless” and “devoid of any merit” and the whole effort as a “sorry saga”. They further condemned the complaints as “an impermissible attempt to achieve a political end by litigious means” and a case which showed a “worrying disregard for pluralism, tolerance and freedom of expression”. Jonathan Goldberg QC, commented: “This enormous but legally flawed lawsuit was an act of epic folly by all concerned."

MacShane and Mann's claims of expertise in the matter of anti-semitism were tested in the witness box where their “glib evidence” was dismissed by the judges in a damning part of their ruling:

We did not derive assistance from the two Members of Parliament who appeared before us. Both gave glib evidence, appearing supremely confident of the rightness of their positions. For Mr MacShane, it seemed that all answers lay in the MacPherson Report (the effect of which he appeared to misunderstand). Mr Mann could manage without even that assistance. He told us that the leaders of the Respondents were at fault for the way in which they conducted debates but did not enlighten us as to what they were doing wrong or what they should be doing differently. He did not claim ever to have witnessed any Congress or other UCU meeting. And when it came to anti- Semitism in the context of debate about the Middle East, he announced, “It’s clear to me where the line is … ” but unfortunately eschewed the opportunity to locate it for us. Both parliamentarians clearly enjoyed making speeches. Neither seemed at ease with the idea of being required to answer a question not to his liking.